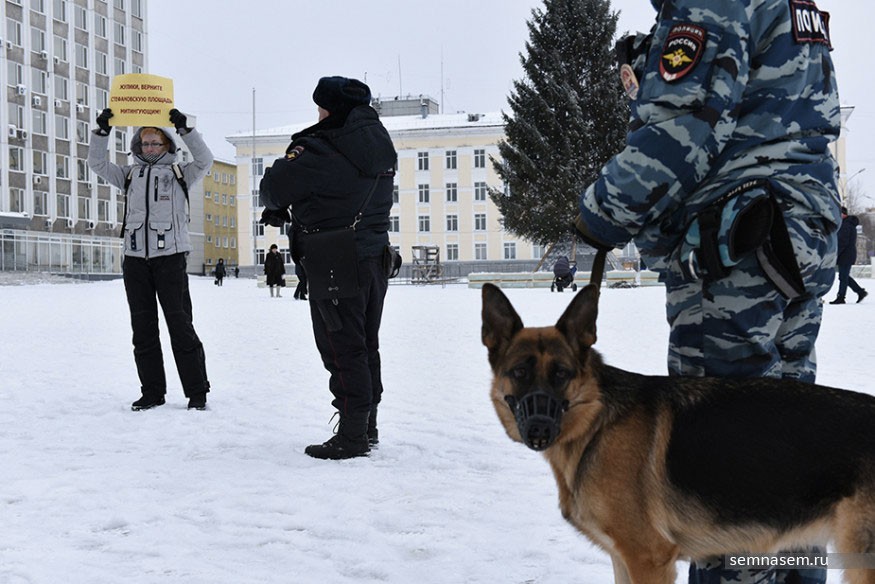 The solitary picket of Tatiana Ivanova in front of the regional government building lasted only 15 minutes.
By

A single picket of Tatiana Ivanova started at about 12:15 on the main square of Syktyvkar, the capital of the Komi Republic. She stood in front of the entrance to the regional administration building and held a poster which read «Cheaters, return the Stefanovskaya Square to protesters». She chose the Constitution Day of Russia, which is celebrated on December 12, because she believes that articles of the basic laws of the country are not observed, for example the article No. 31 on freedom of peaceful assembly, rallies, pickets, processions and demonstrations.

«They banned rallies on Stefanovskaya Square. Why are they encroaching on our rights? I protest against it. They wrote this law for themselves, for their convenience, not for people,» said Ivanova.

After five minutes two policemen approached the woman. One of them called her actions illegal and asked her to remove the poster. Ivanova refused, and the policeman called in the squad.

After 15 minutes the police traffic squad arrived. Policemen invited Ivanova to move over to the car, but the woman refused. Then she was then taken by the elbows, brought to the car and taken to the duty unit.

Syktyvkar resident Tatyana Ivanova was an active participant against the law related to compensation for kindergartens. She was one of the initiators of the protests in Syktyvkar. The court overturned the law, but the Komi State Council challenged this decision.