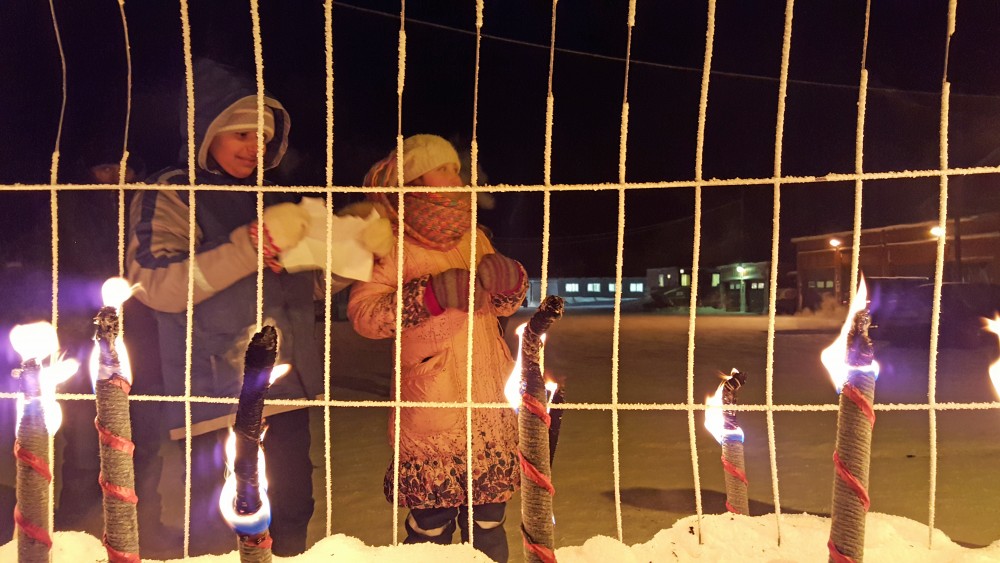 This boy and a girl are among the asylum seekers at the Reception Centre Finnmark near the airport in Kirkenes, a 20 minutes drive from Norway's border to Russia. Photo: Thomas Nilsen

Norwegian Police Immigration Service collectively detained all remaining 82 persons, including 15 children, at the camp after three migrants left for a nearby church. The children were later released after journalists started to ask questions.
By

“Yes, everyone is detained,” says Chief of Police Immigration Service in Kirkenes, Tor Espen Haga to the Norwegian newspaper VG. It was newswire NTB that first reported about the detention this morning.

The decision to detain everyone at the camp came after three of the persons on Thursday fled and took protection in the local church in Kirkenes. Five others, including children, were stopped on the road and brought back. The driver of the car, a local Norwegian woman, were also arrested, but released later in day after accepting a fine from the police.

Also two other Norwegians were detained on Thursday after they, according to the police, were transporting asylum seekers with no legal stay in Norway.

Among the people in the camp is a family with a child that have fled the war in Syria. Yesterday the Immigration Appeals Board (UNE) said they would look into the case for this family again.

There are several other children at the Reception Centre of different nationalities. In total, 15 children were detained, the yngest born in 2014, according to VG.

Some few hours after the detention became public Friday morning, the Police Immigration Service made a turnaround and released the families with children.

«All families with children are now released,» informs Tuva Otterlei Blikom with the Police Immigration Service in en e-mail to the Independent Barents Observer Friday evening.

After the dramatic developments on Thursday, the police are now lined up near the gate to the Reception Centre with cars and personnel.

Tor Espen Haga told the Independent Barents Observer on Wednesday that all persons in the centre outside Kirkenes will be returned to Russia.

Aftenposten reports that no persons will be sent to Russia on Friday because there are no busses available, but Tor Espen Haga says people will be sent across the border on Saturday.

To NTB, Tor Espen Haga underlines that the 82 persons are not arrested, just detained. That means they are free to move around inside the Reception Centre, but not allowed to walk outside the fences.

The Norwegian Ombudsmann for Children, Anne Lindboe, says families with children should not be returned back to Russia as the situation is now.

“There are too many serious concerns, including from the UN High Commissioner on Refugees, regarding the Russian system for dealing with asylum and the conditions for children applying for asylum in Russia,» Linboe told NTB on Thursday.

According to a report made by the Norwegian Organisation for Asylum Seekers in 2014, international human rights law does not prohibit detention of children, but it demands that it be restored to only as a last resort.

The Convention on the Rights of the Child says “no child shall be deprived of his or her liberty unlawfully or arbitrarily. The arrest, detention or imprisonment of a child shall be in conformity with the law and shall be used only as a measure of last resort and for the shortest appropriate period of time.”