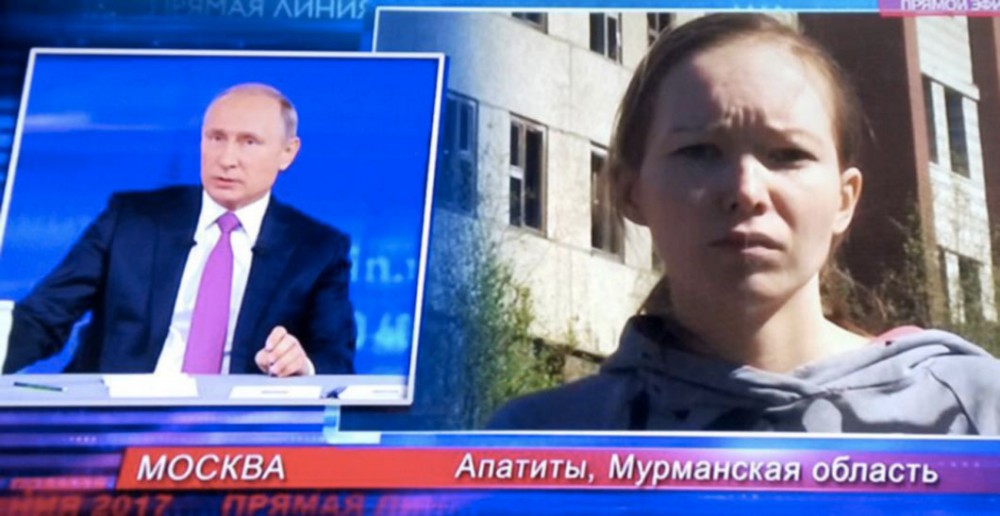 Screenshot of video from Novaya Gazeta

In the Murmansk region, more and more people are dying of cancer. The case of Daria Starikova has not changed anything
By

Darya Starikova, the 25-year-old cancer patient from the city of Apatity in the Murmansk region, died in Moscow on May 21.  Starikova had become somewhat famous for her online conversation with Vladamir Putin last year when she asked the Russian president why her doctors had treated her for osteochondrosis and not for cancer, which was diagnosed only at the 4th stage.

To be fair, Dasha’s appearance on TV screens was, let’s say, not a mere accident but more an act in a political game, in which a dying person was used. Starikova had been given a diagnosis 4 years earlier, and she had never been refused help, she had simply ignored the situation until it became an emergency. And by that time, there was little that could be done.

It’s not necessary here to dance on a fresh grave. This will only make her story worse. Sometimes doctors can do the impossible and the country’s best doctors fought for a year to do something for Dasha. But in the end, they could not save her and now, her seven-year-old daughter lives with her aunt and the state has granted the girl a 12.5 thousand rubles subsistence pension to live on every month.

So last year’s TV show about Starikova did not become a sensation. Everyone who have faced such a diagnosis, not only in Murmansk but practically everywhere, knows about the depressing state of oncology care. But instead of a careful investigation and real attempts to change the situation, there immediately started an instructive  punishment of Yuri Shirev, the head physician of the Kirov Central Regional Hospital, who wrote a statement of resignation at his own request. Kirovsk and Apatity are twin cities about 15 km apart and the CRH is in Kirovsk. But the doctor’s patients made a campaign defending him and his resignation was withdrawn.

The Investigative Committee has informed the Novaya Gazeta that a criminal “negligence” case, started immediately after the TV show, is still being looked into.  But there are no real plans to finish construction on the new hospital in Apatity, which Putin promised on the air. And thank God if the proposed multibillion ruble budget turns out to be true. If we are really talking about helping cancer patients, should such an unexpected windfall end up in the hands of Murmansk medicine, it would be much more important to invest in the reconstruction of the regional oncological clinic. This year, against the backdrop of the scandal, one of its buildings was repaired but the radiology equipment there is still from the 1980s and regularly breaks down.

In a report to the regional Duma, Governor Marina Kovtun recently announced a sharp 7.3% decline in mortality from neoplasms in 2017. However, a look at the Murmanskstat data shows that cancer has already taken 236 lives in the early part of 2018, 10% more people than the 216 who passed during the same period last year.

And these mortality rates do not include deaths outside the region by the way, and more and more northerners who have been diagnosed with advanced cancer travel out of the region to look for hope in treatment in large medical centers.

With reference to sources in the regional Ministry of Health, the FlashNord news agency reports about 150 patients who have died as a result of misdiagnosis. According to the agency, the cancer has been «overlooked» and not detected until the 4th stage. The Ministry has not commented on this information. However, several similar stories have resonated this spring. For example, the regional Health Ministry is checking into allegations of potential improper treatment of Nadezhda Vorobyeva, whose cancer was also diagnosed only at a late stage. Previously, the woman had been treated for migraines, osteochondrosis and anxiety.

A few days ago, a criminal case was opened in connection with the mistreatment of Sergei Pavlov, a citizen of Murmansk, who had been «treated» with vitamins while the cancer inside him remained unnoticed.

And Severomorsk’s Alexander Smirnov was being treated for an ulcer until an ultrasound, made under his own initiative, showed a malignant tumour. The tumour was by that time inoperable. There were metastases in his liver and abdominal cavity. According to Smirnov, the lack of diagnosis was the fault of insurers refusing cover ultrasounds and the polyclinics refusal to pay for such “superfluous” procedures.  And this is true. In the Murmansk region, contrary to federal legislation, the Medical Insurance Territorial Fund dictates to doctors how to treat people, what people can be treated and how many resources can be used. And getting back money due for already treated patients is only  possible through a court.

The regional government promises to invest 238 million rubles in the oncology dispensary by the end of next year. But considering the depressing state of affairs, this will probably not solve all of the institution’s problems.