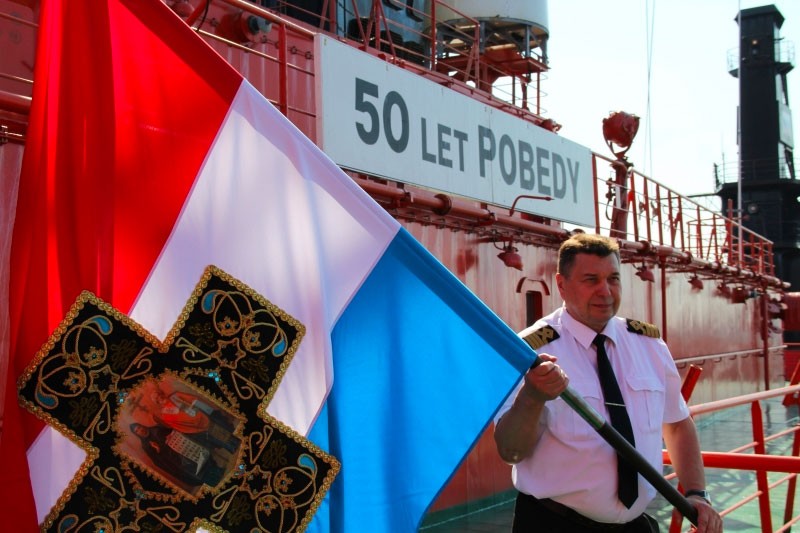 It is a sign of our joint spirituality and patriotism, members of a Russian expedition say as they set out on a tour from the North Pole to Montenegro.
By

It is Russia’s most powerful nuclear icebreaker, the «50 Let Pobedy», that is carrying the group of pan-slavic enthusiasts to the northernmost tip of the globe. On the 20th July, the ship set out from Murmansk on what nuclear power company Rosatomflot calls a «memorial voyage».

On board is a copy of a flag given by citizens of Russian town Samara to Bulgarian militiamen in year 1877.

The 1,85x1,90 meter big banner, originally made in silk, is colored red, white and blue and has a centerpiece showing Saints Cyril and Method engulfed in a golden cross. It was originally made by Russian nuns from Samara and handed over to the Bulgarian soldiers in connection with the Russian-Turkish war of 1877-1878.

The war was of paramount importance for the subsequent independence of Bulgaria and the original Samara Flag is still kept in the Bulgarian National Museum of Military History.

«This is a symbol of unity of the Slavic peoples,» tour organizer Marina Chistonogova said as she handed the flag over to nuclear icebreaker captain Oleg Shchapin. The expedition aims at promoting «friendly and cultural connections» and strengthen the «unity of spiritual and patriotic forces in Russian regions and slavic states,» she underlined.

Chistonogova, who is also secretary in the Murmansk Union of Writers, makes clear that the expedition is organized in connection with the 140-years anniversary of Russia’s liberation of Bulgaria. «We are forever connected by bonds of friendship,» she underlines.

The expedition is launched at the North Pole. But the expedition members have more than the Arctic and Bulgaria on the agenda. In the course of August and early September the group will visit also Slovakia, Serbia and ultimately end up in Montenegro, Rosatomflot informs.

The voyage of the holy Samara Flag to the North Pole is far from the first Russian symbolic act of patriotism in the north. Over the last years, the North Pole and the Arctic has increasingly gained a key role in the build-up of Russian patriotism, and a big number of undertakings have been made, many organized in cooperation with the Ministry of Defence, the Armed Forces, the Orthodox Church and the Russian Geographical Society.