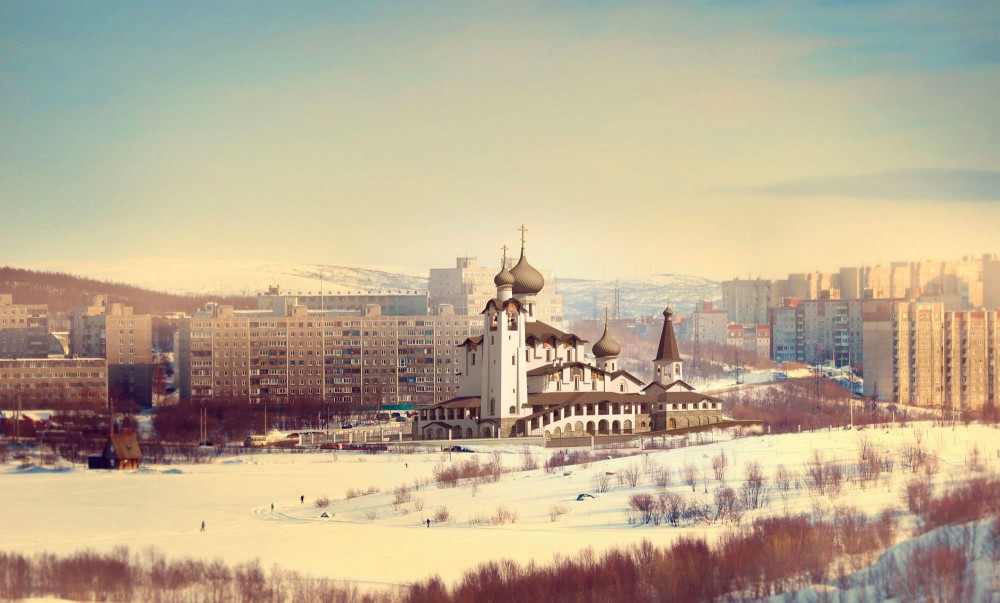 The projected cathedral by the Semyonovskoye Lake in Murmansk. Illustration: tovrest.ru

Murmansk Governor Marina Kovtun might have promised Patriarch Kirill to build a cathedral on spot of the central city sport stadium.

Comrades, if you have already donated money to the building of a new cathedral Semenovskoye Lake, you should start saving now for your next installment because Kirill, Patriarch of Moscow and all Rus“ no longer  likes the proposed site. Now the head of the Russian Orthodox Church demands that the church house be erected in a completely different place, specifically, opposite the Yellow House, the government building on Lenin Prospect.

True, there is currently a sport stadium there, but these are trifles. Can we remember how the Bolsheviks built pools and things like this on the sites of churches? This is kind of the same thing but just the opposite.

Let’s go back to 2011. The church created a charitable foundation in Murmansk to raise money for the construction of a cathedral. This is a rather pompous 1.5 hectare construction project and a plot of a land has been allocated and survey work has taken place.

The planned project is gigantic, covering more than 3000 square meters with a fifty meter high cathedral and of course, the traditional wooden covered balconies and galleries which should surround the building on three sides.

The price of construction, according to the director of the foundation Mr. Grigoriev, is about one billion rubles (€13 million). Over the years, they have collected about 70 million (€900 thousand) with every fourth ruble of the donations going towards the director of the fund’s salary.

On August 19, 2016, Patriarch Kirill with great pomp and with Governor Kovtun in attendance, officially placed a stone plaque dedicating the Spaso-Preobrazhensky Morskoi cathedral near the existing church on site.

Since then though, nothing has really happened around the site but for planning the construction fence and putting up the memorial plaque.

But then in June 2018, an amazing document appeared in Murmansk City Hall and in the Regional Trade Union Council’s offices signed respectfully by Simon, Metropolitan of Murmansk and Monchegorsk. In the letter, the Metropolitan demands a completely different territory be allocated for the construction of the cathedral, namely where Central Stadium currently stands.

Moreover, the Metropolitan pointed out that Govenor Kovtun had personally offered the stadium to Patriarch Kirill as a possible site for the cathedral on August 19, 2016, that very same day the press gathered to film Patriarch Kirill blessing the memorial plaque. In support of his requirement, Bishop Simon referred to her presence at the televised «blessing» as proof of Kovtun’s cooperation.

At this point, it is worthwhile to pay tribute to the governor’s diplomacy. At that moment in 2016, there was much talk about Kovtun’s resignation due to the plethora of corruption scandals surrounding her governorship. But at the dedication, her sense of courtesy allowed her to accept the support of the influential church official and according to RBC, it is quite possible that the Patriarch’s intercession on her behalf is the secret of Kovtun’s irremovability.

This by the way was not the first time Kovtun received a blessing from Kirill. The Patriarch had also given his blessing to her inauguration. Certainly, Patriarch Kirill used the moment to show the church’s loyalty to Mrs. Kovtun who, though an atheist by her own admission, commented later that the blessing had touched her soul.

The Mayor’s Office however responded with surprise. According to the city, it would be impossible to give the church the stadium land until at least 2053. Tsentralnyi Profsoyuz Stadium LLC, a subsidiary of the Regional Trade Union Committee, holds the lease to the land and the Civil Code does not allow the land to be taken away. The trade union members turned down the Metropolitan’s request, though doing so with Jesuit courtesy by wishing the Metropolitan the Lord’s mercy at the end of their letter.

On July 5, a bewildered Bishop Simon turned to the previously blessed Kovtun. Attaching the correspondence with the trade unionists to his memo, he suggested that she personally explain the situation to the Patriarch. The letter clearly implied that, as she was responsible for the mess, she was the one to clean it up.

Kovtun answered the Bishop’s letter saying that despite great pain in her soul, there had been a mistake or some misunderstanding on the church’s side. The deal only included the currently allocated church property and then added that, as a representative of the secular authorities, she had no right to interfere in church matters. She concluded by expressing her deep respect and wishing him good health and success in his service to the church.

On November 19th,  Patriarch Kirill was indignant and sent a resolution to Metropolitan Simon. This memo prohibits anyone calling the Spaso-Preobrazhensky Morskoi cathedral, for which Mr. Grigoriev with the active participation of various kinds of government bodies have been rounding up their billion rubles, a megaproject. The resolution also requires the cathedral to be built on the site of the Central Stadium. And the document concludes by advising that a sketch of the cathedral on the proposed stadium site must be submitted before January 2019.

Here by the way, dear readers, you can help the Metropolitan. The deadlines are clear but currently, there is no project to submit. So, perhaps someone who is experienced in art and architecture might help by sending along a sketch they can use in the comment section below.

So, this is our current farce. In the aftermath of the debacle however, Kovtun is still in the black. The Patriarch’s intercession saved her chair for the time being though Metropolitan Simon might lose his because of disobedience to the head of the church.

The trade unions are not at all at risk as any demolition of the stadium in favor of the Russian Orthodox Church is hardly possible by force.

Mr. Grigoriev is also not so bad off because even more money is being collected for the new church project despite its current implausibility. This new collection is for the construction of an ordinary church, albeit a gigantic one, to be built on the stadium site. However, it seems that the old project is still collecting money on the foundation’s website as well. The old project is still called the “Spaso-Preobrazhensky Morskoi Cathedral” and despite the fact that the project has been for all intents and purposes closed by Patriarch Kirill’s orders, contributions for the new project (and the old one) are being accepted.

One wonders however if there is a judicial prospect for the return of the previously collected voluntary donations. The money donated to the Spaso-Preobrazhensky Morskoi cathedral project was specifically for the land on Geroyev Severomortsev Prospect and not on the stadium site on Prospekt Lenina. The status is not the same. Something has definitely gone wrong and it will be interesting to see how many of the benefactors get upset or feel deceived.

Another question is who among the participants in this farce might be most tempted into intrigue. Only one man is vindictive and influential here: Vladimir Mikhailovich Gundyayev, aka Patriarch Kirill of Moscow. And, if this powerful “servant of God” comes to understand that he has been fooled, his blessings for both the construction at Geroyev Severomortsev Prospect and those for the self-admitted atheist in the congregation might be lost.