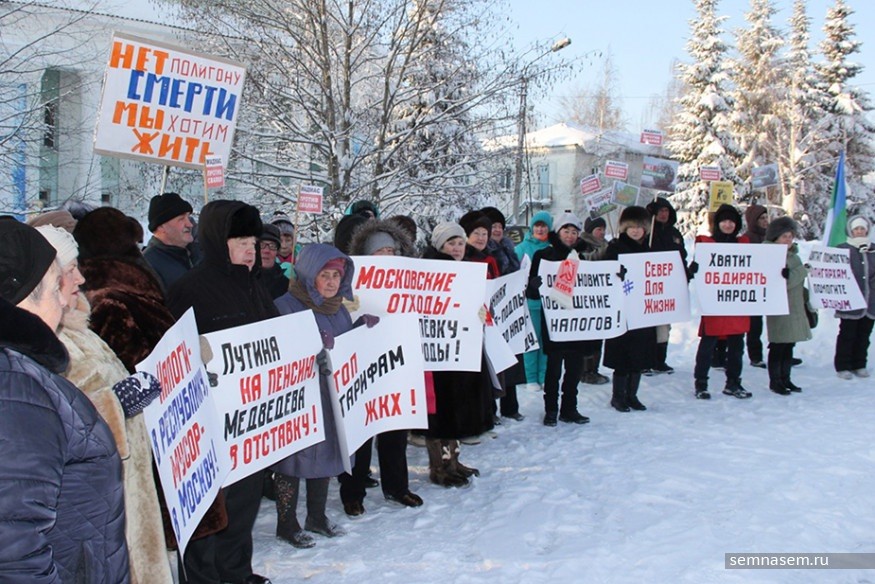 On February 3, people came out to protest in 44 Russian cities of from Kazan to Chelyabinsk and from St. Petersburg to Krasnoyarsk in support of local residents who have learned much about street politics. The epicenter of the protests was the small village of Shies on the border of the Komi and Arkhangelsk regions where they have been building a landfill for the disposal of Moscow region’s waste for almost a year.

After “garbage” protests in the Moscow region, it was decided to export the capital’s waste to 11 landfills in the North-West of the country. The first was Shies. A huge waste disposal compound has been under construction there for more than half a year despite never having filed any permit documents. And since the plan’s discovery, the village has turned from an unknown point on the map into the capital of the resistance.

The protestors are fighting against both the importation of garbage to the North and against the “garbage reform” act that was established to facilitate it. And how the authorities have handled the whole affair is to blame for the rise in tensions.

According to the act, each region should have their own waste management operator. This change would require the construction of 11 new landfills. Last year, regional Governor Igor Orlov asked for a garbage referendum and indicated that the «EcoCenter» company was going to be the local operator.  EcoCenter is a member of the «Clean City» holding company group, which has been mentioned in a series of scandals in the Volgograd region, where certain public officials were accused of taking bribes when choosing the regional operator for their waste management operation. The governor called the plan in Arkhangelsk a great opportunity to make some money for the region and the region’s agreement to accept Moscow’s garbage was called a “concession” for  creating a new waste management system in the region. And locals were told not to worry as all Eco-techno parks are built exclusively at the investor’s expense.

But then someone noticed that construction had already started and the protests began.

Public hearings regarding the act were held in the village of Urdom at a club. The vote was a farce with the region bringing in Uzbeki students, who later apologized for being pawns over the social networks, to swell the yes vote.  Local people managed to get the vote nullified due to the obvious voter fraud. Someone shot a video of Arkhangelsk’s Ministry of Nature Ivan Popov’s smartphone. At that moment, Popov was corresponding with the deputy governor of the regional government, Yevgeny Fomenko about how many “extras” he had managed to sneak in. The dialogue in the screenshot of the video was perfectly readable and ended up on VK.

But the work continued anyway despite no local agreement,  “official” documentation or permits.

And if this garbage situation couldn’t get any worse, local garbage has stopped being collected. The new garbage law came into effect on January 1. Every Russian citizen in the region has had 150 rubles (about 2 euro) per month added to their housing bill for the new locally organized system. But as the facility has not yet been built, there is no garbage service. They say that the construction is continuing at an accelerated pace. They say that they didn’t even stop for New Years.

Everything here reeks of a national-scale scam.

So environmentalists announced a day of protest on February 3rd and despite the cold weather, it was minus 38 in Krasnoyarsk for example, people entered public squares by the thousands with the biggest gatherings in the capital of the Arkhangelsk region. The activities were laconically monitored by city authorities and the Archangelsk residents first had to clear an area of knee-deep snow on the left bank of the Dvina for the gathering. The spot humorously enough was well outside the city center and was the only place the authorities would grant them. But gather they did and, according to the organizers, 5,000 people rallied. There were also 9,000 in Severodvinsk, 2,000 in Kargopol and Kotlas, and even hundreds showed up in the small towns and villages, some following the example of the Parisians were wearing yellow vests.

Residents of Shies are on a 24-hour voluntary watch at the site of the landfill facility. It is a symbolic picket. People have set up a trailer there and they continuously record what is happening. Such a partisan landing is clearly an overwhelming experience for the Karelian “Sun Partisans”, retirees who have also witnessed several months of protests defending their forest from logging.

But there is a war and both sides are fighting. They are actively trying to discredit the protest on social networks. They call the leaders of the movement «Navalny agents»  and say that the protests are just the manipulations of subversive foreign organizations. They write that there are no activists in Shies, only prostitutes.

But the truth is that ordinary villagers are protesting the transformation of Pomerania into a trash heap. They just do not want 80 wagons of trash packed in polyethylene being deposited near their houses every day.

And Shies is not the only place where this garbage deal is under fire. The New Times, recently reported on an undocumented loading cluster being built in Lyubertsy near Moscow. This would be the starting point to send Moscow’s garbage to Shies. Residents of the neighboring Lyubertsy districts are extremely unhappy about heavy trucks bringing garbage to be sorted under their windows every day.

Suddenly, Muscovites and residents of a tiny village «somewhere in the North» are facing a common problem and are ready to fight together against garbage expansion. Cries of “The loyalty of the regional authorities is only to the trash lobby” stirs the protest and gives it a political tone. In Arkhangelsk, protesters are again demanding the resignation of Governor Orlov. Ironically, one of the speakers, recalled Orlov quoting Yoseph Brodski in his speech at the opening of the country’s first poetry museum:

“When you read the poetry of the dissident Brodsky, we all thought you were an intelligent man. Why did you have to become a Moscow shit collector?”

According to surveys, the number of Arkhangelsk townspeople who are ready to participate in protest rallies has increased from 23 to 83% since the last rally.