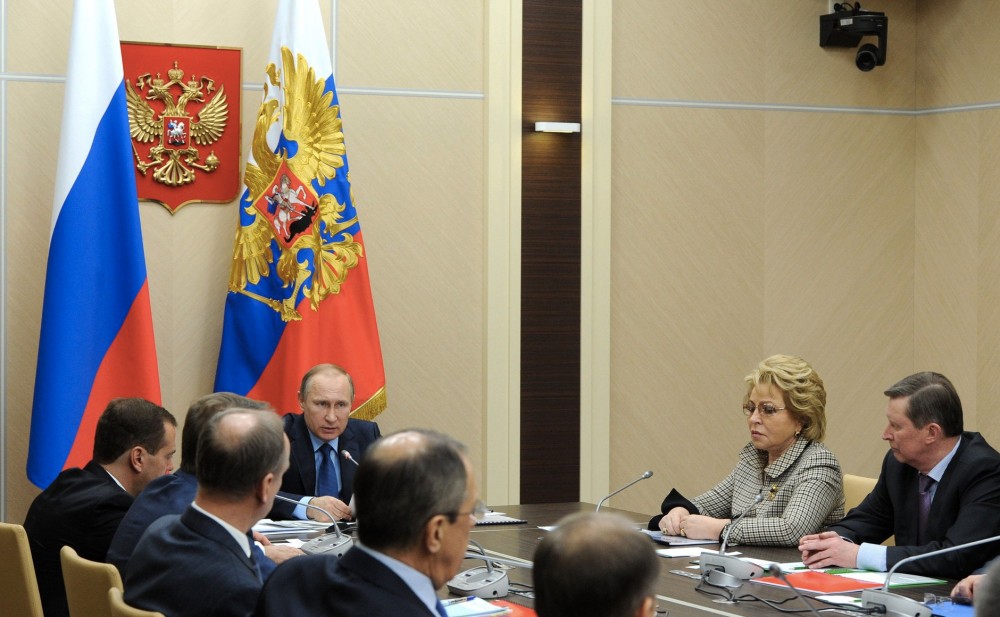 Migration on the agenda of the Russian National Security Council. Photo: Kremlin.ru

Every loophole must be closed off, Putin says to his top national security brass.
By

Immigrants face a tougher life in Russia as the country’s National Security Council adopts a string of restrictive counter-migration measures. In a meeting on Thursday, President Vladimir Putin requested leaders of his top law-enforcement authorities to «strengthen operational and preventive activities in fighting crime elements among immigrants».

He also underlined that control measures on the state border will be enhanced.

«We will step up protection of the state border in areas where there is a danger migrant influx», Putin said, a transcript from the meeting reads.

«All possible «windows», all loopholes must be effectively sealed off», he stressed.

According to the president, lessons must be learnt from the refugee and migrant crisis in Europe. The refugee flow to Europe from the Middle East, North Africa, Afghanistan and other regions has resulted in a hike in radicalism and terrorism recruitment, he argues.

«We need to make thorough analysis of this situation […] and conduct subsequent policy adjustments with regard to existing and potential threats».

A total of 30 people attended the meeting, among them top government ministers, leaders of the presidential administration, as well as the FSB and the Foreign Intelligence Service.

According to newspaper Vedomosti, among upcoming government measures might be the abolishment of the country’s Federal Migration Service and transfer of its responsibilities to the FSB and the Interior Ministry.

Thursday’s national security meeting comes after Putin in a collegium of the FSB on 29th February stated that «monitoring of the refugee flows coming into Russia or transiting onwards to European countries would be tightened».

That appears to be what put a stop to the migration flows from Murmansk Oblast to northern Finland.

«Finland is very content that you have taken our requests into consideration», Niinistö said.

As previously reported, the Russian and Finnish presidents agreed to introduce «temporary limitations» on the border-crossing points of Salla and Lotta, the two northernmost checkpoints between the countries.

Those restrictions include the closure of the border for all third-country citizens for the next six months, including for nationals from other EU countries.