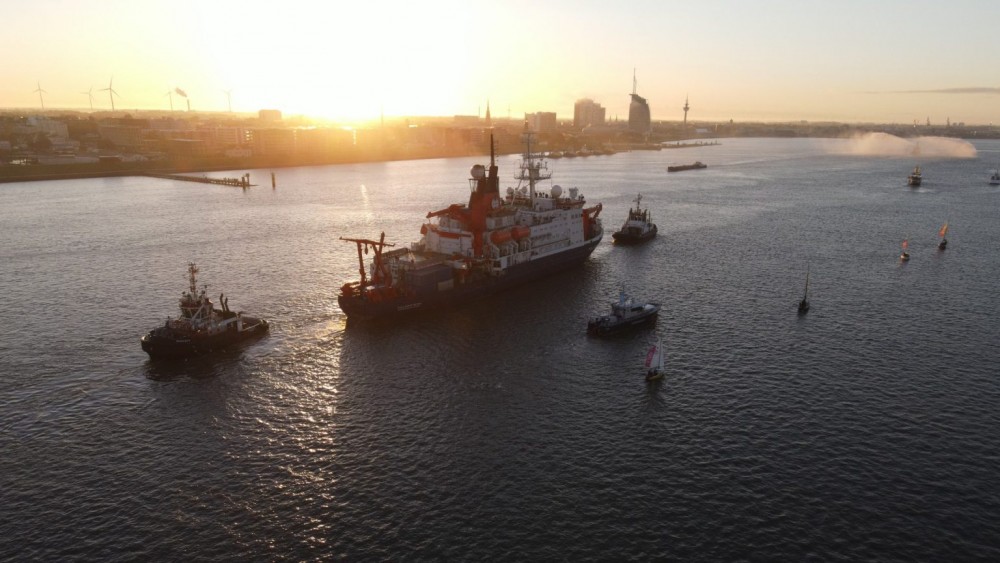 The German research icebreaker Polarstern returns to its homeport in Bremerhaven on Monday after a 389-day Arctic science expedition. Photo: Joachim Hofmann/Alfred-Wegener-Institut

A year-long international Arctic science expedition came to an end on Monday as the German research icebreaker Polarstern returned to its homeport in Bremerhaven.

The Multidisciplinary drifting Observatory for the Study of Arctic Climate (MOSAiC) expedition was launched on September 20, 2019 from the Arctic Norwegian city of Tromso. It travelled north from that point to the Central Arctic Ocean to allow itself to become trapped in the ice, and then drift with ice for the next year in order to better understand how climate change was impacting the Arctic.

For the duration of the research the route and speed of the trip was determined by the ice drift, wind and ocean current.

The expedition, led by the Alfred Wegener Institute, Helmholtz Centre for Polar and Marine Research (AWI) in Germany, lasted 389 days in total.

“Today the expedition comes to a successful end, and we have a much clearer grasp of the interplay between the ice, ocean and atmosphere than ever before,” said Antje Boetius, the director of the Alfred Wegener Institute, Helmholtz Centre for Polar and Marine Research (AWI), in a news release on Monday.

“The unparalleled commitment of experts from around the globe is what allowed us to make this scientific breakthrough in Arctic research. They have brought back countless samples and comprehensive data from their one-year-long drift. This unprecedented dataset is a gift for all humankind. Now it’s our responsibility to use the new knowledge gleaned to make the right choices – for the future of the Arctic, and with it, the future of our planet.”

International teams of experts have been rotating on an off the vessel throughout the research period. More than 442 researchers from some 80 different institutions in 20 different countries, including Canada, worked on the Polarstern at some point during the expedition.

The final cost of the expedition was around 150 million euros ($232 million CDN). Germany supplied roughly two-thirds of the budget.

“Climate change is the greatest challenge facing humanity,” said Anja Karliczek, Germany’s Federal Minister of Research, on Monday. “A challenge that we can only overcome together – by transcending the borders of disciplines and nations alike. The international MOSAiC mission, which brought together researchers from 20 nations, shows that, despite all the setbacks, at the international level there is a willingness to rise to this challenge.

“Throughout their long months in the Arctic ice, the experts involved retrieved a unique wealth of data, which generations to come will profit from: gathered at the epicentre of climate change, it will help to fill critical gaps in our understanding of the region, allowing us to re-assess and more accurately evaluate our current climate models.

“It is only by understanding how the climate is changing in the Arctic that we will be able to take appropriate preventive measures against climate impacts and effectively combat climate change here in Germany. By bearing over half of the expedition’s total cost, Germany has assumed a leading role. Accordingly, MOSAiC continues a long-standing tradition of German support for research into the Arctic and climate change. Our goal is to preserve the world as we know it today for future generations. And that’s why we’re taking concrete action – both nationally and internationally. The MOSAiC mission also represents this conviction.”

“We’ve seen how the Arctic ice is dying”

Seeing the effects of climate change first hand were an important wake-up call said those who participated in MOSAiC.

In August, shrinking ice conditions even allowed the expedition to reach the North Pole.

“We’ve seen how the Arctic ice is dying,” said Markus Rex, the expedition leader and head of the MOSAiC project, at the Alfred Wegener Institute, Helmholtz Centre for Polar and Marine Research.

“In the summer, even at the North Pole, it was characterized by extensive melting and erosion. If we don’t make immediate and sweeping efforts to combat climate warming, we’ll soon see ice-free Arctic summers, which will have incalculable repercussions for our own weather and climate.

“Though today the Central Arctic remains a fascinating, frozen landscape in winter, the ice is only half as thick as it was 40 years ago, and the winter temperatures we encountered were nearly always ten degrees warmer than what Fridtjof Nansen experienced on his ground-breaking Arctic expedition over 125 years ago.”

The MOSAiC project was inspired by Norwegian polar researcher Fridtjof Nansen’s Fram expedition which took place from 1893-1896, when he used a wooden ship to freeze in the pack ice and attempted (unsuccessfully) to drift to the North Pole.