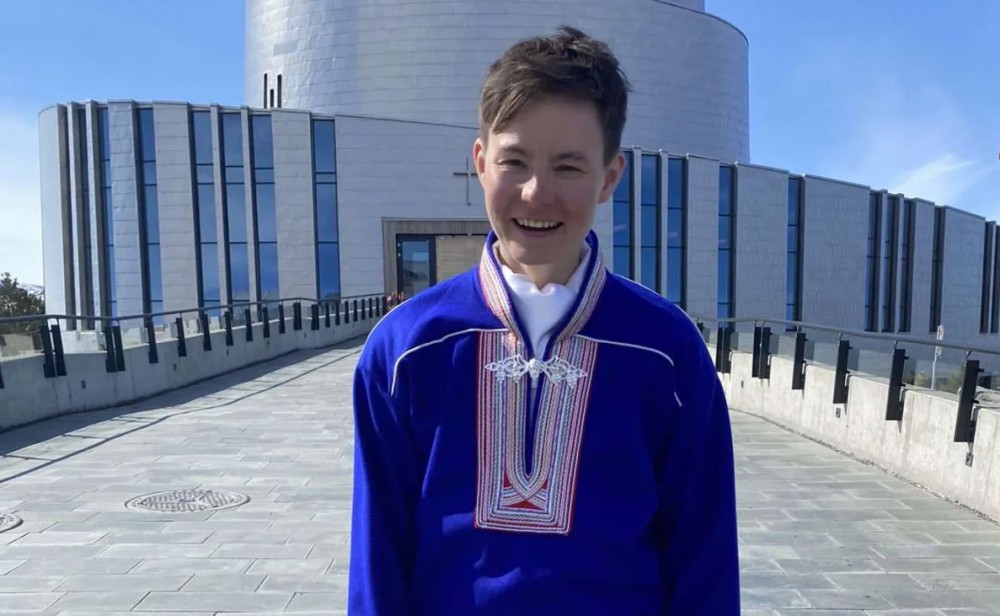 Anne Risten Sara from Kautokeino, Norway, did not feel comfortable in a woman’s Sámi clothing. After finding a tunic-like version of a man’s attire, Sara can finally wear the Sámi dress with joy and pride. Photograph: Renate Mikkelsen

Sámi handicraft is often strongly gender-divided. For Anne Risten Sara, this has been a source of problems, as Sara feels neither woman nor man. Sara hopes that one day someone will sew a Sámi attire that they can wear and feel comfortable in. Discussion on the theme is only emerging in the Sámi community.

«This is not me. This dress belongs to someone else.»

But identifying neither as woman nor as man, Anne Risten Sara never felt that this attire was their own. Many sectors of Sámi crafts are divided into two groups characterising two genders, but the most painful experiences caused by this division are connected with the Sámi attire.

Sámi handicraft, duodji, is an important cultural heritage for the Sámi. Women and men have their own designs of the dress, hat and shoelaces. The silver brooch is mostly worn by women, while men decorate the front of their attire with clasps.

Many Sámi feel that the traditional clothing of their home region is the most beautiful garment that they have. However, this was never the case for Sara. Two years ago Sara decided that it was time to refuse to wear a Sámi attire that did not feel right.

«I didn’t even want to go to weddings or confirmation ceremonies because I didn’t want to wear the Sámi clothing,» Sara recalls.

In traditional Sámi crafts, each area has its own design that the Sámi treasure. There are indeed many unwritten rules that apply to the Sámi attire.

But with time, the designs have also changed, and today people also want to express their Sámi character in new ways. There are also new variations of the Sámi attire, and the dresses reflect both the wearer’s personality and fashion trends.

Therefore, Anne Risten Sara thought that it would be easy to find a dressmaker who would sew a dress that they could proudly wear. But it was not so simple.

«I’ve asked many craftmakers to sew a Sámi dress for me, but none of them have dared or wanted,» Sara explains.

Sara still waits for someone to sew a dress that would fit and feel comfortable for them.

«It’s hard to understand. We now have shirts, hooded jackets and frocks that are based on the design of the Sámi dress, so why this? Why is it so difficult to sew a Sámi dress for me?»

Sara also likes the fact that the design is not too similar to that of men’s Sámi attire. Now Sara also wears another tunic-like shirt that they got as a present.

«Finally I can also say that the Sámi dress is the most beautiful garment I have,» Sara says, smiling.

Anne Risten Sara hopes to pave the way for others who struggle with similar issues. Sara knows how difficult it is for them.

«I hope I can be of help to someone, even just for one or two persons. I want people to realise that the world is not all black-and-white. It has many colours,» Sara says.

The Sámi traditional dresses are a reflection of their time. Nevertheless, certain rules and customs die hard. The Sámi attire is divided into men’s and women’s dresses and accessories, which is why it has been a challenge for Anne Risten Sara to find a dressmaker for a suitable dress.

Sámi artist Sunna Valkeapää believes that the binary division into men and women mainly emerged in the Sámi community due to assimilation and Christianity.

«I think that Christianity and the assimilation forced on us Sámi brought us the gender groups that only consist of woman and man, just two figures,» Valkeapää reflects.

Valkeapää’s view is based on old Sámi stories and mythology. Old narratives tell about Father Sun and Mother Earth, and in addition harmony is created by the Moon, which reflects them both.

«The moon has reflected sunlight, maintaining harmony on the earth. I’d say that the moon has been the nonbinary party and an essential part of this whole, and without it, the world would not function as it should,» Sunna Valkeapää reflects.

Discussion on the attire of LGBT Sámi

A Sámi artisan Anna-Stina Svakko from Sweden explains that the clothing traditions that were born centuries ago served the ways of life and the needs of their time. Therefore, it may be so difficult to change our way of thinking. Svakko stresses that to do so we need co-operation between Sámi craftmakers and gender minorities.

«I feel that we would need, for example, a workshop to discuss the theme among us craftmakers. LGBT people could also take up the issue so that there would be a concrete discussion,» Svakko suggests.

She feels that craftmakers need to be pathfinders in their work: they need to help a person who orders a dress.

Inka Hermansen Hetta, the Director of the Sámi crafts institute Duodjeinstituhtta in Kautokeino, Norway, feels that the areas and villages where the wearer comes from play a more important role in the Sámi attire than the gender of the wearer.

«The dressmaker needs to know the characteristics of the dress designs of the various areas when sewing a Sámi dress. The design of the dress should not be changed too much, as the most important thing is to recognise the home region of the wearer,» Hermansen Hetta emphasises.

Craftmaker Lise Tapio Pittja from Jokkmokk, Sweden, also feels that it is important to be able to see the wearer’s home region from the dress.

Pittja feels that the best thing would be if the nonbinary people themselves decided what a nonbinary dress would look like.

«If everyone just creates their own design, we will not get a design that is generally shared by the Sámi,» Pittja says.

Sámi artist Sunna Valkeapää recalls their grandfather telling how Sámi dresses used to be very similar; traditionally, there were no great differences between the attires worn by men and women. This tradition is still manifest in the reindeer fur coat used in winter: they have not been divided on the basis of gender.

For Valkeapää, the Sámi attire symbolises the wearer’s personality to a great extent.

«I’ve understood and I believe that the design of the dress tells more about the presentation and the energy of the wearer and not so much about what the wearers have between their legs. For me, the standard that we should show our gender through our clothes represents a colonialist way of thinking,» Valkeapää says.

Valkeapää is of the opinion that it is extremely important to continue the discourse on the Sámi attire, and feels that the dress should not necessarily be tied to the wearer’s gender.

«People have the right be exactly what they are. We nonbinary people must be included in the Sámi community, in the same way as the ancient narratives had the sun and the earth, but life was not possible without the moon,» Sunna Valkeapää says.