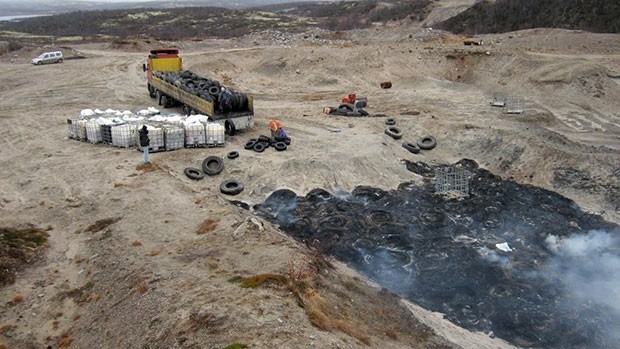 Flares light up the Arctic sky over Kola Peninsula as aquaculture farmers put fire to rotten salmon. This week, one of the key companies said enough is enough and declared itself bankrupt.

Rottening fish is now sent to several destinations in the Kola Peninsula, among them Nikel, Teriberka, Murmashi and Molochny. There, the smelly loads are mixed with rubber tyres and put on fire.

Authorities in Murmansk now say the destruction process of the perverted salmon will be completed by early December. In Nikel, the Russian border town, the fish burning was completed already on 29 October, a press release reads.

Meanwhile, one of the region’s major aquaculture companies this week informed that it going bankrupt. The company Russian Salmon has over several years invested major sums in its facilities in the Pechenga Bay and was presented one of the region’s cornerstones in aquaculture development. The Russian Salmon, which is part of the Baltiisky Bereg company, itself requested bankruptcy, TASS informs.

The other major regional salmon farm company, the Russian Aquaculture, is facing a similarly unclear fate as it experience massive fish death in its facilities. More than 2000 tons of dead salmon has been found dumped and rottening in several sites in the region.

News reporter Bloger51 has revealed major volumes of the fish outside Molochny, a local village.

According to Bloger51, the aquaculture farmers might have kept more than twice as many fish as allowed for in their cage nets.

The company Russian Aquaculture operates two fish farms in the region and has licenses for another 12.