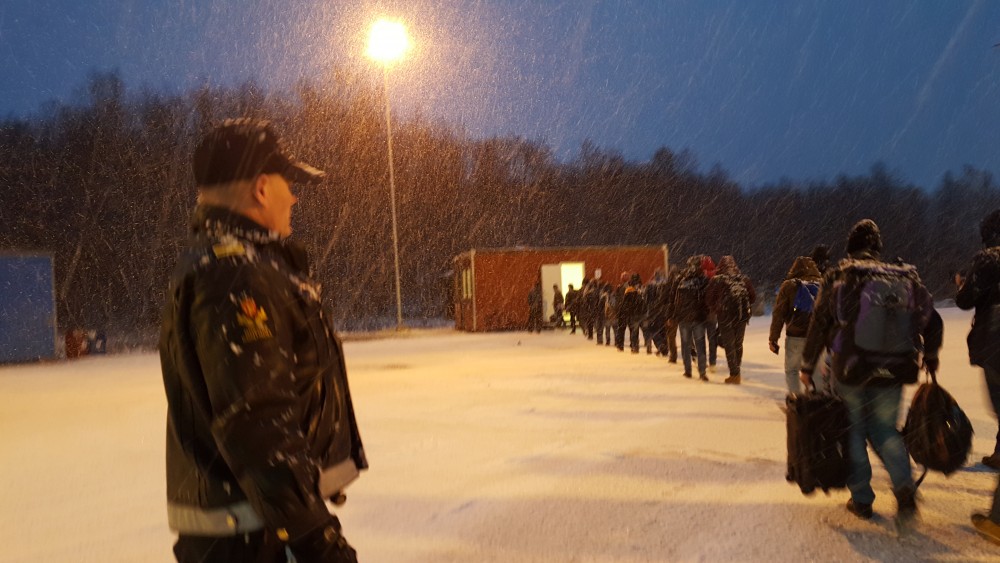 Afghan asylum-seekers line up for registration at Storskog checkpoint after coming the Arctic Route via Murmansk to Norway. Photo: Thomas Nilsen

Norway sends a clear message to Afghan migrants in Russia. Crossing the border at Storskog can give a one-way ticket to Kabul.
Text:

Last week, the Norwegian Directorate of Immigration sent a tweet warning that single Afghan men that have had legal papers to stay in Russia, risk being sent back to Afghanistan if seeking asylum in Norway.

Over the last week, the vast majority of asylum-seekers bicycling over the border from Russia’s Kola Peninsula to Storskog checkpoint near Kirkenes are Afghans.

So far, none of them have been sent back to Afghanistan.

Returning to Russia became more difficult as a growing number of the migrants coming from Moscow via Murmansk to Norway got their resident permits for Russia cancelled, many even expelled.

In an interview with VG on Saturday, the Norwegian Prime Minister Erna Solberg a quick processing of cases with a direct return to Kabul would send a clear signal.

“It will send a clear signal if these cases are handled quick so that those who should not stay will be returned. For instance, we do return single Afghan men by sending them to Kabul,” Solberg says.

Norway believes the inflow of Afghans coming the Arctic Route via Murmansk will stop when they understand a return to Russia is not the option, but instead a one-way ticket from Kirkenes or a larger airport in northern Norway directly to Kabul.

“This signal is important to send,”Prime Minister Erna Solberg says to VG.

On Friday, the migrant crisis at Storskog border checkpoint was discussed in the Parliament. It was then decided that closing the border to Russia is not the answer to the current situation.

102 asylum-seekers came to Storskog on Friday, less than the previous days of the week. The peak record was on Tuesday, when 196 came.