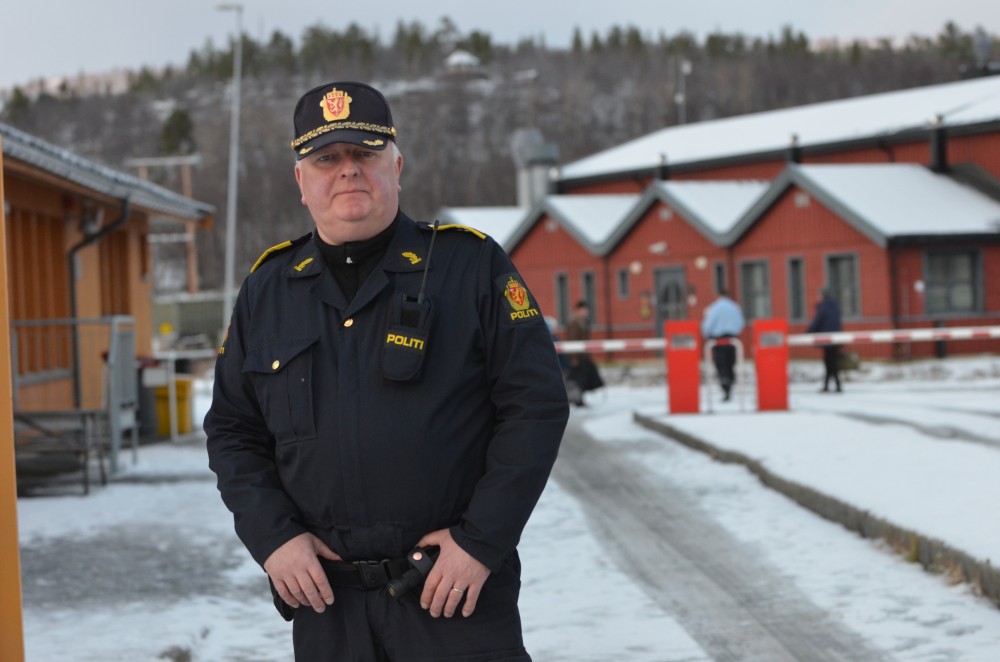 ”This border-crossing point is not built for this kind of situations", Police Officer Jørgen Granberg says. A big share of the migrants now crossing Norway’s Arctic border come from Afghanistan and have few chances of getting residency in the country.
Text:

As Arctic winds blow the first snow through the streets of Kirkenes, the Norwegian border town, a group of more than 30 people make their way to Storskog, Norway’s only border crossing point with Russia. All with bicycles, but many still walking, unsure about the slippery conditions. Most are men, but also families with kids are part of the group. With small suitcases and backpacks the group lines up in front of the checkpoint building whereupon they are escorted by Norwegian police to a nearby transit facility.

The influx of migrants across Norway’s Arctic border with Russia has taken the Norwegian border town by full surprise. The number of refugees at the border only this weekend reached 239 individuals, the biggest number so far. Over the last seven days, the number exceeds 785.

”This border-crossing point is not built for this kind of situations. Our border police officers are now overloaded with work connected with the migrants, police Jørgen Granberg, says to the Independent Barents Observer. ”Their original work tasks have had to give way to the migrant operations”, he admits.

As The Independent Barents Observer visits Storskog a major group of migrants gets ready for biking across the border. A few minutes earlier, Russian border guards have handed over the group’s passports to Norwegian colleauges. The passports have subsequently been studied by the Norwegian side, and then returned to the Russians guards.

Then, the bicycles come rolling across the border and fills up the whole square in front of the customs station.

After a few minutes of chaotic disorientation, the group lines up in a row and is then taken to nearby tents or barracks. Later, theyw will be sent to transit reception centers either in Kirkenes downtown or to a new major facility located in an abandoned military compound.

”The good thing up here is that we know the identity of all the people coming over”, Granberg says. In southern Norway, hundreds have made it into Norway without any ID papers at all.

After further identity controls in the Kirkenes reception centers, the migrants with legal residency in Russia are quickly returned across the border, the police representative says. The Afghans who have been expelled from Russia will be sent back to Afghanistan, he adds.

There have also been cases when migrants themselves have chosen to return to Russia immediately after crossing the border.

After arrival at Storskog, the migrants’ bicycles, many of them brand new, are thrown into a garbage container. Acquired in Russia, they do not meet Norwegian technical standards and are all wrecked. Every day, the border police fills up at least one container, the police says.

While most of the migrants crossing the border until recently were Syrians, the lion’s share is now Afghans. Police figures show that a total of 454 Afghans in week 44 applied for asylum in Norway. The number of Syrians was 96. Also another of other nationalities were represented on the list, among the Iraqis (96), Egyptians (38) and Pakistanis (25).

”None of them have Schengen visas, and a great share of them are expelled from Russia”, Granberg confirms.

A closer look at the people’s identity reveal that many have lived in Russia for years, speak fluently Russian and have permanent residency in Russia.

They have little chances of getting residency in Norway, the police representative underlines.