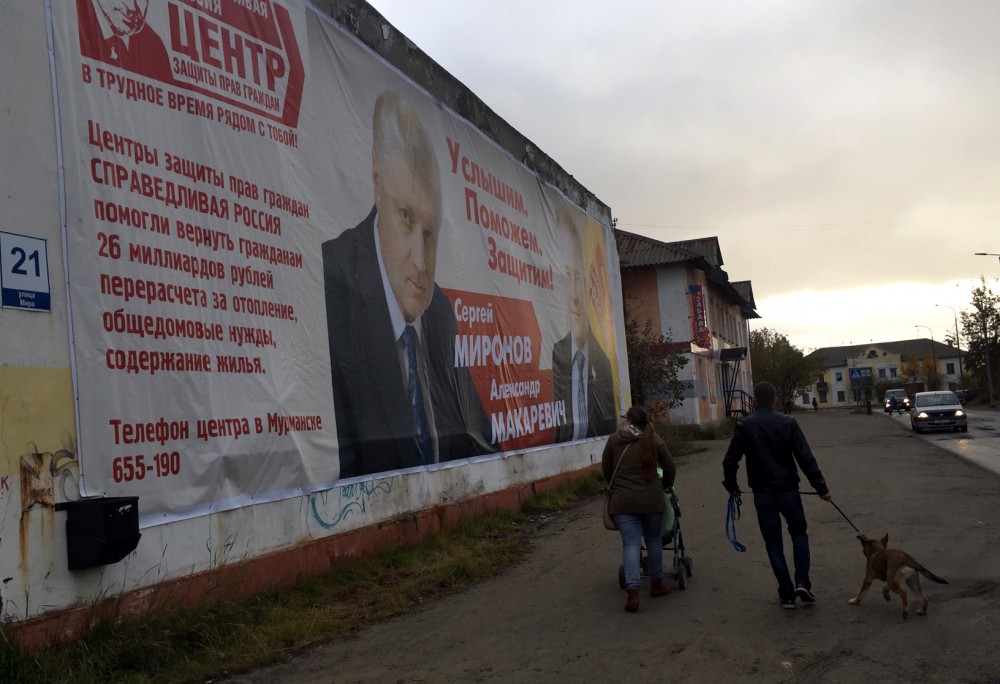 «This year’s election campaign has proceeded quietly without offenses and unnecessary tensions», a prominent representative of the United Russia party in Murmansk says.
By

Before the last State Duma elections in 2011, there were protest rallies in a number of Russian cities and opposition groups made bold headlines. Not so this year.

Both election watchdog Golos and the Committee of Civic Initiative argue that the 2016 election campaign is the most dull and least active in many years. A new report from the latter argues that it was hard to discover any signs of election campaigning in a number of regions until the last remaining month.

Like in the rest of the country, the United Russia in Murmansk controls all key political institutions in the region, including the Governor’s office, the regional parliament and most town assemblies.

Sergey Dubovoy, party secretary of United Russia’s regional office in Murmansk, says the election campaign has proceeded «without offenses and unnecessary tensions». That is because there are no clear alternatives to the government-ruling United Russia party, he argues in a comment to newspaper SeverPost.

Far from everyone agrees. Opposition groups accuse the United Russia of exploiting  available administrative resources to promote its interests in public events and the media.

Not fair play
«Compared with the 2011 elections, the Government has created new rules that restricts the rights of parties. They have control of the media and public campaigning. We have no funding to buy big posters to place along the streets like Edinaya Rossiya has», Oleg Drozdev, leader of liberal party Yabloko in Murmansk, says to the Barents Observer.

According to campaign leader of the regional Communist Party, Mikhail Andropov, the authorities have put various hurdles in the way of the opposition parties and limited their access to the military towns. The Communist Party campaigners were not allowed entry to Sputnik, the military town in the Pechenga district, Andropov says on the party website.

However, despite their protests, opposition groups this year never managed to stir uproar in public debate.

According to newspaper Nezavisimaya Gazeta, a quiet election campaign is actually what the United Russia party wants. In an editorial, the newspaper argues that the government-ruling party might want a low voter turnout. A high turnout usually implies a high level of political debate, tensions and competition between parties. That is not in line with the style of United Russia.

The opposition in Murmansk
In Murmansk, it is Aleksey Veller, the city Mayor of Murmansk, who is the United Russia candidate to the State Duma. He is seeking to take over the seat from Valery Yazev, the party representative who has been serving in the parliament body the last five years.

In addition, Murmansk is holding regional duma elections. In the current regional duma, it is the United Russia party which holds the biggest number of seats. In the previous 2011 elections, the party won 32,2 percent of the votes ahead of the Communist Party’s 22,9 percent, the A Just Russia’s 21,6 percent and LDPR’s 19,5 percent.

The United Russia is under growing pressure. A recent poll from the Levada Center shows the support from the party has dropped from 42 percent in April this year to 31 percent in August. That is the lowest level on record.

And Murmansk is among the regions with the lowest support for the government-ruling party. In the 2011 State Duma election, the United Russia got 31,9 percent of the votes, among the worst result for party in the whole country.

No OSCE observers in town
There is significant a explosive power in the 18th September election. But on the surface, the 2016 elections campaign has appears calm and silent.

Therefore, perhaps no wonder that the OSCE’s Election Observation Mission ODIHR will not send any of its observers to Murmansk. In an interview with Izvestia, Jan Petersen, the Norwegian leader of the monitoring mission, confirms that Murmansk is not among the regions to be monitored. A total of 420 election observers from the organization will be in Russia on the 18th September, the OSCE informs.