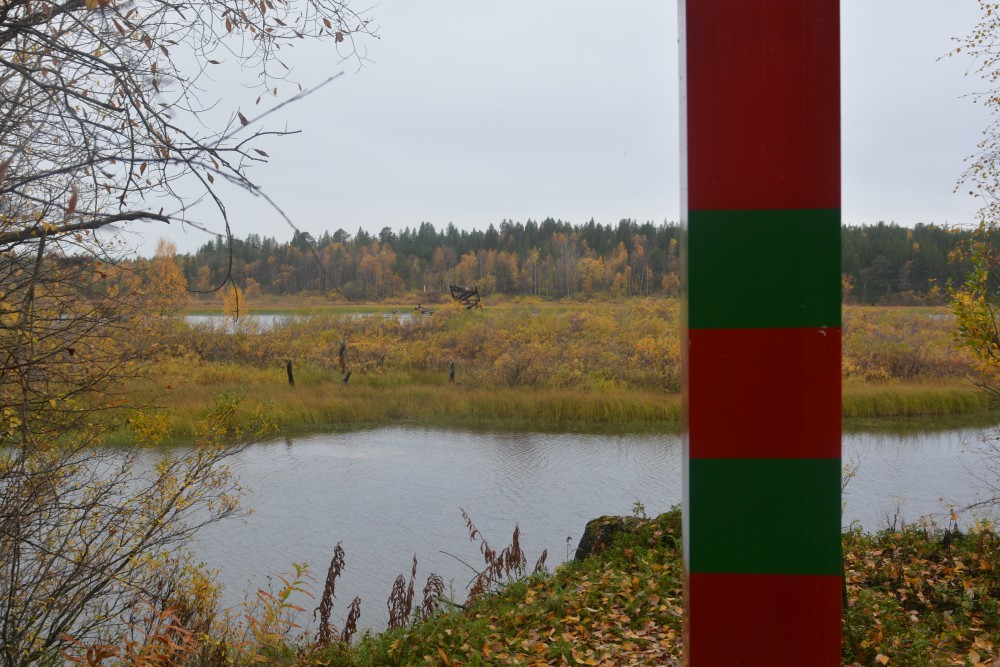 Russian border pole on the east side of the Pasvik River. Photo: Thomas Nilsen

Two very different views on what happened at a joint Norwegian, Russian Border Guards meeting in Kirkenes.
Read in Russian | Читать по-русски
By

“International terrorist organizations can use the border between Russian and Norway for transfer of weapons. This conclusion was made after the two countries’ security forces from Russia’s FSB Border Guard Unit of the Western Arctic Regions and the Norwegian Coast Guard forces met in the port of Kirkenes (Norway),” Interfax reports.

Following the meeting, a protocol was signed, which defines the main directions of bilateral border cooperation for the coming year.

Asked to comment on FSB’s terrorist weapons smuggling claim, neither the Norwegian Coast Guard, nor the Norwegian Police in charge of border control can confirm.

The Norwegian Joint Headquarter confirms to the Barents Observer that a meeting took place in Kirkenes on August 30th and 31st.

Commander Jens Høilund at the Norwegian Joint Headquarter says to the Barents Observer that terrorists’ possibilities to smuggle weapons across the border was not an issue at the meeting.

“The protocol, which is not classified, does not mention this topic. It is not mentioned any other places either,” says Jens Høilund.

The Norwegian Joint Headquarter with the Coast Guard has regular meetings with FSB Border Guard Service. In Russia, it is the FSB that is in charge of the Coast Guard.

The week before Chief of the Norwegian Joint Headquarter and FSB Coast Guard, another top FSB official came across the Norwegian border at Storskog. Security was tight when the motorcade of five cars, including an armored vehicle with Army General Vladimir Kulishov came for talks with Norwegian Police officials.

General Kulishov, second in command in FSB, had never been to Norway before.

Head of the Norwegian delegation meeting the top FSB official was National Police Commissioner Odd Reidar Humlegård. The meeting took place at a guest house only some few hundred metres from the border checkpoint at Storskog and the delegation never went the 14 minutes drive to the town of Kirkenes.

Senior Adviser Kåre M. Hansen with the National Police Directorate says to the Barents Observer that terrorism and weapons smuggling across the border was not an issue at the meeting.

“No, terrorism was not an topic at the meeting between the Police Directorate and FSB. The topic for the meeting was general discussions regarding the migration challenges in 2016, expected traffic at Storskog – Borisoglebsk checkpoints for 2017,” Hansen says.

He says both parties agreed on establishing direct contact between Finnmark Police Distric and FSB Murmansk to fight crimes in the waters off the coast of Finnmark and Murmansk.

In November last year, FSB issued a special warning to the citizens of Russia’s border towns Nikel and Zapolyarny. Citizens were asked to be on alert against suspicious people from North Caucasus and Central Asia.

Ask to comment on the warning, Senior Advisor Martin Bernsen with Norwegian Police Security Service (PST) told the Barents Observer there were no reason to fear terror on the Norwegian side of the border.

“So far, we have not been worried. We have not seen any ISIL sympathizers that have entered the country through the inflow of refugees,” Martin Bernsen explained.

Some 5,500 migrants came across the border to Norway from Russia in the north on what became known as the Arctic Mirgrant Route.