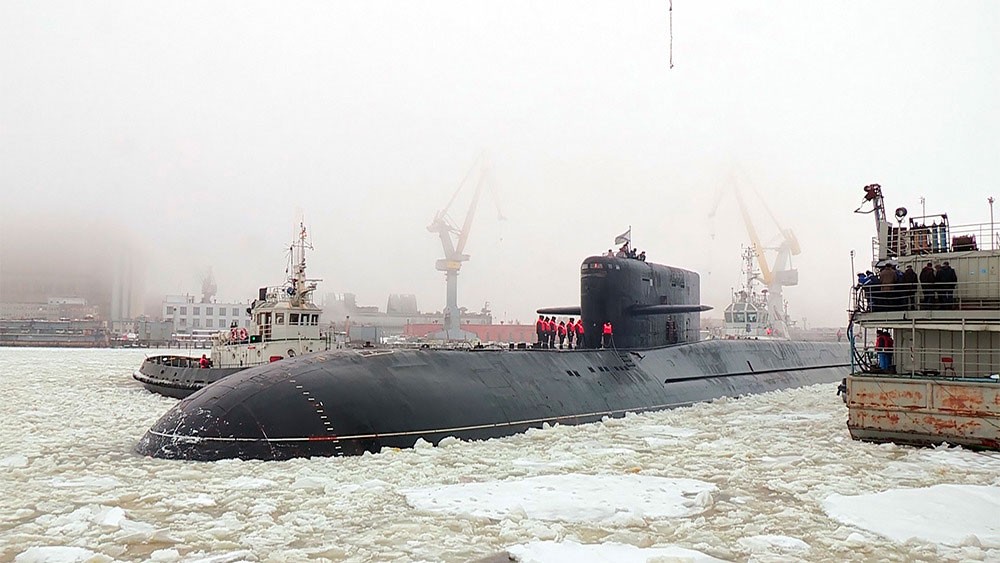 The "Podmoskovye" in Severodvinsk. Photo: star.ru

The Zvezdochka yard outside Arkhangelsk, northern Russia, demands another 6.8 billion ruble for its comprehensive modernization of nuclear submarine «Podmoskovye». The ministry responds with a 3.7 billion suit against the yard.
Read in Russian | Читать по-русски
By

The «Podmoskovye» is not an ordinary submarine.

The vessel, originally a Delta-IV class sub built in the 1980s, can carry mini-submarines aimed at detecting and protecting underwater intelligence cables in the Barents and Norwegian Sea and plays a core part of Russia’s sub-sea intelligence gatherings linked with the Main Intelligence Agency, GRU.

The submarine is now in the center of a heated conflict between the Defense Ministry and shipyard Zvezdochka. According to the yard, the ministry has 6.8 billion rubles of unpaid bills.

In 2004, the two parts signed a 22.8 billion ruble contract on the comprehensive upgrade of the vessel. However, Zvezdochka argues that it has only got 16 billion of the sum. In late December last year, it filed a 6.8 billion ruble suit against the ministry. That claim was turned down by the Moscow Arbitrary Court on 9th January, Interfax reports.

However, that is not the end of the story.

On January 13th, the Ministry responded with a 3.7 billion suit against Zvezhdocka.

According to TASS, behind the suit might lie a contract from 2014 which includes service of Soviet-era submarines. In a comment, company representative Yevgeny Gladyshev says the suit against Zvezdochka is not the first, but by far the biggest ever.

The case was filed on the 11th January, and has not yet been accepted by the Moscow Arbitrary Court, Interfax reports.

The «Podmoskovye» (K-64) was originally included in the Soviet Northern Fleet in 1987, and based in Olenya Bay on the Barents Sea coast until 1999 when it was taken out service. However, unlike the many other Soviet-era subs, the «Podmoskovye» was to have its life significantly extended.

After 16 years of reconstruction, the vessel on 26the December 2016 sailed out of Severodvinsk and was officially handed over to the Northern Fleet.

It is today one of nine nuclear-powered subs deployed in the 29th separate submarine brigade of the Northern Fleet.

The special submarine squadron has means and technology to dive deeper than any of the other weapon carrying war-submarines sailing for the Northern Fleet.

It is also believed that the «Podmoskvye» can carry the special-purpose «Losharik» mini-submarine below the hull.

The submarine can also bring - or remove - other small installations and devices for military purposes to be placed on the sea floor.

Late 2016, the Zvezdochka uploaded a rare video to YouTube screening the submarine as it sails on its maiden voyage.