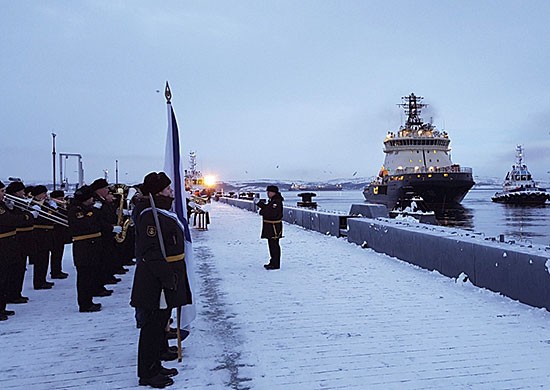 The "Ilya Muromets" comes to the Northern Fleet. Photo: Mil.ru

The ship was greeted from the waterfront of the Kola Bay by Head Commander Nikolay Yevmenov as it today for the first time arrived in the Northern Fleet headquarter city, the Russian Navy informs.

The 84 meters long multi-purpose vessel is considered a much-needed asset as the Russian Navy increasingly expands sailing into remote Arctic waters. The «Ilya Muromets» will strengthen the Northern Fleet’s capacity to operate in distant parts of the Arctic, including in the areas around the new bases of Franz Josef Land and the New Siberian Islands.

The vessel can independently break through 1,5 meter thick ice.

Construction of the ship started in April 2015 and in June 2016 the ship was put on the water. Commander-in-Chief of the Russian Navy Admiral Korolyov previously called the launch of “Ilya Muromets” a significant event.

“Use of the newest Russian technologies in the construction of ice-class ships for the Navy allows one to make the conclusion that domestic military shipbuilding has been able to preserve and develop its potential in this field,” he underlined as construction of the ship started in 2015.

The vessel is the first of a planned series of four icebreakers, and is the first naval icebreaker to be build in Russia in 45 years have a displacement of 6000 tons and can make 15 knots.