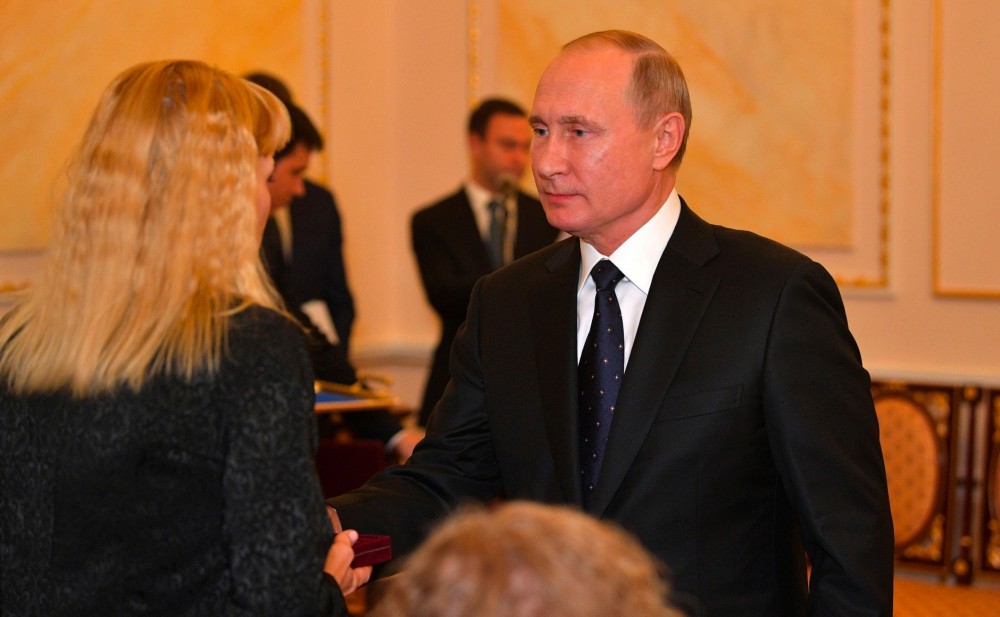 The president awards medals of bravery post mortem to the deceased nuclear experts and expresses condolences with their families.
Read in Russian | Читать по-русски
By

«They were all excellent and talented specialists, top-class test operators,» Putin underlined in his meeting on Friday with the mens’ widows.

«To devote oneself, one’s life, to such a venture — that is a courageous and serious decision by true men, citizens and patriots of the country,» the President said.

At least five men died when a nuclear-engined new weapon exploded during testing near the Nenoksa testing site in the White Sea.  The weapon tested is believed to be the Burevestnik, the nuclear-powered intercontinental cruise missile, dubbed the SSC-X-9 Skyfall by NATO.

The accident happened during testing of «the newest missile engine unit», the Kremlin informs.

According to Putin, the men killed had «taken on themselves a special mission — to protect Russia», and they did so «with glory until the end.»

It was in the morning of 8th August that the blast happened at Nenoksa naval missile testing site about 25 kilometres northwest of Severodvinsk by the White Sea.

State nuclear power company Rosatom soon confirmed that the accident happened at a «military training site in the Arkhangelsk region.» Five representatives of the company died in the accident.

Russia’s Defense Ministry was early stating that there were no releases of radioactivity.

However, regional news portal 29.ru reported with reference to Roshydromet that radiation levels exceeded normal background in between 6 to 16 times on Thursday. Six out of eight monitors in Severodvinsk showed gamma radiation values higher than normal.

Hospital doctors in nearby Arkhangelsk later told journalists that three injured men arrived at the hospital around 4:30 pm, naked and wrapped in translucent plastic bags.

According to the doctors, the patients were first treated at the Arkhangelsk Regional Clinical Hospital before their were flown to Moscow. Two of the three reportedly lost their lives en route to the airport.