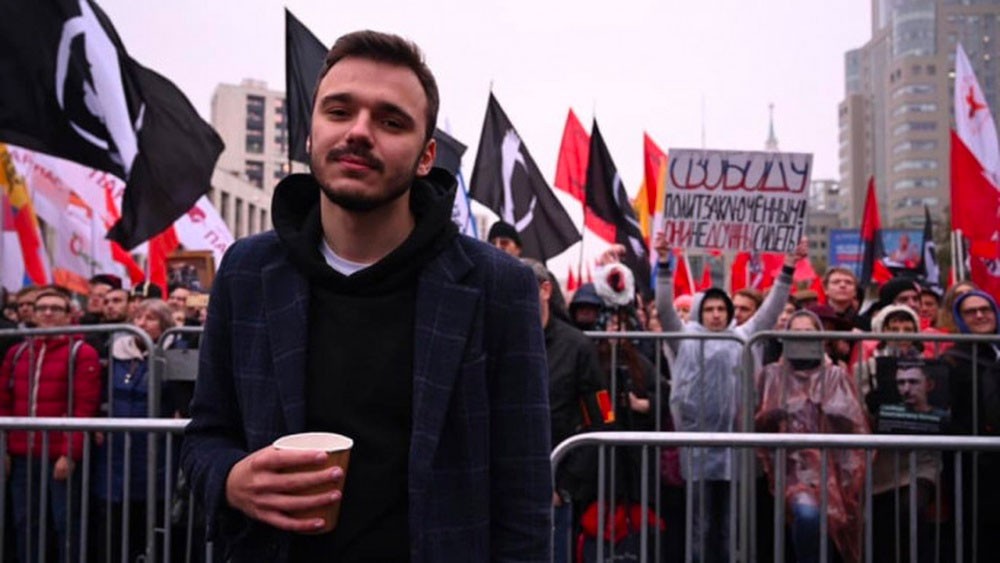 Ruslan Shaveddinov is close associate of Aleksey Navalny and was forcefully sent to Novaya Zemlya as conscript soldier in December 2019. Photo: Navalny.com

Ruslan Shaveddinov used to march the streets of Moscow in protests against the Kremlin. Now, he drives missile-carrying trucks in one of Russia's remotest military bases.
Read in Russian | Читать по-русски
By

Shaveddinov has been in Novaya Zemlya since police on the 23rd December broke into his Moscow apartment and brought the regime-critical activist to a military assembly point for conscripts. He was subsequently put on a plane to Rogachevo, the far northern military settlement.

It was a kind of kidnapping, the colleagues of Shaveddinov say about the detention.

Aleksey Navalny, the politician and leader of the Anti-Corruption Fund, underlines that Shaveddinov has been unlawfully deprived of his freedom and must consequently be considered a political prisoner.

Shaveddinov has long argued that he suffers from health problems that make him unfit for service.

The activist is a close associate of Navalny. He has served as his press secretary and headed one of the online Navalny Live shows and also taken part in the anti-corruption activities of the opposition leader. Along with Navalny, he has been imprisoned following anti-government street rallies.

Shaveddinov was long refused to call home and little information came out about his life conditions in the high Arctic military base.

However, since January information about his life conditions has leaked from Rogachevo, the military towns where Shaveddinov serves.

Military representatives on site confirm that they are “constantly taking photos” of the activist, Mediazona reports. They also say that he serves in an air defense unit and that his duties includes driving of missile-carrying trucks, Interfax writes.

The Anti-Corruption Fund believes that its employee is unlawfully being deprived possibility to connect with the outside world and took the case to court. On the 26th February they lost the case in a Moscow court.

The Rogacheva base is located at 71 degrees north and living conditions are extreme. According to Ivan Zhdanov, Director of the Anti-Corruption Fund, the situation on site is “worse than in a prison.”

In Soviet times, it was not uncommon that “disloyal” young men were sent to the remote archipelago to serve in local military-construction brigades.

The far northern archipelago is today again a strategically key area in the Russian Arctic. Military capacities on site are bolstered with new hardware including the S-400 air defense system. The remote archipelago is also believed to be used for advanced new weapons testing.

The detention of Shaveddinov and his is only one in a bigger number of state clampdowns on Navalny and his followers.

In February this year, state prosecutors pressed charges against Anti-Corruption Fund Director Ivan Zhdanov, after he refused to remove from YouTube a video that reveals grave corruption practices by former Premier Dmitry Medvedev.

In early March, the bank accounts of Aleksey Navalny as well as his whole family was emptied in what the politician says was a move initiated by the authorities.