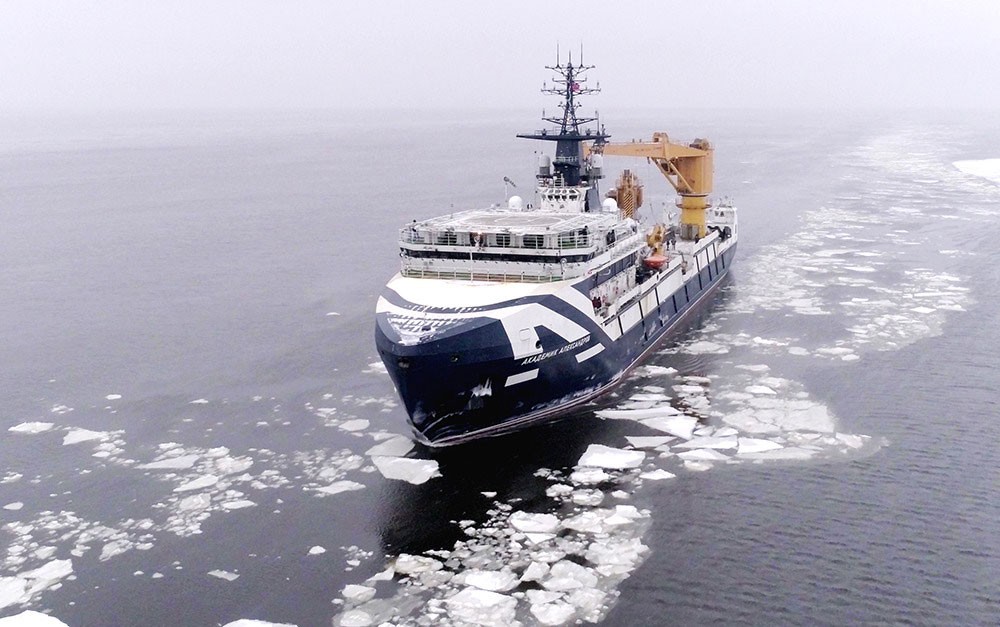 More than a year after schedule, the Zvezdochka yard in Severodvinsk, northern Russia, has officially handed over the “Akademik Aleksandrov” to the Northern Fleet.

The ship is the 3rd in the Navy’s new series of special-purpose ships made for transportation of big-dimension military and special equipment, as well as search and rescue operations.

It was put on the water in Severodvinsk in May 2017 and has since undergone final construction works and testing.

From before, sister ship “Zvezdochka” is serving in the Northern Fleet, while the Pacific Fleet operates the “Akademik Kovalyov”. A fourth ship of the kind is currently under construction at the yard in Severodvinsk.

The “Akademik Aleksandrov” will be involved in some of the most top secret operations of the Russian Navy. No wonder therefore that also the ceremony in Severodvinsk proceeded without public attention. Its official handover to the fleet became known in mid-April, several weeks after the actual event.

A source in the Russian shipbuilding industry confirms to news agency TASS that the scarce information about the handover is connected with the fact that the vessel is built on an order from the Main Directorate for Deep Sea Research, the top secret unit directly subordinated the General Staff of the Russian Armed Forces.

Russia has over several years actively expanded its fleet of special purpose vessels. Several of them are built for seabed operations possibly including sabotage operations against underwater cables.

The “Akademik Aleksandrov” and its sister vessels are believed to be able to carry small-scale submarines for special operations. As reported by defense analyst H.I. Sutton, they are also believed to be involved in testing of new weapons, including the Poseidon underwater nuclear drone.

The Main Directorate for Deep Sea Research, nicknamed GUGI, is based in the Kola Peninsula about 100 kilometers east of the border to Norway. As previously reported by the Barents Observer, the Directorate is a branch directly under General Staff of the Armed Forces.

In addition to the “Akademik Aleksandrov” and its sister vessels, the Directorate manages a fleet of nine nuclear-powered submarines and several more surface vessels.

Among the Directorate’s submarines are the “Podmoskovye” and the “Belgorod”. The former in 2019 made headlines when a fire raged through special-purpose sub “Losharik” and killed 14 sailors. The “Podmoskovye” is the mother ship of the far smaller “Losharik”.

The “Belgorod” is still under construction and will when completed be the world’s largest sub.

While the submarines are based in the Kola Peninsula, the ”Akademik Aleksandrov” is likely to be based in Severodvinsk together with the “Zvezdochka”.

Both the “Belgorod” and the “Podmoskovye” will be dedicated to carry out secret missions in Arctic waters.

For the “Belgorod”, that includes operations related to the Poseidon project, the 70 feet underwater drone powered by a small nuclear reactor. The Poseidon can cross entire oceans at depth down to 1,000 meters and is nearly impossible to intercept.

Tipped with a megatons-size thermonuclear warhead the drone could change global nuclear deterrence.