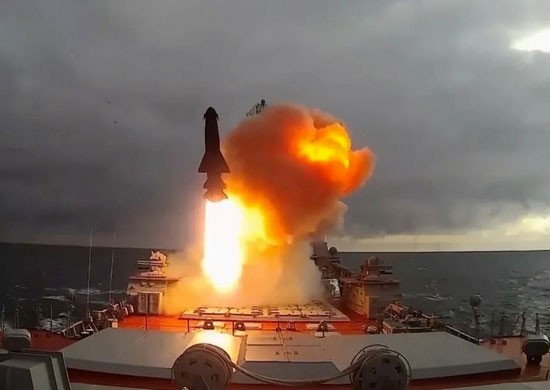 With nuclear-powered battle cruiser "Pyotr Veliky" at the helm, the Northern Fleet starts its biggest exercise this year.
Read in Russian | Читать по-русски
By

The 252 meter long cruiser on the 7th July set out from Northern Fleet headquarters of Severomorsk and soon joined a powerful armada of more than 30 other vessels, including submarines and support ships. Among them is missile cruiser “Marshal Ustinov”, the Northern Fleet informs.

In addition, more than 20 aircraft and 40 pieces of armament from air defense and coastal rocket and artillery units are engaged.

The exercise is headed by Aleksandr Moiseev, Head Commander of the powerful force. According to the vice-admiral, the exercise is the Northern Fleet’s biggest this year. A wide range of various training will take take place, including tactical drills and shooting with rockets, missiles, artillery, torpedos and other kinds of weapons.

On their way out at sea, the “Pyotr Veliky” and “Marshal Ustinov” on the 8th July conducted drills on “neutralization of enemy coastal positions with artillery fire.” The subsequent day, the two ships with support from aircraft Tu-22M3 conducted shooting with cruise missiles Granit and Vulkan on simulated enemy targets, the Navy informs.

At the same time, the supersonic bombers launched air-to-surface missiles on the same targets from 400 km distance

The vessels that are part of the exercise are reported to be scattered over a vast 250,000 square kilometer area. Civilian ships and aircraft in the area have been notified, representatives of the Armed Forces say.

In a comment, Head Commander Moiseev explains that “the group of diversified forces have conducted a series of drills on support for the fleet’s strategic nuclear forces, search and elimination of simulated enemy submarines, tactical engagements and means of attack of enemy naval groups, protection of coastal areas, protection of naval communications, protection of maritime economic activity.”

In an interview with Defense Ministry newspaper Krasnaya Zvezda the Northern Fleet Commander in early June announced that parts of the up-coming exercise will be held also in the Norwegian Sea.

“Maneuvers will take place in the Northern Fleet’s ranges in the Barents Sea. We will exercise individual events in the Norwegian Sea,” Vice-Admiral Aleksandr Moiseev said.

He also underlined underlined that all maneuvers “are defensive in nature and are not directed against anyone.” However, he said, the “actions of our forces are planned taking into account the international situation.”

Norway, though, is not informed about the Russian navy plans.

“We are not informed about such an exercise via any formal channels,” spokesperson for Norway’s Joint Head Quarters, Jørn Hammarbeck, said in a phone interview with the Barents Observer.

Russia’s Northern Fleet has traditionally had the Barents Sea as part of its key training area. However, over the last years the naval force has increasingly stretched training activities westwards into areas such as the Norwegian Sea.

It is the third year in a row that the Russian Navy exercises with as many as 30 ships in northern waters.

In connection with last year’s exercise, Norway’s Defense Chief Haakon Bruun-Hansen said that the objective of the training is to block NATO’s access to the Baltic Sea, North Sea and the Norwegian Sea.

«This is an exercise where Russia seeks to protect its territory and its interests by deploying highly capable ships, submarines and aircraft with the purpose of preventing NATO of operating in the area,» Bruun-Hansen said.