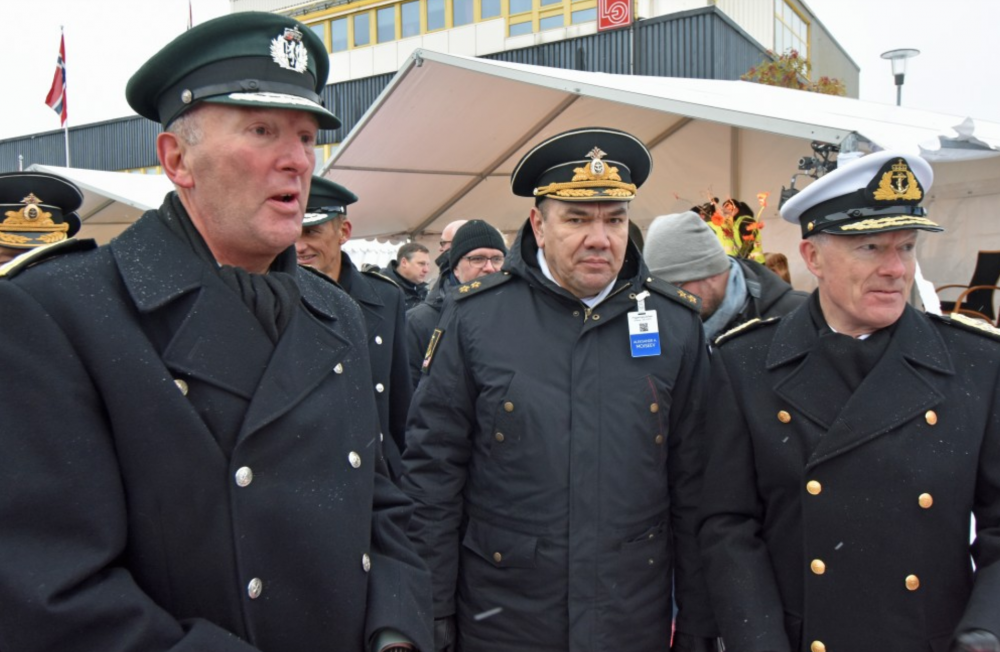 With short notice, the Russian Northern Fleet announces via its own media a large-scale exercise to happen later this month in the Barents- and Norwegian Seas involving 30 surface ships, a few submarines, support vessels and more than 20 aircraft.
Read in Russian | Читать по-русски
By

It is in a lengthy interview with the Russian Defense Ministry’s newspaper, Krasnaya Zvezda, the Northern Fleet Commander informs about the up-coming large-scale exercise.

“Maneuvers will take place in the Northern Fleet’s ranges in the Barents Sea. We will exercise individual events in the Norwegian Sea,” Rear-Admiral Aleksandr Moiseyev said.

The Commander names the exercise “large-scale” and adds that a “set of tasks will be exercised by various groups of forces.”

“It will involve more than 30 surface ships, submarines and support vessels, [and] more than 20 aircraft of various types,” the Rear-Admiral elaborated.

Aleksandr Moiseyev underlined that all maneuvers “are defensive in nature and are not directed against anyone.” However, he said, the “actions of our forces are planned taking into account the international situation.”

Norway, though, is not informed about the Russian navy plans.

“We are not informed about such an exercise via any formal channels,” says spokesperson for Norway’s Joint Head Quarters, Jørn Hammarbeck, in a phone interview with the Barents Observer.

He adds that Russia, like all countries, is free to exercise its navy in international waters.

In early May, a group of U.S. and British surface warships sailed into the Barents Sea for the first time since the mid-1980s.

U.S. strategic bombers have also on several occasions the last year been on missions over Scandinavia and above the Arctic Circle.

Third year in a row

This will be the third year in a row the powerful Russian Northern Fleet exercises with more than 30 warships in the northern waters.

In June 2018, the Northern Fleet kicked off an alarm-drill and sailed out 36 warships from the Kola Peninsula to the Barents Sea. Also at that time, about 20 aircraft participated, the Barents Observer reported.

Last August, 30 Russian warships staged a sudden show of force outside the coast of Norway in a move that took Norwegian military officials by surprise.

Last year’s Russian navy exercise in the Norwegian Sea consisted of ships from three of the country’s fleets; the Northern Fleet, the Baltic Fleet, and the Black Sea Fleet.

Vice-Admiral Aleksandr Moiseyev did not elaborate on exact dates for the exercise later this month, but he told that Northern Fleet vessels, including the nuclear-powered Oscar-II class submarine «Orel», will sail to St. Petersburg for the Main Naval Parade taking place in late July.

“Orel” was also in 2018 participating in the Naval Parade.

The inter-naval transition from the Northern Fleet to the Baltic Sea this summer will also include the anti-submarine destroyer «Vice-Admiral Kulakov».

2020 will be the fourth year in a row that Northern Fleet sends a nuclear-powered submarine around Scandinavia for participation in the Naval Parade.