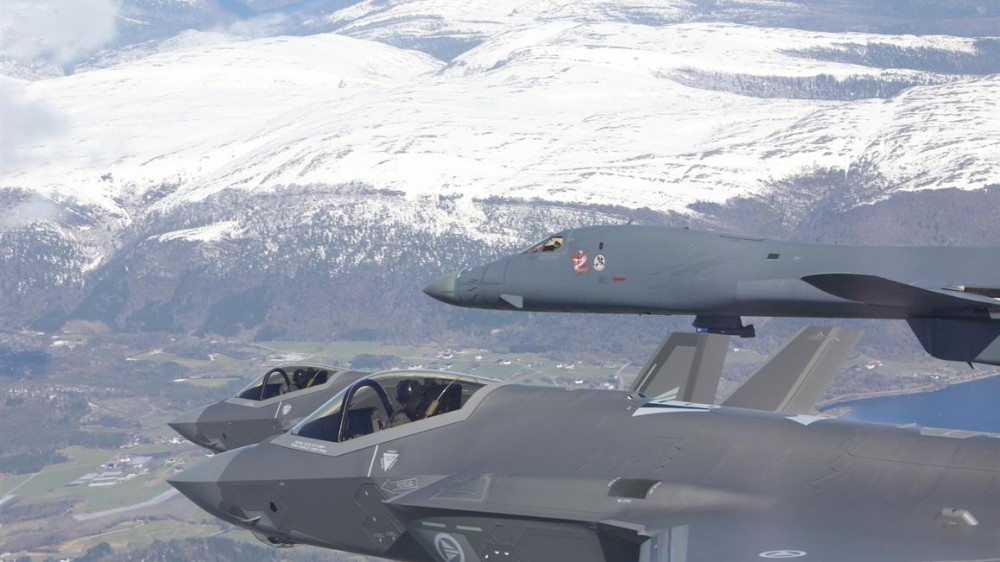 The US strategic bombers were exercising in the airspace over both Norway and Sweden on May 20.
Read in Russian | Читать по-русски
By

This is the first time that American strategic long-range bombers are exercising in Swedish airspace, Dagens Nyheter reports.

Norway’s Defense command says Wednesday’s exercise is “one of the largest of its kind, and several allied and partners trained along with the US B-1B.”

The B-1B bomber is one of the three types of US strategic bombers. The two others are the B-2 stealth aircraft and the B-52.

Norwegian F-35s were flying together with the B-2 in March this year in Icelandic airspace and over the North-Atlantic. Last November, Norwegian F-16s followed three U.S. B-52 bombers all north to the Barents Sea.

The Norwegian military says such joint flight missions are of high priority.

“Today we have conducted complex flight operations with advanced systems, both on the ground and in the air,” says Lieutenant Colonel Ståle Nymoen. He is the commander of the 332 squadron which operates the F-35s from Ørland airbase.

In Sweden, the exercise included refueling of the Jas 39 Gripen fighter jets from an American KC-135 tanker.

“The sortie was conducted by the Swedish air combat command,” the Swedish Armed Forces informs.

Sweden is not a NATO member but is a partner country. In 2014, Sweden signed a host country agreement with NATO allowing for the allied forces to conduct joint training exercises in the country.

“This has been a good exercise, in which we have demonstrated interoperability and our role as a reliable and relevant partner. The transatlantic link and combined exercises with US air units increase our capability. Our task, single-handedly as well as with others, is to create security and stability in the Baltic Sea region,” says Air Force Commander, Major-General Carl-Johan Edström.

Norway, as one of NATO’s founding members, points to the United States as the most important ally for defending Norway in case of a crisis or conflict.

“The fact that we manage to operate together increases our ability to defend Norway together with our allies,” Lt. Col. Nymoen says.

Neither the Norwegian nor Swedish statements geolocate the flight routes for the joint operations with the American bombers, but photos posted by the Norwegian defense is from Ørland airbase near Trondheim.

Also on Wednesday, two F-16s from Bodø airbase were scrambled to identify Russian military aircraft outside Norwegian air space in the north.

U.S. Air Force is normally participating in the bi-annual exercise Arctic Challenge, where Norway, Sweden and Finland train together in the skies over northern Scandinavia. The northern airbases of Kallax, Bodø and Rovaniemi are then hosting the planes.

Earlier this spring, the U.S. Air Force deployed two B-1 bombers from the Ellsworth Air Force in South Dakota to Europe. The planes fly out of Fairford base in the United Kingdom and were earlier in May on several missions in the Baltic overflying Denmark, Lithuania, Latvia and Estonia.

“Training with our NATO allies and theater partner nations contributes to enhanced resiliency and interoperability. Strategic bombers contribute to stability in the European theater by sending a clear deterrence message to any potential adversary,” a May 6 statement from the U.S. Air Force in Europe said.