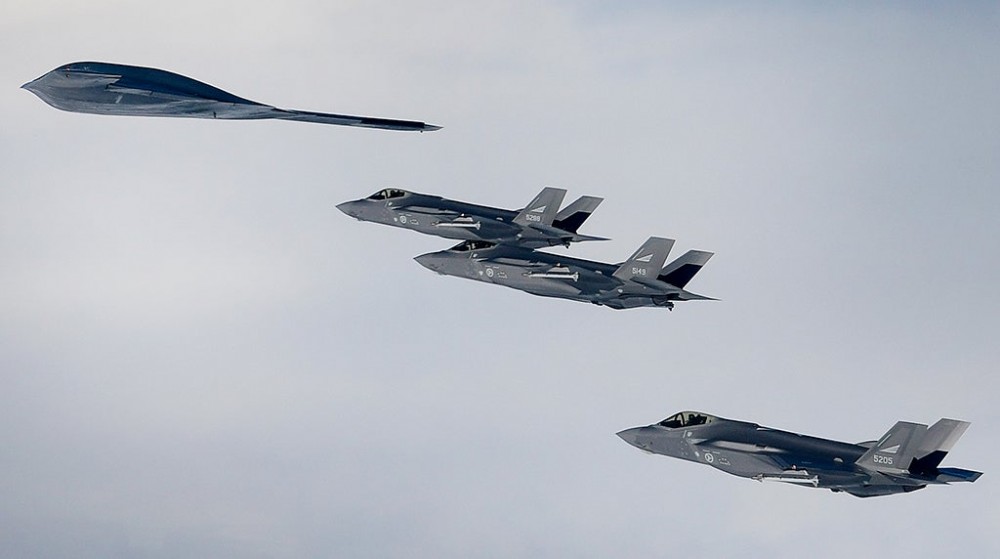 Less than a week after a pair of Russian strategic bombers were flying south outside European airspace, two American B-2A bombers were escorted by three Norwegian F-35 fighter jets over Iceland and the North Atlantic.
Read in Russian | Читать по-русски
By

The two U.S. Air Force stealth bombers took off from Fairford airbase in England and were met by three Norwegian F-35s over Iceland. Norway has currently four F-35s based at Keflavik, conducting NATO’s Air Policing mission in Iceland (IAP).

Monday’s mission in the skies over Iceland and in international airspace in the North Atlantic is the first time Norwegian F-35s flies together with the B-2A long-range bombers.

“This was indeed a special moment,” says Sigurd Tonning-Olsen, spokesperson with the Joint Headquarters on phone from Keflavik airbase on Iceland.

“The pilots were really excited.”

Tonning-Olsen says the F-35s were in the air for about one and a half hours, of which some 30 to 45 minutes were joint training with the American B-2s.

Norway’s contribution to Air Policing at Iceland started in late February and ends later this week.

“We have had stormy and snowy days here,” Tonning-Olsen says.

“The F-35s have proven very good for this kind of winter climate.”

During the three weeks at Iceland, the F-35s have not been scrambled to identify Russian aircraft.

As previously reported by the Barents Observer, a pair of Russian Tu-160s came out of the Kola Peninsula and flew all south to the Bay of Biscay south of the United Kingdom last Thursday.

The aircraft were followed by Norwegian F-16s from Bodø, British Typhoon fighter jets, and planes from France.

Additionally, Northern Fleet Tu-142 maritime anti-sub hunters have been on three missions out of the Kola Peninsula towards the North Atlantic over the last three weeks.

The flights have by Norwegian military officials been described as “unnormal far south” into the so-called GIUK gap, the waters between Greenland, Iceland, and the United Kingdom.

This area in the northern Atlantic forms a naval chokepoint, important for the Russian navy in case of a conflict.

Submarines, surface warships, and planes from the Northern Fleet’s bases on the coast of the Barents Sea have several over the last two years exercised Russia’s bastion defense concept in the Norwegian Sea, aimed at protecting the strategic important ballistic missile subs sailing the Barents Sea and the Arctic in case of an escalating global conflict.

For Norway, training with allied NATO forces in the north is seen as a priority.

Detachment commander of the Norwegian Air Force’s IAP mission to Iceland, Lieutenant colonel Ståle Nymoen, says the joint flights with the American bombers are “an important training on integration together with our allied.”

Chief of the Defense Command, Admiral Elisabeth Natvig, adds: “The ability to interact with our allies increases our capacity to defend Norway.”

B-2 bombers were first time flying into the European Arctic last September. The mission took place outside the coast of Norway, but no Norwegian aircraft participated.

The B-2 has a low observable stealth technology designed for penetrating dense anti-aircraft defenses.

Russia has over the last few years deployed its most modern anti-aircraft missile systems, like the S-400, at several bases in the Arctic, including Franz Josef Land, Novaya Zemlya and the Kola Peninsula.