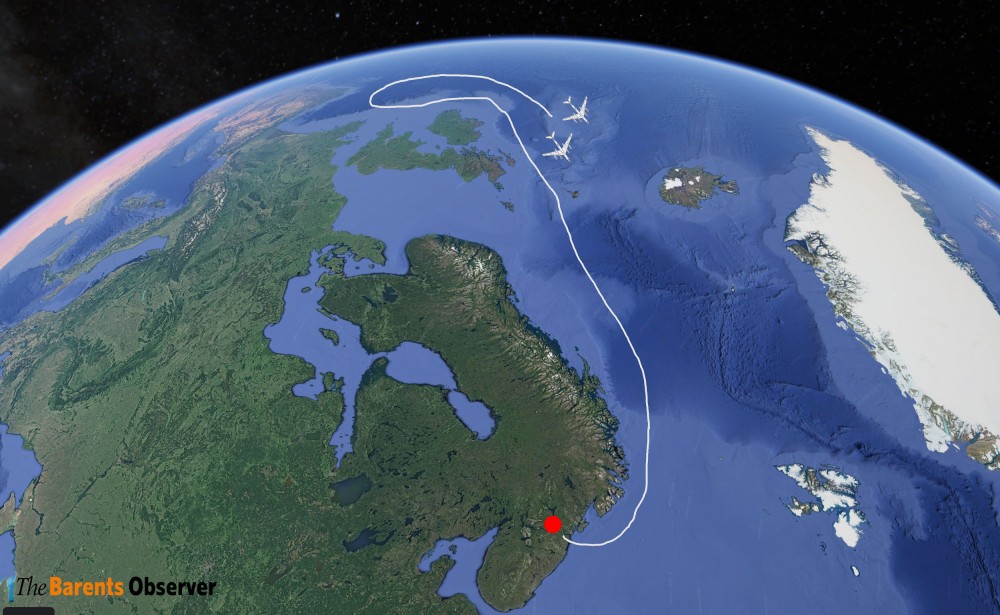 A pair of Northern Fleet Tu-142s has for the fourth time in just over two weeks been on mission outside Norway. The flight on Wednesday went all south to the Bay of Biscay.
Read in Russian | Читать по-русски
By

With U.S. Navy subs on exercise under the ice-cap in the Arctic and NATO allied winter war games in northern Norway, the Russian maritime reconnaissance and anti-submarine warfare (ASW) planes have shown special interest to the North-Atlantic since late February.

Although exercise Cold Response was canceled on Wednesday amid the coronavirus outbreak in Norway, a pair of Tu-142 was already in the skies on what likely became the longest flight route over international airspace in western Europe since the end of the Cold War.

Normally, the Northern Fleet’s fleet of Tu-142s are flying from Kipelovo-Fedotovo air base near Vologda. The latest flight, however, had take-off from Olenya air base on the Kola Peninsula, the twitter account @galandecZP informs. The account is known for tracking Russian military planes.

The flight is confirmed to the Barents Observer by Norway’s Joint Headquarters near Bodø.

Flying south from the Norwegian Sea in over the North Sea, the Russian planes were met by British Typhoon jets from the Lossiemouth air base in Scotland, the Royal Air Force informs.

“These Russian bombers do not comply with international air traffic rules, are a hazard to airliners and are not welcome in our airspace. RAF Typhoons, alongside out NATO allies ensured these Russian aircraft posed no hazard,” Wigston said in a news brief.

Flying west of Ireland, the Russian planes continued south to the Bay of Biscay where the French air force scrambled jets.

The previous flights by the Northern Fleet’s sub hunters, on February 26t and 27th, plus one flight on March 7th, were also flying further south than normal, as reported by the Barents Observer. The flight this week, though, went record far south before the planes turned north again towards the Barents Sea and the Kola Peninsula.

It is not known how many NATO submarines that are currently sailing the North-Atlantic.

The two submarines have already made surfacing through the ice on March 4th and March 7th near what the navy has named Camp Seadragon.

Radio Canada’s Eye on the Arctic news portal could yesterday inform about a pair of Russian Tu-142 sub hunters flying over the Arctic in international airspace over the Beaufort Sea on Monday. The planes came from an air base in Russia’s Far East.

The planes were intercepted by U.S. and Canadian jets off Alaska’s northern coast.

Commenting on the aircraft, Canadian defense expert Rob Huebert told Eye on the Arctic that Russia dispatched the maritime surveillance aircraft to not only keep tabs on the American exercise but also to demonstrate its own ability to counter U.S. and NATO moves in the north.

“They are probably listening, the probably have all sorts of electronic equipment set up to try to pick up on frequencies, behavior, and indication that is going to give them a heads up if things go violent in the future,” Huebert said.

Russia’s Northern Fleet has several times over the last two years exercised in the Norwegian Sea, drills that by western observers are believed to be part of the Bastion Defense concept.

Last August, the exercise Ocean Shield, originally said to be limited to the waters of the Baltic Sea, became the largest gathering of Russian navy vessels outside the coast of Norway in post-Cold War period.

In October, eight Northern Fleet nuclear-powered submarines suddenly sailed out and west from their bases on the Kola Peninsula. Several of them sailed into the Norwegian Sea, of which one Akula and one Yasen class sailed further south than the GIUK gap and stayed in the North-Atlantic for a long period before returning home to Christmas.