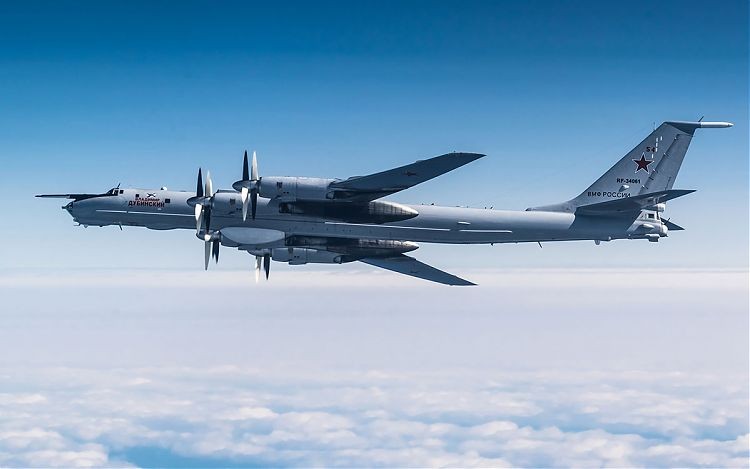 The Tupolev-142 is a maritime reconnaissance and anti-submarine warfare (ASW) aircraft derived from the Tu-95 turboprop strategic bomber. Photo: Russianplanes.net

Norwegian and British fighter jets were scrambled two times this week to meet a pair of the Northern Fleet’s ASW aircraft on training mission over the Norwegian Sea.
Read in Russian | Читать по-русски
By

Major Brynjar Stordal, press spokesperson with the Norwegian Armed Forces, said to the Barents Observer that “these Russian aircraft operates relatively routinely over the seas north of Norway,” but, he added “it is not common that they fly as far south as they did this week.”

The planes came out over the Barents Sea north of the Kola Peninsula, continued to west of the North Cape before heading south deep into the so-called GIUK gap (Greenland-Iceland-UK), the area in the northern Atlantic that forms a naval choke point. Breaking through the GIUK gap in a potential conflict would be important for the Russian navy when establishing the Bastion Defense concept, protecting the ballistic missile submarines patrolling in the Barents Sea and Arctic Ocean.

The two Russian planes flew so far south that even Royal Air Force Typhoon fighter jets were scrambled from the Lossiemouth air base in Scotland, the Express reported.

The Russian pilots, however, turned north again somewhere in between Norway and Iceland before meeting the British fighter jets.

The press service of the Northern Fleet in Severomorsk on the Kola Peninsula said in a statement that the “duration of the flight mission lasted for more than 12 hours.”

The Northern Fleet’s Tu-142 anti-submarine aircraft is a maritime patrol version of the Tu-95 strategic bombers. The main aim of the planes is to hunt NATO submarines and electronic intelligence.

The planes can also play an important role in search and rescue missions in the Arctic.

As previously reported by the Barents Observer, the Tu-142 and Il-38 maritime surveillance and sub-hunting aircraft are old and soon planned to be replaced by a converted version of the Tupolev 204 or 214 jet planes.

Russia’s Northern Fleet has several times over the last two years exercised in the Norwegian Sea, drills that by western observers are believed to be part of the Bastion Defense concept.

Last August, the exercise Ocean Shield, originally said to be limited to the waters of the Baltic Sea, became the largest gathering of Russian navy vessels outside the coast of Norway in post-Cold War period.

In October, eight Northern Fleet nuclear-powered submarines suddenly sailed out and west from their bases on the Kola Peninsula. Several of them sailed into the Norwegian Sea, of which one Akula and one Yasen class sailed further south than the GIUK gap and stayed in the North-Atlantic for a long period before returning home to Christmas.

On Monday, the multinational exercise Cold Response kicks-off in northern Norway with more than 15,000 soldiers from nine countries. The area of exercise stretches from Narvik to Porsangermoen in Finnmark, with the main activities to be located in the district of Troms.

Spokesman Major Stordal will not speculate about any link between the unnormal southbound flight paths by the Russian anti-sub aircraft and exercise Cold Response.

But, as he said, “we have experienced in the past that allied exercise activities in out neighborhoods has led to some increased activity from Russian surveillance capacities like this.”

Last week, Russian marines were conducting live-shooting training in the Pechenga valley about 20 kilometers from the Norwegian border. Also, a first-of-a-kind ship-launched firing of the new hypersonic Tsirkon missile took place from the Northern Fleet frigate “Admiral Gorshkov” from the Barents Sea towards a ground target at a military range in the Komi Republic.