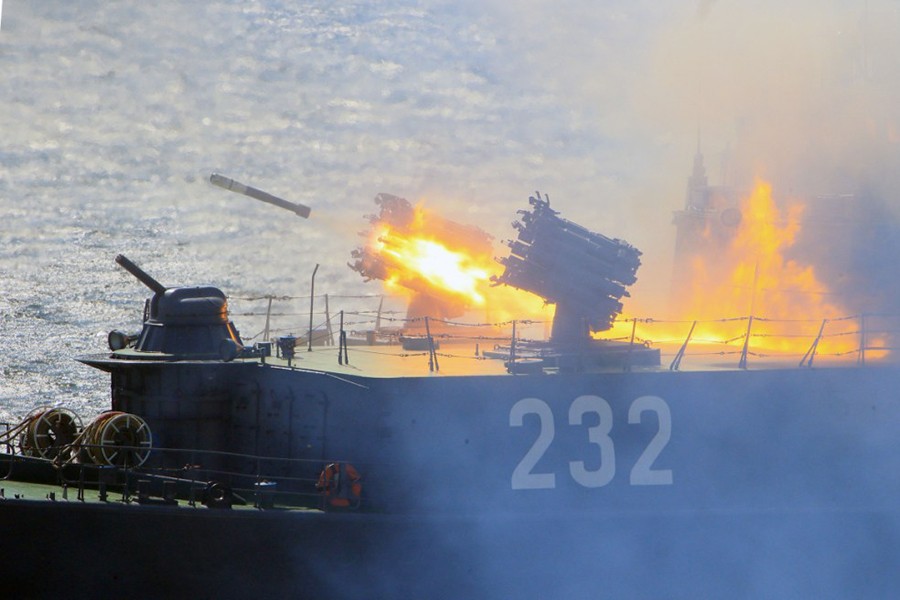 NATO deploys extra maritime patrol aircraft to keep track of a Northern Fleet group of warships currently sailing north for live-shootings in the Norwegian Sea near the Arctic Circle.
Read in Russian | Читать по-русски
By

The Russian navy vessels are currently sailing outside the west coast of Norway en route back north after participating the exercise Ocean Shield in the Baltic Sea.

“Four NOTAMs (Notice to Airmen) are announced for areas off the coast of Helgeland and Lofoten for the period August 14th to 17th,” says press spokesman with the operational headquarters of the Norwegian Armed Forces, Sigurd Tonning-Olsen, in a phone interview with the Barents Observer.

He says this is “unusually high activity” by the Russian navy.

The press service of the Northern Fleet informs that two tactical groups of navy ships are formed in the North Sea and they “will continue with planned combat training missions as they are crossing the sea.”

As reported by the Barents Observer this weekend, also the Oscar-II class nuclear-powered submarine “Smolensk” was sailing in pair with “Elbrus” and “Nikolay Chiker”.

Warships normally sail without the AIS turn on, but the support vessels can be tracked on MarineTraffic.com. Tuesday evening, the ships where outside Kristiansund, a few days voayge from where the live-shootings is said to take place.

“It is very important both for us and for our allies to have a good situation understanding,” he says and adds that Norwegian Orion aircraft will also be on the wings as the Russian navy group sails north.

Last autumn, during NATO’s large scale exercise Trident Juncture, Russia’s Northern Fleet announced NOTAMs for three areas, one outside the Møre on the west coast of Norway, one area outside Lofoten just north of the Arctic Circle and one area off the coast of Finnmark in the Barents Sea. Actual shootings, however, only took place outside Finnmark where the Northern Fleet’s largest nuclear-powered battle cruiser “Pyotr Velikiy” was one of the participating warships.

Russian navy exercises in the Barents Sea and Arctic waters is normal. What is new after 2018 is live shootings in the Norwegian Sea, waters west and south of North Cape.

Senior Research Fellow with the Norwegian Defence Research Establishment (FFI), Kristian Åtland told the Barents Observer this spring that Moscow, by announcing live-shootings in the Norwegian Sea, may want to send a signal to NATO that Russia is capable of expanding its bastion defence beyond the Barents Sea, conducting sea denial operations in the maritime spaces of northwestern Europe, all the way to the Greenland-Iceland-UK (GIUK) gap.

In April, another group of warships launched two ship-to-air missiles in the Norwegian Sea outside Andøya air base. Also in May, the “Severomorsk” tested its weapons systems in the same area.

Sigurd Tonning-Olsen says it might be likely that also military aircraft from bases on the Kola Peninsula will participate in the announced exercise activities off Northern Norway.

“Previously, we have seen that aircraft teams up with the navy ships when such shootings take place.”

Norway’s Minister of Defense, Frank Bakke-Jensen, says there shouldn’t be any military reasons for Russia to conduct such exercise activities so far west and near Norway.

“Over time we have seen a trend where Russia is becoming increasingly assertive in our neighbourhood. Norway looks at this with concern and will monitor the expected Russian exercise closely,” Bakke-Jensen says in a statement on Tuesday.

Bakke-Jensen is not satisfied with the way the Russian Navy announces its exercise.

“Norway emphasizes predictability and restraint in planning and implementation of national and allied military training and activity. We don’t see Russia taking the same considerations into account.”

On Monday, another group of Northern Fleet warships left port in Severomorsk on the coast of the Barents Sea. Among the ships are the anti-submarine vessel “Vice Admiral Kulakov”, the two landing ships “Aleksandr Otrakovsky” and “Kondopoga”, the tug- and rescue ship “Pamir”, the tanker “Sergey Osipov” and the navy icebreaker “Ilya Muromets”.

The six ships will take part in a voyage sailing north east, along Russia’s Northern Sea Route, the navy’s press service informs. Armoured amphibious vehicles and a marine corps from the Arctic motorized rifle brigade in Pechenga are on board the two landing ships, as one of the missions will be to exercise to protect a industry facility.

The voyage will last for two months and includes the Arctic archipelagos of Fran Josef Land, Novaya Zemlya, the Taymyr Peninsula and Severnaya Zemlya. All are areas where Russia over the last years have re-armed and modernized old Soviet Cold War military bases.

“One of the main objectives of the mission is to ensure the security of Russia’s economic activity in the Arctic,” another Navy press statement reads.