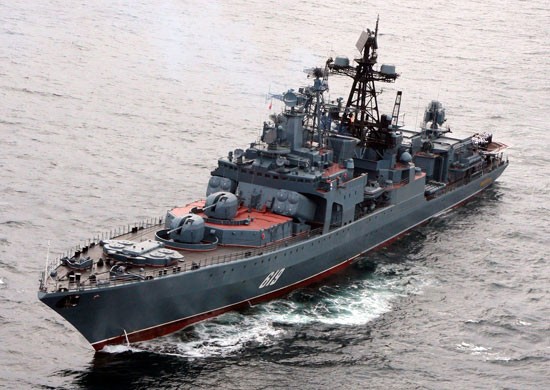 Northern Fleet warship «Severomorsk» tested its weapons systems outside the coast of northern Norway.
Read in Russian | Читать по-русски
By

The Russian navy is expanding its area for live shootings in the north. Traditionally, such drills have taken place outside the Kola Peninsula in the Russian sector of the Barents Sea. It therefore came as a surprise when the two large warships «Pyotr Velikiy» and «Marshal Ustinov» in mid-April conducted missile shootings north of the Lofoten archipelago.

Last month’s shootings raised questions about such unusual behavior was a one-time-event, or marking the start of a new «normal» for the Northern Fleet exercising west and southwest of the North Cape.

Senior Research Fellow Kristian Åtland with the Norwegian Defence Research Institute (FFI) is expert on Russian military developments in the north. He says naval vessels en route to- and from assignments use to run various drills while in transit.

«Such drills may include the use, or simulated use, of the vessels’ anti-air, anti-surface and anti-submarine systems.»

Åtland, however, is surprised by the recent expansion of the Northern Fleet’s live-shooting activity.

«Live-fire missile drills have traditionally taken place in the Barents Sea, but the activity now seems to be expanding into the Norwegian Sea, as indicated by recent NOTAMs and missile launches in international waters off the Norwegian west coast,» he says.

«The recent pattern of Russian activities in the Norwegian Sea may be seen as way of signaling that Russia has long-term security interests in this area.»

Additional to shooting with its near-defence artillery systems like 100-mm AK-100 and AK-630, the Northern Fleet claims in a press statement to have launched Kinzhal anti-air missile (NATO name SA-N-9 Gauntlet).

The Norwegian military has monitored the Russian navy vessel all along its voyage outside Norway’s coast.

«We routinely monitored the ship. «Severomorsk» conducted artillery shooting when sailing the waters outside Nordland and Troms,» Moen says in a phone interview with the Barents Observer.

Press service of the Northern Fleet on Thursday informs that «Severomorsk» is now sailing back into the Barents Sea after conducting training on air defense in the northern part of the Barents Sea. Within a few days the warship will make port call to its home base Severomorsk, of which it is named after.

«Severomorsk» has been on a long-mission voyage since last year, sailing the Mediterranean Indian Ocean and the Atlantic, visiting ports in India, Tanzania, Algeria, South-Africa and Cyprus.