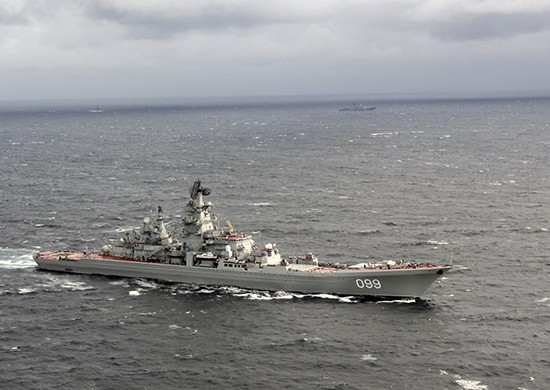 On Saturday, “Pyotr Velikiy” sailed out to the Barents Sea to exercise together with the air force and air defense.
Read in Russian | Читать по-русски
By

The battle cruiser, the largest of all warships in the Russian navy, has left her homebase Severomorsk north of Murmansk, Russia’s Defense Ministry reports on Saturday evening.

The press-service says nothing about where in the Barents Sea the exercise will take place. As a rule, the Murmansk division of the Administration of Sea Ports of the Western Arctic announces training areas. This as warnings to civilian ships about where to stay away.

Also, Russian authorities issues Notice to Airman (NOTAM) for areas where rocket or missile shootings will take place that could cause danger to plane and helicopter traffic.

Currently, the only warning made public by the Sea Ports Administration is outside the Norwegian Barents Sea coast, about 40 km north of Berlevåg and Mehamn in Finnmark. This warning reads “Rockets and Artillery shootings” and are the same as reported about by the Barents Observer earlier this week when Norwegian aviation authorities received the warning about rocket test firings in this area from Russia valied for the period November 6th to 9th at daytime from 5 am to 7 am.

This week, Russian military forces have more than usual active in the waters and airspace around Norway where NATO currently has its large-scale exercise Trident Juncture.

Two corvettes from the Baltic Fleet have sailed through the NATO exercise area en route to the Kola Peninsula. Also, long-ranged strategic bombers have been on missions along the coast of Norway four times over the last week, and a Russian military surveillance aircraft Tu-142 was flying just by “USS Mount Whitney” – the flagship of the Sixth Fleet – which serves as the command warship for Trident Juncture. Military.com reported the flyover on Saturday.

“Pyotr Velikiy” [Peter the Great] will during the exercise now starting use its Ka-27 helicopters for anti-submarine search, the Northern Fleet’s press service informs.