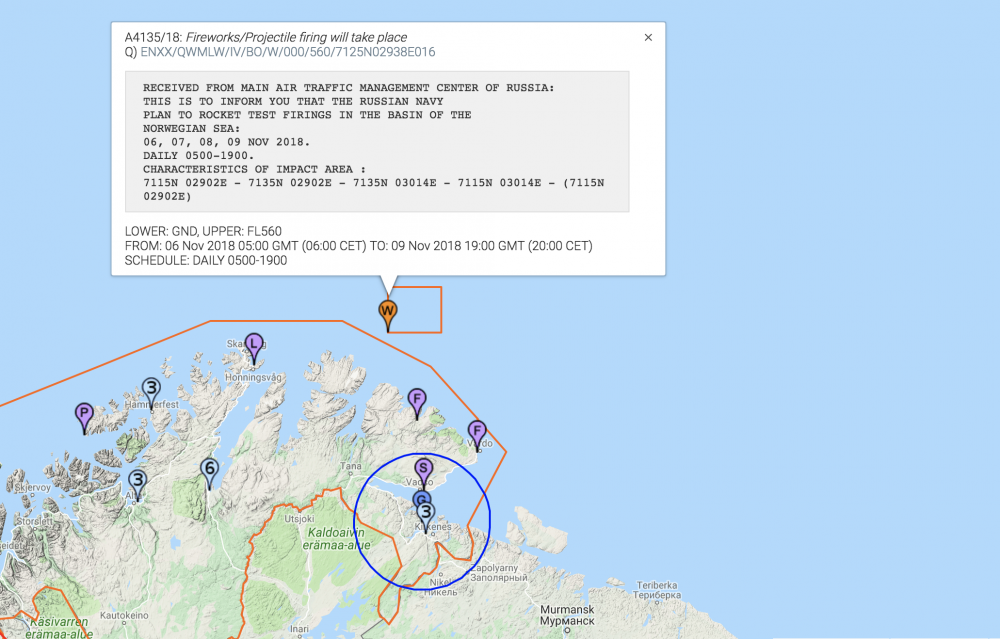 The area of rocket test firings is only about 40 kilometers north of Gamvik and Berlevåg on Norway’s Barents Sea coast.
Read in Russian | Читать по-русски
By

Norway’s aviation authorities has received a warning from Russia’s air traffic management center about upcoming rocket firings in the period from November 6th to 9th at daytime from 5 am to 7 pm.

A Notice to Airmen (NOTAM) is issued for the area in the Barents Sea. It was newspaper VG that first reported about Russia’s planned shootings.

No information is said about what kind of rockets are to be tested or from which navy vessels.

The square area is located 20 to 40 nautical miles north of Gamvik and Berlevåg, two fishing villages on Norway’s northernmost mainland. If clear skies, Russia’s naval shootings could be visible from shore. The territorial maritime boundaries is 12 nm from the baseline. These waters are important fishing ground for the coastal fisheries of Finnmark.

Russia’s rocket shooting is the second to take place close to Norway as NATO’s biggest military exercise in many years is going on in the southern and central part of Norway. Last week, the Barents Observer reported about the two corvettes «Soobrazitelny» and «Stoiky» that set out from Baltiisky, the naval base in the Baltic Sea. They are accompanied by tug «Konetsky» and 5000 tons oil tanker «Kola». The navy group will test missiles in the Norwegian Sea inside the same maritime area as the NATO warships are sailing. Russia’s missile shootings is announced to be from November 1st to 3rd.

The Norwegian newspaper Klassekampen could also inform that the Northern Fleet’s newest frigate «Admiral Gorshkov» will join the vessels from the Baltic Fleet for the voyages outside Norway.

In the period from 25th October to 7th November, more than 50,000 soldiers, 250 aircrafts and 65 vessels from 31 countries will engage in wide-ranging training along the coast of Norway, including the surrounding areas of the North Atlantic and the Baltic Sea, as well as Iceland and the airspace of Finland and Sweden.

Press spokesman Lt. Col. Ivar Moen with the Joint Head Quarters writes in an e-mail to the Barents Observer that «exercise Trident Juncture will continue as planned.»

NATO Secretary General, Jens Stoltenberg, said at a press-conference on Tuesday that Triden Juncture is an exercise is of defensive and transparent nature.

We train to send a clear message to our own nations, and to anyone who might want to challenge us: NATO is ready and NATO is able to protect all Allies against any threat, Jens Stoltenberg said.»

A Russian transcript of Stoltenberg’s remarks is posted at NATO’s portal.