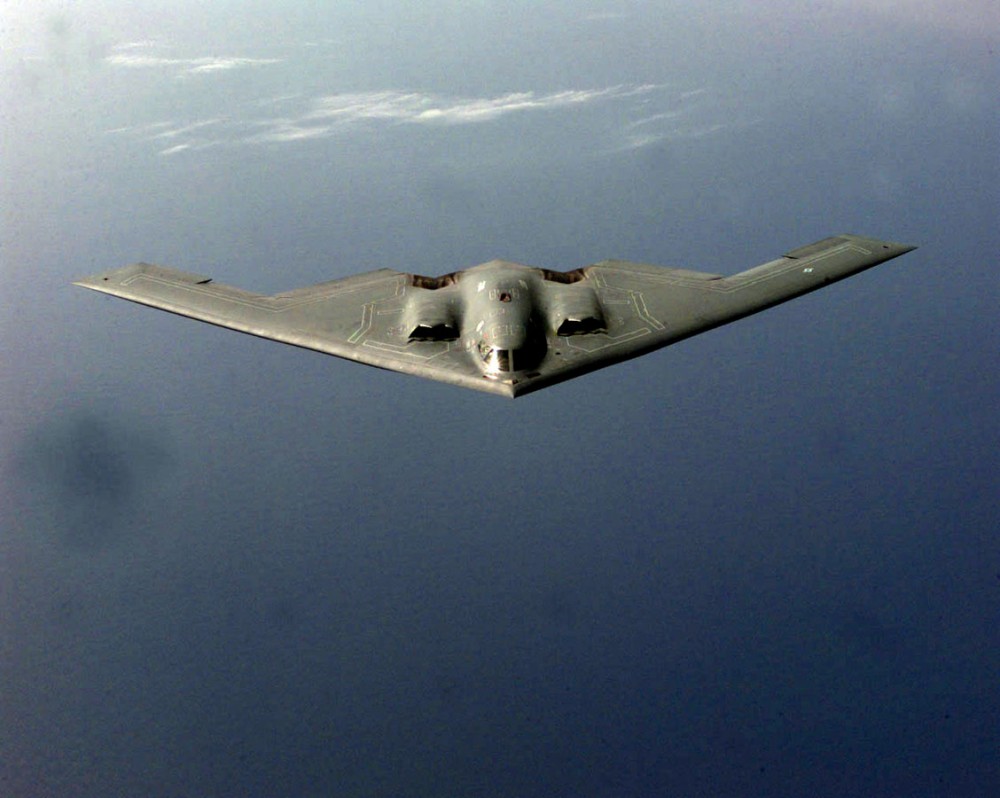 The B-2 Spirit is a multi-role bomber capable of delivering both conventional and nuclear munitions. (U.S. Air Force photo by Staff Sgt. Ken Bergmann)

The flight was the farthest north the nuclear capable U.S. bomber had flown in the European air space.
Read in Russian | Читать по-русски
By

Russia is frequently arguing that NATO comes closer to its borders. With the B-2 flying north of the Arctic Circle in the Norwegian Sea the night between September 4th and 5th, that argument will hardly be less true.

The sortie above the Arctic Circle was accompanied by a British KC-135 tanker and included a night refueling, the U.S. Air Force in Europe & Air Force Africa informs in a tweet on Friday.

A #B2 Spirit stealth bomber from @Whiteman_AFB refuels by night over the Arctic Circle during a #BomberTaskForceEurope exercise. This was the aircraft’s first mission this far north in the European theater. #Airpower @usairforce @US_Stratcom @AFGlobalStrike @DeptofDefense pic.twitter.com/IZUer7v9MT

Press spokesman with the Norwegian Armed Forces, Major Brynjar Stordal, says to the Barents Observer that the fight was not inside Norwegian Air Space.

Stordal says no Norwegian aircraft participated in the sortie.

There are currently two B-2 Spirit bombers deployed to the Royal Air Force base in Fairford, England . Earlier this week, the two bombers made a landing with refueling at Keflavik airport on Iceland.

According to a press release, the U.S. Air Force says «The use of strategic bombers in Iceland helps exercise Naval Air Station Keflavik as a forward location for the B-2, ensuring that it is engaged, postured and ready with credible force to assure, deter and defend the U.S. and its allies in an increasingly complex security environment.»

In March last year, a U.S. B-52 Stratofortresses strategic bomber flew in formation with three Norwegian F-16 fighter jets during a training mission over international waters in the Norwegian Sea, the Barents Observer reported.

While the B-52 planes are 50 years old, the B-2 is the most modern and newest strategic bomber, first used in combat dropping conventional bombs in the 1999 Kosovo war.

With its special wing formation, the B-2’s low observable characteristics enable it to fly undetected, in «stealth», and penetrate through anti-aircraft defenses systems.

Russia has over the last year deployed a wide-range of new anti-aircraft missile defense systems in the Arctic, including the Tor-M2DT vehicles in the Pechenga Valley close to the Norwegian border in late August.

The Tor-M2DT is specially designed for Arctic operations and the move came shortly after the collapse of the more than 30 years old Intermediate-Range Nuclear Forces (INF) Treaty, which banned the United States and Russia from fielding land-base missiles capable of carrying nuclear warheads with a range of between 500 and 5,500 kilometers.

Tor-M2DT was tested for the first time in the Arctic in July this year, at the southern island of Novaya Zemlya archipelago.

Over the last year, and latest in August, the Russian navy has trained expansion of its bastion defence beyond the Barents Sea. The bastion defence is aimed at conducting sea denial operations in the maritime space of northwestern Europe all the way from the Kola Peninsula to the so-called Greenland-Iceland-UK (GIUK) gap.

The aim is to protect the strategic missile submarines based in Gadzhiyevo on the Kola Peninsula and those patrolling in the Barents Sea and Arctic Ocean.