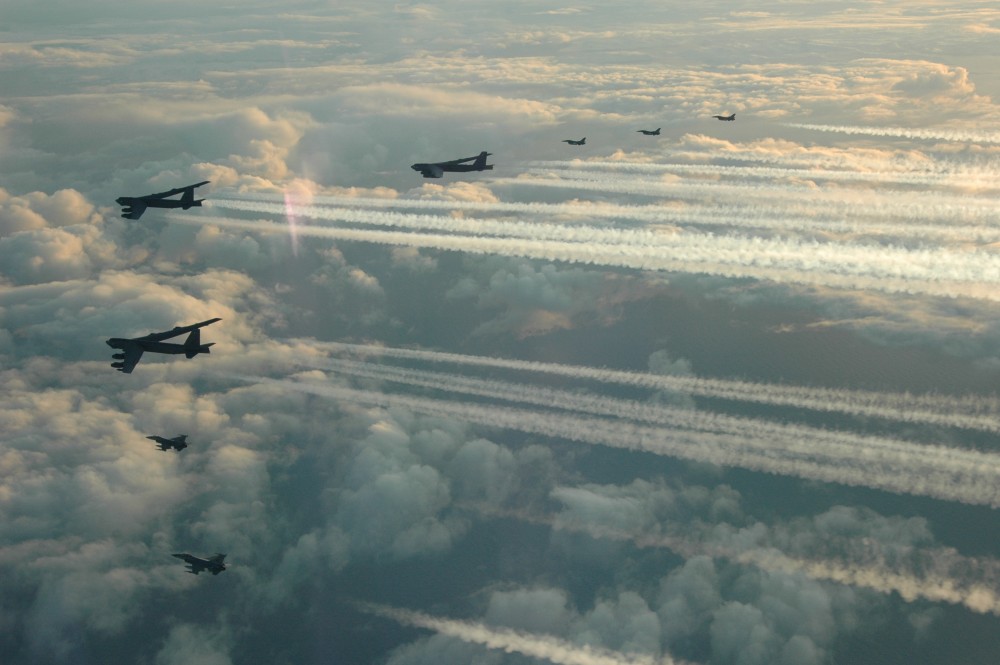 The skies above the Barents Sea were for hours literally crowded with NATO planes.

For the third time this autumn, U.S. strategic bombers were flying north of the Arctic Circle in Europe. This time, however, the planes went much deeper into international airspace near facilities of high importance for Russia’s military.

Operating from Fairford air base in Great Britain, the three B-52H Stratofortress “returned today from flights in the Barents Sea region of the Arctic Circle,” a short press release from U.S. Air Forces in Europe reads.

“For operational security reasons, we are not able to provide more specific details on the location of the mission flown,” she writes in a e-mail to the Barents Observer.

Several Russia web sites, like Operativnaya and Avia.Pro, though, write about the routing of the flights.

The planes were flying together up north along the coast of Norway before taking an eastern route into the Barents Sea from north of North Cape.

Somewhere north of Finnmark the planes spread into three different directions; one stayed in the western Barents Sea, one flew northeast to the coast of Novaya Zemlya and one flew along the coast of the Kola Peninsula towards Kap Kanin at the entrance to the White Sea.

Russia’s ballistic missile subs of the Delta-IV and Borei-class have homeport in Gadzhiyevo and other advanced nuclear-powered submarines are based in the same area. The strategic submarines (SSBN) are patroling the eastern Barents Sea and Arctic Ocean.

Last week, a Bulava—missile was test-launched from the newest Borei-class from submerged position in the White Sea.

Five Norwegian F-16 fighter jets were flying together with the three B-52s along the coast of Norway and into the western sector of the Barents Sea.

Spokesperson Major Brynjar Stordal with the Norwegian Armed Forces confirms to the Barents Observer that the F-16s changed course and headed in different directions.

“They did not fly together at all time,” he says.

The Norwegian fighter jets, however, did not fly into the eastern part of the Barents Sea.

31° East is the same longitude as Vardø, the easternmost town on the Norwegian Barents Sea coast.

While the Norwegian F-16s did not fly further east along the coast of the Kola Peninsula or northeast in the Barents Sea, the American bombers seem to have continued.

The site EurAsia Daily writes that B-52s were within a range of 100 kilometers from both the bases of the Northern Fleet and the central training ground of the Defense Ministry at Novaya Zemlya.

Also the twitter account Mil Radar, known for reliable tracking of military aircraft in northern Europe, has plotted the B-52s to be flying a route across the Barents Sea to the western coast of Novaya Zemlya.

Additional to the fighter jets and long-range bombers, U.S. Navy P8 maritime patrol aircraft, KS-135 tanker and RC-135 surveillance plane were flying over the Barents Sea at the time.

“The flight included integration and interoperability with the Norwegian Air Force, as well as maritime training with U.S. Navy P8s,” the press release from U.S. Air Force in Europe reads.

“Bomber Task Force 20-1 is part of a routine forward deployment of bomber aircraft in the European theater that demonstrates the U.S. commitment to the collective defense of the NATO alliance, as well as the visible demonstration of the U.S. capability of extended deterrence.”

Russian fighter jets did not intercept the American bombers during the mission.

“We are not aware of any Russian military intercepts on this mission,” says 1st Lt. with the U.S. Air Force, Madeline Krpan.

Without mentioning any intercepts for the flights over the Barents Sea this Wednesday, Russian military informs that it scrambled 11 times during the course of the week in connection with the appearance of foreign aircraft near Russian borders, Interfax reports with reference to the military newspaper Krasnaya Zvezda on Friday.

Wednesday’s flight mission is according to open sources the third time this autumn U.S. strategic bombers are flying into the Arctic near Norway.

In early September, a B2 Spirit stealth bomber crossed the Arctic Circle. “This was the aircraft’s first mission this far north in the European theater,” the Barents Observer reported with reference to U.S. Air Force Europe.

On October 30th, a B-52 was flying off the coast of Troms, northern Norway, in a joint drill with Norwegian F-16s, the Armed Forces reported.

“To preserve operational security, we will not confirm or discuss details of future operations.”

Russia resumed flights with long-range strategic bombers, like the Tu-95 and Tu-160, around the coast of Norway in 2007. Norwegian F-16s on alert for NATO at Bodø air base are regularly scrambled to identify the Russian planes flying out to international airspace from the Kola Peninsula and over the Barents-, Norwegian- and North Seas.