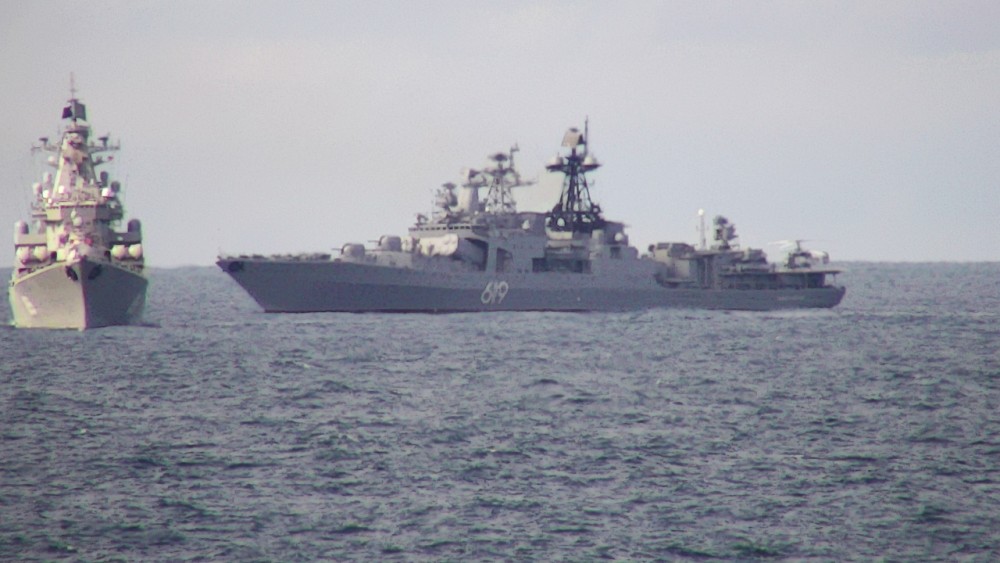 Russia wants to show that it can prevent NATO from operating in the North Atlantic, the Norwegian Chief of Defense makes clear.
Read in Russian | Читать по-русски
By

The Russian exercise in the Norwegian Sea has been in the making for a while and four NOTAM warnings were issued early last week. Still, the magnitude of the drills appears to catch the Norwegians off guard.

In an interview with broadcaster NRK, Norway’s Defense Chief Haakon Bruun-Hansen says the objective of the exercise is to block NATO’s access to the Baltic Sea, North Sea and the Norwegian Sea.

«This is an exercise where Russia seeks to protect its territory and its interests by deploying highly capable ships, submarines and aircraft with the purpose of preventing NATO of operating in the area,» Bruun-Hansen says.

According to the military leader, the situation poses a «national challenge.»

The Russian flotilla is headed by the «Severomorsk», a 163 meter long destroyer. In the area is also the «Admiral Gorshkov», the new frigate that has at sea for several months as part of a major intercontinental voyage.

In the drills, the multi-purpose support ships «Elbrus» and «Nikolay Chiker» represented the enemy side that was hunted down by the opposing ships, the Northern Fleet informs. Included is also anti-submarine and strategic aircraft, a press release reads.

According to Chief of Defense Bruun-Hansen, the Russians are sending a signal to the USA and NATO.

«This is a picture of great power rivalry that we have seen before. Norway is hardly the target, but we are geographically situated in the wrong area and could be drawn into a potential confrontation between the sides.»

«Our challenge is that there is little we as a state can do about it,» Bruun-Hansen says. He makes clear, however, that Norway should take stabilizing measures and seek to prevent that the rivalry results in a confrontation line in the area.

Not happy with Russia

It is not the first time that Russian forces have engaged in training off the Norwegian coast. Now, however, it is far more comprehensive that earlier.

Norwegian Defense Minister Frank Bakke-Jensen is not happy with the development.

«Norway is emphasizing predictability and restraint in planning and organization of national and allied exercises and training [but[ we can not see that Russia is taking the same concerns,» he says in a statement made last week.

«We do not see any clear military reasons why the Russian training is carried out exactly in these waters so far west and near Norway,» Bakke-Jensen says.

«Norway is not happy you the development and we will follows the training activity closely,» he underlines.

The increasingly tense situation with nearby Russia is leading to growth in Norwegian defense budgets.

Defense Chief Bruun-Hansen was in April this year requested by the Storting (parliament) to provide input for a new long-term military plan for the country.

«The military council will recommend a strengthening of the Armed Forces that will make us able to meet our own plans for national defense and support from NATO,» he said in a comment.

«We see that there are certain issues that are significantly different in 2019 compared with the previous military council in 2015,» he adds.

In addition to the 30 Russian vessels now engaging in the Norwegian Sea, the Russian Navy is this week hectically involved in training also several more places.

Two groups of mine sweepers with a total of six vessels on Wednesday conducted training in the Barents Sea, and in the northeastern corner of the country a fleet of ten vessels and more than 1,000 soldiers are engaging in drills outside Kamchatka.

In addition, a powerful flotilla headed by Vice Admiral Oleg Golubev is on a long-range Arctic voyage that will includes visits to several of the country’s new and upgraded Arctic bases. On Wednesday, the group of ships arrived in Dudinka, the port town on the Yenisey River. Included in the group are big anti-submarine vessel «Vice Admiral Kulakov», landing ships «Aleksandr Otrakovsky», «Kondopoga» and icebreaker «Ilya Muromets».

The Northern Fleet has organized similar long-range Arctic missions for the past several years.