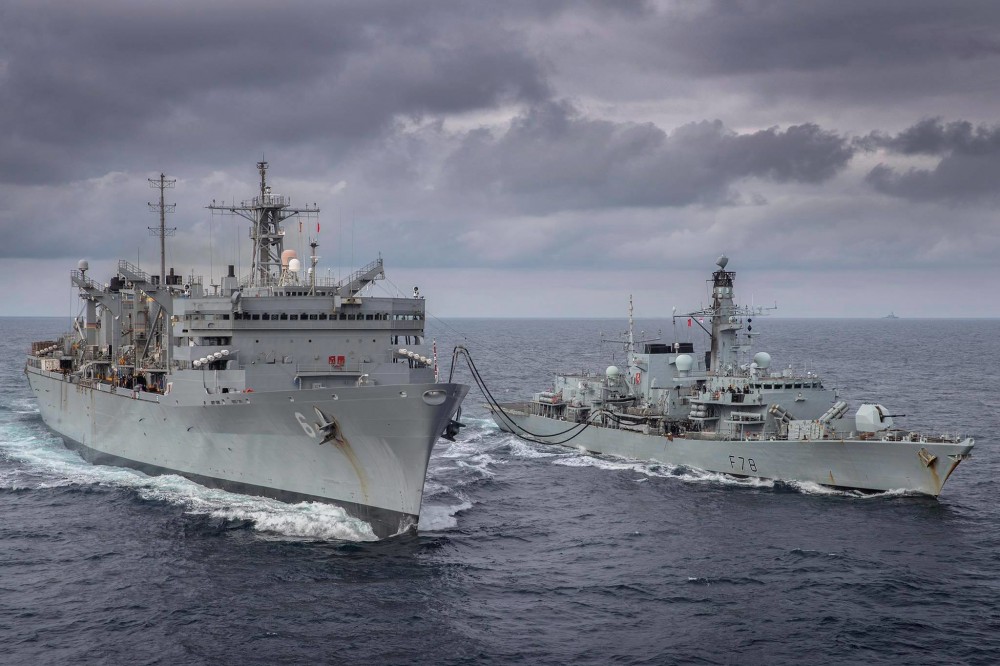 Without any Norwegians participating, the group of one British and four U.S. warships sailed into the Barents Sea for "maritime security operations." The U.S. Navy has not operated in the Barents Sea with surface vessels since the mid-1980’s. Russia's Northern Fleet assets have begun tracking NATO’s surface action group.
Read in Russian | Читать по-русски
By

The two hashtags #PowerForPeace and #OpenForBusiness are added to the tweet posted by the U.S. 6th Fleet as the navy group sailed north of North Cape eastbound into the Barents Sea Monday morning.

“In these challenging times, it is more important than ever that we maintain our steady drumbeat of operations across the European theater, while taking prudent measures to protect the health of our force,” said Vice Adm. Lisa Franchetti, commander, U.S. 6th Fleet in a statement.

“We remain committed to promoting regional security and stability, while building trust and reinforcing a foundation of Arctic readiness,” she added.

U.S. Navy surface ships have not operated in the Barents since the mid-1980’s, according to the statement.

On Friday, the navy ships conducted an anti-submarine exercise together with an American P8 maritime surveillance aircraft and a nuclear-powered submarine.

The May 1st exercise that took place in the northern part of the Norwegian Sea, in international waters west of Tromsø, happened without any Norwegians involved, the Joint Headquarters near Bodø told the Barents Observer.

During the weekend, one more U.S. destroyer, the “USS Roosevelt”, has joined the navy group that from before consisted of the two destroyers “USS Donald Cook” and “USS Porter” as well as the combat support ship “USNS Supply” and the British frigate “HMS Kent”.

Russia’s Ministry of Defense published a short note at noon on Monday, stating the Northern Fleet “has started to monitor the actions of the NATO naval strike group.” According to ministry, the navy group entered the Barents Sea at 7 am Moscow time (8 am CET).

Russia’s largest fleet, the Northern Fleet, is based on the coast of the Kola Peninsula and has access to the North Atlantic via the Barents Sea for its surface ships and submarines.

One of the three Arleigh Burke-class guided-missile destroyers in the navy group, the “USS Donald Cook” is likely provoking special attention by the Russian officials.

In 2012, the ship was upgraded to carry RIM-161 Standard Missile 3 (SM-3) capability in order to function as part of the Aegis Ballistic Missile Defense System, according to Wikipedia. The onboard radar plays an important role in early detecting potential missiles.

Professor Rasmus Gjedssø Bertelsen with the Department of Social Sciences with UiT – The Arctic University of Norway says it is maybe wise of Norway to abstain. He argues there are some obvious questions to be asked now as the navy ships enter the northern waters off the coast of Norway.

“Do the U.S. Navy and Royal Navy exercises in the Barents- and Norwegian Seas defend trans-Atlantic sea lanes or threaten the Russian Bastion defense and its nuclear deterrence and therefore strategic stability,” professor Gjedssø Bertelsen asks.

He says the United States should consider the effects of missile defense assets in the region on strategic stability carefully.

From Oslo, Defense Minister Frank Bakke-Jensen sees no conflict of interests by the British, U.S. navy group sailing north. To the Barents Observer, the minister says such cooperation among NATO countries strengthens the collective defense.

«Norway welcomes more allied presence in our neighborhood. The United States contributes to NATO’s collective defense through more presence and training in Europe. The ongoing maritime activity is a sign of rivalry between the great powers,» Bakke-Jensen says.

He says that both the Americans and the British have communicated openly with the Russians about the voyage is underlining ‘freedom of navigation’ which also applies in the north.

«We want Norwegian forces to participate in this type of activities when it takes place outside Norway,» the Defense Minister states, but adds «this time it was not prioritized.»

Bakke-Jensen has previously underlined the importance of Norway’s military presence in the north.

“If Norway does not have a regular and predictable presence in the North, space could open for allies or others to fill,“ the Norwegian Defense Ministry said as quoted by the Barents Observer. He continued:

“Such a development could have negative consequences for stability and Norway might lose influence on the security development in its own neighborhood.”

The aircraft took off from Olenegorsk airbase on the Kola Peninsula and the missile hit the target at the Pemboy shooting range in the Komi Republic.

Kh-47M2 Kinzhal is one of the six new strategic nuclear weapons under development in Russia.

In principle, the Kinzhal missile is an air-carried version of the Iskander land-based short-range ballistic missile. That said, placing such missile on an aircraft gives it a more dangerous strategic position.

First, the missile could be launched from unpredictable locations because an aircraft moves much faster than a land-based vehicle. Secondly, an aircraft adds extra range before the missile itself is launched.

This article was updated at 17.47 with comments from Norway’s Minister of Defense.