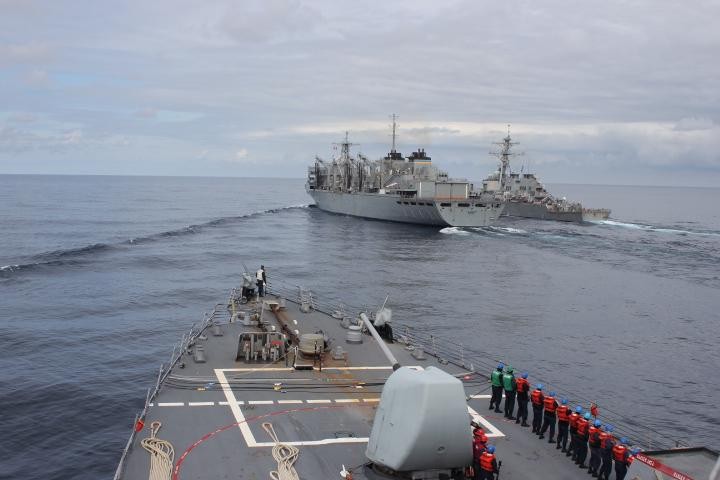 Norway was not participating when the NATO allies tested anti-submarine warfare capabilities in the Norwegian Sea on May 1st.
Read in Russian | Читать по-русски
By

U.S. wants a more visible military footprint in the Arctic. The anti-submarine exercise off the coast of northern Norway on Friday comes amid increased Russian submarine sailings into the North Atlantic.

Russia has in the course of the last two years exercised its bastion defense concept with navy vessels in the Norwegian Sea on several occasions. In case of global escalating military tensions, ensuring areal denial in this part of the North Atlantic would be crucial for protecting Russia’s ballistic missile submarines in the Barents Sea.

The United States Navy says in a statement it will work with European partners “to ensure an open Arctic by continuing freedom of navigation and overflight through the region, as well conducting land, air, and sea operations required for deterrence, presence, and Arctic security.“

Four warships, a P8-A Poseidon maritime reconnaissance plane, and one nuclear-powered submarine worked together in the Norwegian Sea during the May 1st exercise.

The U.S. Navy is vague in geolocating the exercise more than saying it took place in the Norwegian Sea.

“Due to operational security, we do not discuss the specific locations of our operational units,” Lieutenant commander Matthew Comer with the U.S. 6th Fleet writes in an email to the Barents Observer when asked to detail.

Norway, a country promoting itself as «NATO in the north», however, was not participating with neither ships, planes or personnel at the U.S. and British exercise.

“The exercise took place in international waters. We didn’t participate this time,” said spokesperson for the Norwegian Armed Forces, Major Brynjar Stordal, in a phone interview with the Barents Observer.

“If Norway does not have a regular and predictable presence in the North, a space could open for allies or others to fill,“ the Norwegian Defense Ministry said as quoted by the Barents Observer. He continued:

“Such a development could have negative consequences for stability and Norway might lose influence on the security development in its own neighborhood.”

Russia has made no secret it dislikes military operations by other NATO-members than Norway in the waters that would be covered by a potential Bastion Defense move by the Northern Fleet.

That includes the northernmost part of the Norwegian Sea and the Barents Sea region.

Norway’s long-term military plan, covering the period 2020 to 2024, calls for a “significant strengthening” of the military.

Approximately 1,200 sailors participated in the bilateral U.S., British anti-submarine exercise off the coast of northern Norway.

The British navy ship was the frigate HMS Kent.

U.S. navy does not name the participating nuclear-powered submarine.

“We are working with our partners to enhance our combined capabilities as we conduct maritime security operations and training in the Arctic region,” said Franchetti.

“Our ships must be prepared to operate across all mission sets, even in the most unforgiving environments.  This is especially critical in the Arctic, where the austere weather environment demands constant vigilance and practice,” the commander said.

Two days ago, on April 29th, two of the Northern Fleet’s maritime Tu-142 reconnaissance and anti-submarine warfare planes were flying over the Barents, Norwegian and North Seas, the Barents Observer reported.

The long-range aircraft were followed by Norwegian and British fighter jets. This was the fourth time in two months that Russian anti-submarine aircraft were flying south along the coast of Norway.