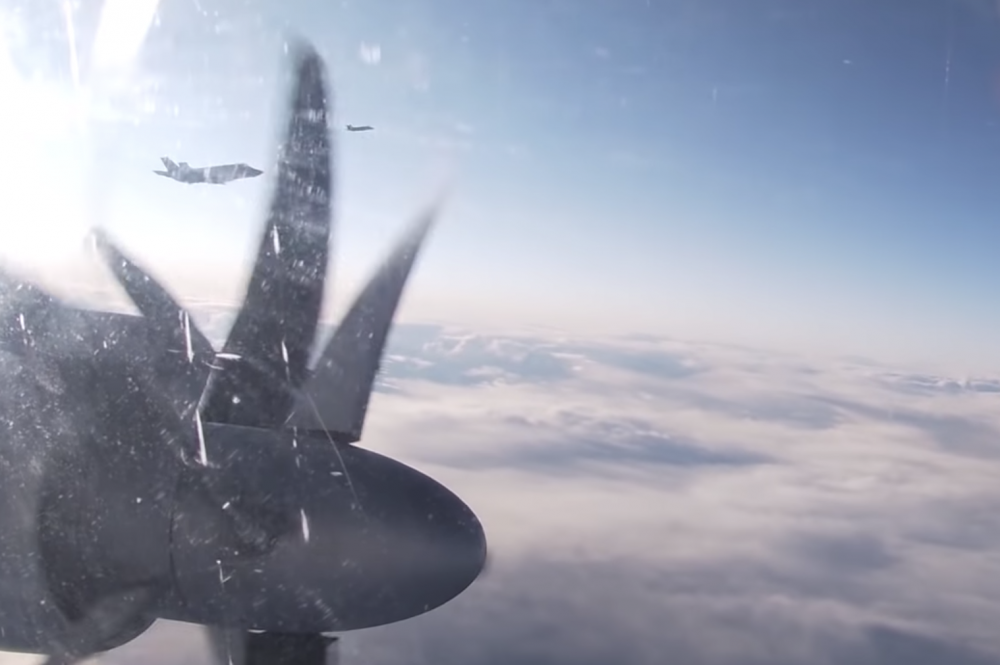 An exciting moment for the video-filmer in the Russian Tu-142 that in early March 2020 got two of Norway's new F-35 fighter jets approaching wing-by-wing. Photo: mil.ru

From Bodø are station, part of NATO’ Quick Reaction Alert (QRA), two Norwegian F-16s were scrambled to identify the planes in international airspace north of the Arctic Circle.

As the Russian planes continued south, Royal Air Force took over the watch of the planes that operated around the North Sea area for some time, the British air force informs in a tweet.

Why were they intercepted?

All aircraft flying internationally have a transponder code allowing other planes and controllers to identify the route and height they fly.

The Royal Air Force (RAF) in Great Britain says this is one of the reasons why British fighter jets have to be intercepted. The Russians rarely broadcast their identity code, RAF says.

The air space over the North Sea area is normally very busy with thousands of civilian planes flying to and from British airports, as well as to and from other European countries. Most of the transatlantic flights to and from northern Europe are also crossing over this airspace en route to North-America.

The RAF unit informs civilian air operation centers about the paths of the Russian military aircraft, making it possible for the air traffic controllers to re-route civilian passenger planes and by that avoid dangerous situations.

Additional to the British Typhoon, the Norwegian F-16s and F-35s, a NATO operated Airborne early warning and control aircraft (AEW) E-3A AWACS based out of Geilenkirchen in Germany was flying west of the Shetland islands at the time the Russian aircraft came in from the north.

The Norwegian F-35s were following the Tu-142s en route north towards the Barents Sea.

Russia’s ministry of defense hasn’t announced the reason for the mission to the North Sea area, but British media last week reported the country’s navy being involved in a cat-and-mouse chase with Russian submarines in the North Atlantic.

According to the report, Russia’s latest multi-purpose submarine, the «Kazan» is currently in the North Atlantic together with several Akula-class subs from the Northern Fleet.

The «Kazan» is the second of the Yasen-class 4th generation subs and is still not officially transferred to the Northern Fleet, but is sailing sea trials when testing its weaponry and navigation capabilities.

The Royal Navy is said to have Astute-class subs supported by Trafalgar vessel sub hunters tasked to find and shadow the Russian submarines.

Spokesperson for the Norwegian Armed Forces, Lt. Col. Ivar Moen, is unwilling to detail what his operational headquarters knows, but he confirms to the Barents Observer that Norway «together with our allies, has a good situational awareness of the military activities in the Northern areas.»

Over the last two months, Tu-142s have several times been flying all south to the North Sea area, a new pattern for the Northern Fleet’s anti-submarine aircraft that normally fly over the Barents Sea region.

It can also drop sonobuoys to detect and track submarines, similar to Norwegian P3 Orion flying out of Andøya air base inside the Arctic Circle.

Bombers in the air earlier this week

The flight of the North Sea on Wednesday came just hours after a pair of Russian Tu-160 long-range bombers were flying a mission over the Baltic Sea, the Ministry of Defense in Moscow informs. Finnish, Danish, Polish and Swedish fighter jets were following the bombers on different parts of the flight.

Earlier this week, a pair of Russian Tu-22M3 bombers from the Olenya airbase on the Kola Peninsula were on a mission outside the coast of northern Norway.

Norwegian F-16s were following the bombers on part of the route that lasted for four hours over the Barents- and Norwegian Seas, the Defense Ministry informs.