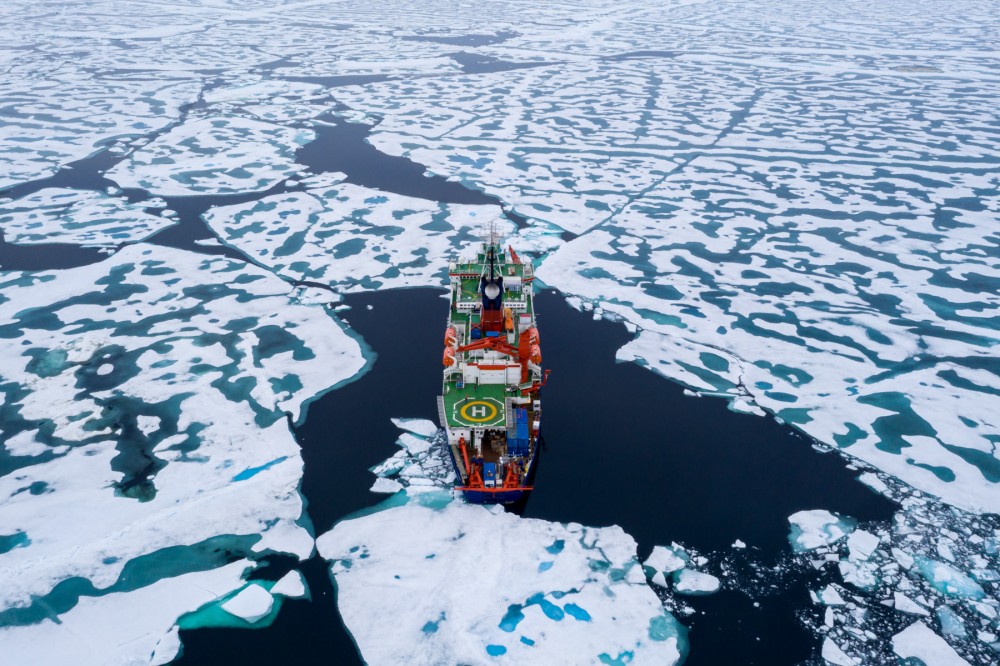 The sea ice is surprisingly weak, has lots of melt ponds, and the expedition ship Polarstern was able to easily break through. Photo: Steffen Graupnerice / MOSAiC

Loose and weak ice with lots of melt ponds, partly open water, and no signs of multiyear ice. The powerful photos from the MOSAiC expedition reaching the North Pole on August 19 show the dramatic impact of climate changes.
Read in Russian | Читать по-русски
By

Few photos are better proof of the climate crisis than those taken by the members of the MOSAiC expedition over the last few days. The Barents Observer has obtained permission to repost some of them, showing the current ice-cap on the top of the world.

The photos clearly underline how several recent climate studies, predicting ice-free Arctic summers by 2035, is not a theoretical scenario but rather an unavoidable fact.

The expedition ship Polarstern sailed from the northern Fram Strait between Greenland and Svalbard to the North Pole this week.

“I’m very surprised to see how soft and easy to traverse the ice up to 88° North is this year, having thawed to the point of being thin and porous,” said Captain Thomas Wunderlich.

“Even after passing 88° North we mostly maintained a speed of 5-7 knots; I’ve never seen that so far north,” the Polarstern captain said.

He added: “The current situation is historic.”

The MOSAiC expedition is the largest science voyage into polar waters in history. Sailing out of Tromsø in September 2019, the German icebreaker has so far nearly spent one year drifting through the Arctic Ocean. Last fall across the Barents Sea to north of Novaya Zemlya and Severnaya Zemlya before sailing into the ice and drifting northwest during the polar night season.

Hundreds of researchers from 20 countries are involved gathering data aimed at getting a much better understanding of the Arctic climate impact.

Since sea ice drifts from north of Siberia across the Arctic Ocean to the Greenland, Canadian side, multiple year ice use to pack north of Greenland.

“Normally it’s wise to avoid the region north of Greenland, because it’s home to the thicker and older ice, and virtually impassable,” Polarstern captain Wunderlich explained.

A study published last week in the journal Nature Climate Change could tell the serious negative path for Arctic summer sea ice. The study points to exactly what can be seen on the photos from this August’s MOSAiC voyage: The shallow pools of water form on the surface of the ice, so-called melt ponds, causes more sunlight to be absorbed instead of being reflected back into space as is the case with white-snow covered ice, the scientists said.

Meanwhile, Polarstern continues the research expedition towards east in direction of Siberia and plans for a stop in the ice at about 88° North.

“Depending on the ice conditions, however, we’ll also start looking for a suitable floe in the vicinity of the North Pole, so that we can start working on the ice as soon as possible,” Markus Rex explained.

The researchers’ priorities now will be the beginning of freezing and the early phase of ice formation as the Arctic autumn and winter season starts.

The disturbing photos by this year’s MOSAiC expedition follows an escalating trend seen in the last few years.

The first surface vessel to reach the North Pole was the Soviet Union’s nuclear-powered icebreaker Arktika on August 17, 1977. On the 40 years anniversary of the voyage, in August 2017, the icebreaker 50 let pobedy sailed the same route from Murmansk to the North Pole in just 79 hours as reported by The Barents Observer at the time.

The voyage with Arktika took 176 hours, more than twice the time. Both icebreakers were powered by the same type of twin nuclear reactors.