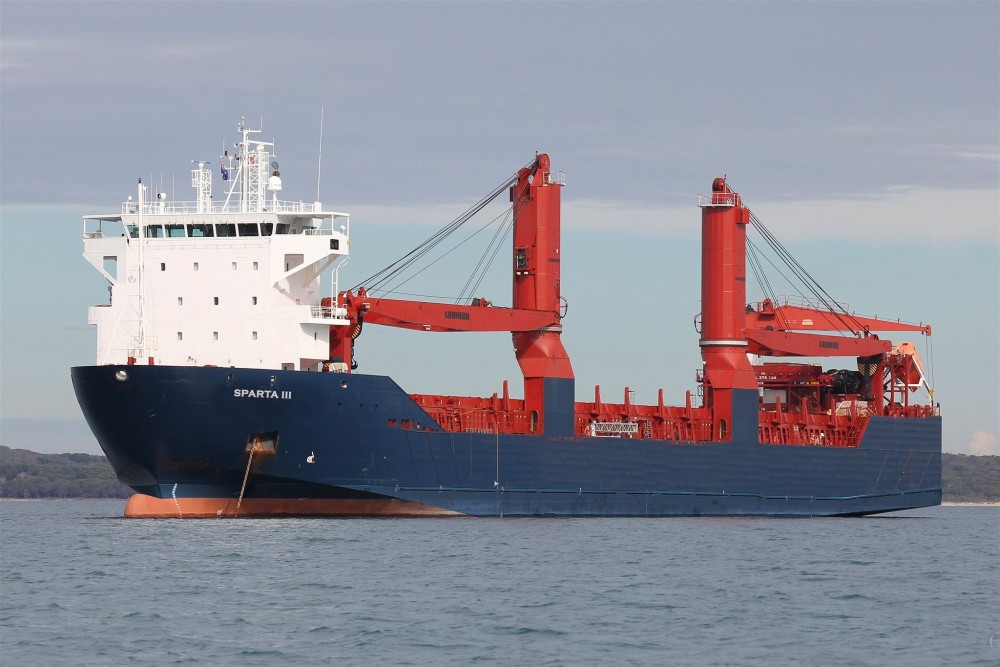 Three weeks after it got stuck in Arctic sea-ice, the Sparta-3 makes it into open waters. The military transport vessel did not have permission for sailing in the area.
Read in Russian | Читать по-русски
By

The Sparta-3 had been in Dudinka and got stuck in the Yenisey Bay on the 13th December as it returned towards Murmansk. Despite assistance from icebreaking support ship Kigoriak, the cargo vessel was unable to make it out of the ice captivity.

It took more than three weeks for the ship to get free. On the 6th of January, the Sparta-3 sails towards the Kara Gate, the southern tip of archipelago Novaya Zemlya. It is escorted by icebreaker Admiral Makarov. In the area is also support and rescue vessel Spasatel Karev.

There is light ice conditions in the area. As soon as the ships sail into the Barents Sea, they will encounter fully open water, maps from the Russian Arctic and Antarctic Research Institute show.

The Sparta-3 is owned and operated by Oboronlogistika, the military shipping company transporting goods and equipment to Russian military bases and towns.

The situation on board has been strained as reserves of fuel and water shrunk to low levels and the crew had to fight hard with icing.

The ship did not have the necessary permissions for sailing in the area. According to information from the Northern Sea Route Administration, the Sparta-3 could sail only on the westernmost part of the sea route, and no further east than Sabetta. Furthermore, the freight ship was allowed to sail without heavy icebreaker assistance only in waters either free of ice or with light ice.

In a statement, Oboronlogistika rebuffs information that it was not allowed to sail on the Yenisey. The reason for the problems was a delayed departure from Dudinka and worsened weather conditions, the military company argues.

However, nuclear power company Rosatom sees the case otherwise. According to Mustafa Kashka, General Director of Atomflot, the company unit that manages Russia’s nuclear-powered icebreakers, the Sparta-3 truly did not have permission to sail on the Yenisey at this time of year.

“Atomflot does not have information about why the shipowners of  container ship Sparta-3 decided to change the route and enter the Yenisey Bay without permission,” Kashka told TASS.

The Atomflot leader confirms that requests were sent to the captain of the Sparta-3 to explain the situation, but that no response was received.

“The shipowner was made aware that there were risks connected with the anticipated aid from nuclear icebreakers engaged in contracted operations. Never the less, the Sparta-3 set course for the port of Dudinka without permission,” Kashka says.

“They put their own shipping operation ahead of principles of safe sailing and the interests of other companies operating on the Northern Sea Route,” he adds.