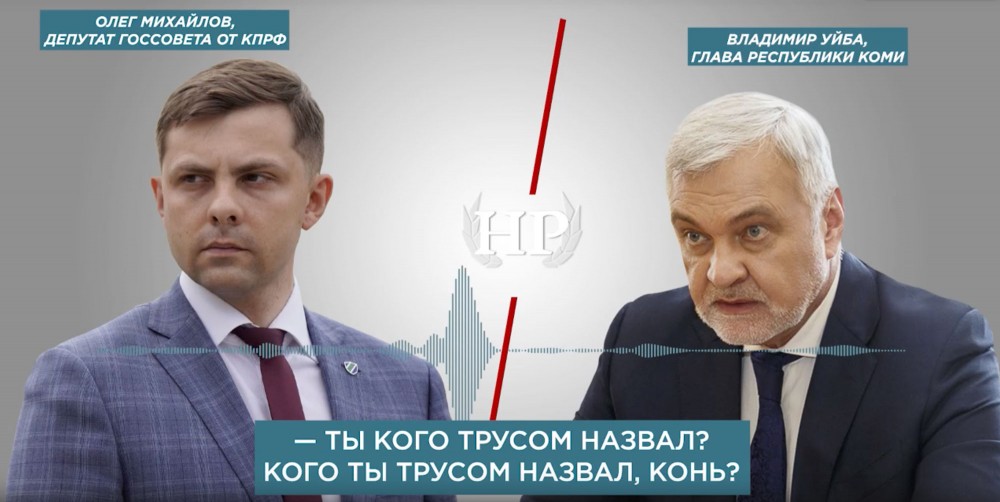 “I give you 24 hours to respond,” Mikhailov says in a video address. “Let’s see if you have the guts,” the regional politician underlines.

The clash between Mikhailov and regional Governor Uyba started in the State Council, the regional parliament, on 29th of April as the latter was delivering his annual speech on the regional state of affairs. Following the speech, Mikhailov took the floor and harshly criticized the governor for his handling of the coronavirus crisis and for having failed to attract federal funds to the region. He also called the recent governor’s election a “farce” and said Uyba acted as a coward when no real opposition candidates were allowed to run.

Mikhailov represents the Communist Party, and has over several years been an outspoken critic of the ruling United Russia, including its handling of the controversial Shies land fill project.

Governor Uyba reacted with outrage on the critical remarks from Mikhailov and subsequently approached him with outright threats. That conversation was recorded, and Mikhailov has now filed a suit at the regional General Prosecutor. He also challenges the governor in a duel; an open debate on public television.

The governor has gotten 24 hours to respond.

“In general, our political life is in such a state that the appointees of the country’s leadership ignore public debate and discussion with the opposition. […] But since I am a politician I decide all issues through debate and I am ready to discuss with any representative of the authorities. I expect him [Uyba] to consent and that we will meet live on republican television,” Mikhailov says. “And if he does not respond, all his statements and actions will characterize him as a coward,” he adds.

By the time of the 24 hour deadline, no response had come from Uyba.

The conflict between the two men now makes headlines across the country, and has even been commented on by Kremlin press spokesman Dmitry Peskov. In a statement, Peskov criticizes Mikhailov for having recorded the conversation and made it public and that it was simply “a talk between two men”, 7x7-journal reports.

At the same time, Governor Uyba and his supporters now argue that Mikhailov has violated regional parliament regulations and the opposition leader will consequently be refused plenary speech in the upcoming two parliament sessions.

Vladimir Uyba was appointed new regional leader in the Komi Republic by President Putin in April 2020. The appointment came as the north Russian region was seriously troubled by the coronavirus outbreak, and Uyba, a professor of epidemiology, was seen as the right man for the job.

In a subsequent election, Ubya was formally elected new governor with solid margine. But several opposition candidates, among them Oleg Mikhailov, were rejected participation.