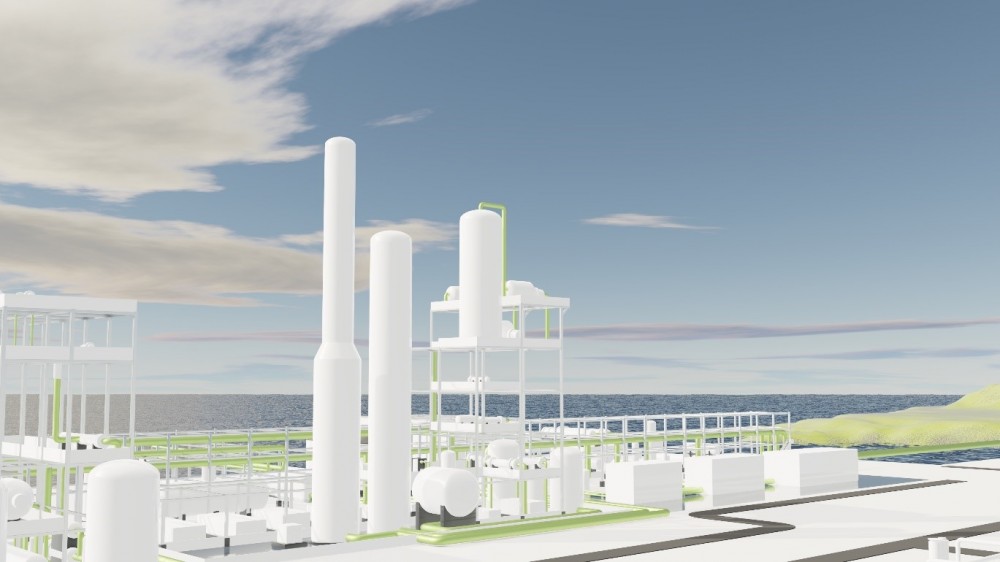 The planned green ammonia facilities on the coast to the Barents Sea. Illustration: Tek3d

The Nordic energy corporations ST1 Nordic and Horisont Energy have signed a memorandum of understanding to co-develop a green ammonia project in the Northern Norwegian district of Finnmark.
Read in Russian | Читать по-русски
By

According to the companies, the green ammonia produced will be used in a variety of sectors with the specified focus on the transportation and industry sectors. The project developers especially stress the importance of ammonia in being an environmentally friendly substitute for fuel in the shipping industry.

The Norwegian ST1 CEO, Kristine Vergli Grant-Carlsen, stated that, “decarbonisation of transport and industry is a massive challenge, and to solve it, we must couple the power sector with the end-use transport sectors like marine, aviation, and road freight transport, as well as industry”.

Approximately 80% of all the ammonia, a type of pungent gas, produced globally is utilized to make agricultural fertilizers.

Green ammonia production is the process of making ammonia which is both completely carbon-free and renewable. Green ammonia is most typically produced using hydrogen that comes from water electrolysis powered by alternate energy.

However, ST1 Nordic and Horisont Energy are planning to deviate from the typical production method of ammonia by opting for the usage of wind-fed electrolysis and hydrogen. The corporations are due to conduct pre-studies revolving around the possibility of achieving electrolysis using wind power and hydrogen from various feedstocks.

To achieve the wind-fed electrolysis, the companies are planning to use future ST1-produced wind power in Finnmark, from the 800 MV Davvi wind park, to power the electrolyser.  ST1 has already applied a permit for the development of the wind park, which is to be situated in the northern part of Eastern Finnmark.

Additionally, to make the production of the ammonia truly green, ST1 Nordic and Horisont Energy are going to explore the value chain for negative emissions to create carbon removal credits for commercialization from the processes of carbon capture and storage.

However, the developments of both the 800 MV Davvi park as well as the green ammonium are not as straight forward as they might seem. Ever since ST1 Nordic had presented their plans for the 100-turbine-large wind park, local groups have been protesting it. To them, the 78 square km area that will be occupied by the wind park (which is located too close to Rastegaisa mountain considered holy by many Sami communities) will get in the way of reindeer migration routes. The controversial nature of the 800 MV Davvi park puts the feasibility of the green ammonium project in question.

In the meantime, the trajectory of the green ammonia project is developing in conjunction with another ammonia project Horisont Energi has in Finnmark: using natural gas from the Snøhvit field to produce blue ammonia.

The plant is expected to be built in either Hammerfest or Nordkapp at the coast of the Barents Sea, with an investment decision ready towards the end of 2022.

However, blue ammonia is produced from natural gas with CO2 storage, making it a less favorable environmentally friendly alternative than green ammonia, which is produced through 100% renewable energy.

Commenting on their new memorandum of understanding for the production of green ammonium, Bjorgulf Haukelidsaeter Eidesen, the CEO of Horisont Energi, said that “Green hydrogen converted to ammonia unleashes the potential of renewables, ensures energy system efficiency and enables a carbon-neutral source of fuel and heat for our homes, transport, and industry, thereby making it instrumental in meeting the EU’s climate objectives”.

According to Eidesen, the true motivation for the project was Horisont Energi’s goal of becoming “a leading European provider of clean energy and carbon storage services”.