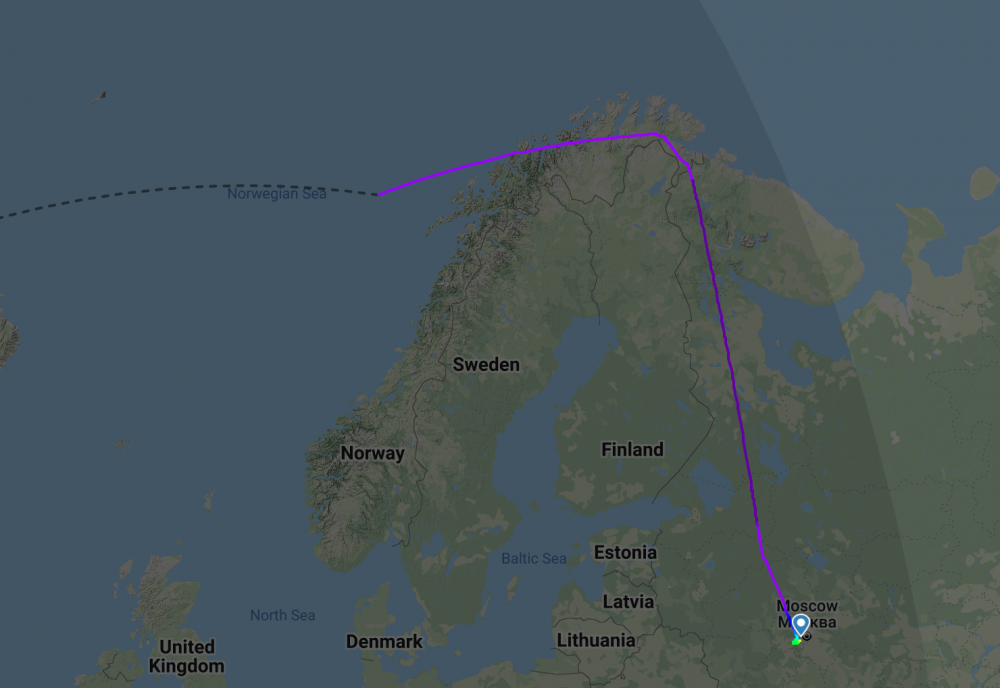 Denied to fly the shortest route over Sweden and Finland, the big IL-96 aircraft from Rossiya Special Flight Squadron headed north and entered Norwegian air space outside Tromsø before crossing over Finnmark region with exit at Svanvik in the Pasvik valley, before heading south towards Moscow. Screenshot from FlightRadar24

Rossiya’s Special Flight Squadron en route from Havana to Moscow had to make a detour via northern Norway. Onboard was Vyacheslav Volodin, the controversial Chairman of the Russian parliament.
Read in Russian | Читать по-русски
By

Volodin and other parliamentarians were on their way home from a visit to Cuba and Nicaragua when the pilots allegedly were told that the state-owned aircraft would not be allowed to enter Swedish and Finnish airspace.

The deviation of the plane from its original planned route is widely reported in Russian media on Saturday, as several reporters from the parliament press pool were traveling together with the delegation. Among them was Edward Chesnokov with Komsomolskaya Pravda, a reporter who detailed the flight pattern as the route was changed.

Flights between the largest city in Russia and tourist destinations in Central America are frequent and routes normally cross over Scandinavia a few hundreds of kilometers south of the Arctic Circle before the trans-Atlantic leg.

Komsomolskaya Pravda’s reporter describes how the delegation on February 24 suddenly understood that they had to cut short the official visit to Central America. This was when Putin’s forces attacked Ukraine. Therefore, the program in Nicaragua lasted only for five hours before take-off towards Cuba where the large Il-96 plane refueled and made ready for the long-distance home.

Somewhere north of the United States, information came that Swedish airspace was closed for the Rossiya’s Special Flight Squadron, according to the media reports. FlightRadar24, an online service tracking planes, shows how the delegation instead had to fly much further north. The plane entered Norwegian airspace outside Tromsø, from where the flight continued over Finnmark to Varangerbotn, then south to Svanvik in the Pasvik valley, from where the aircraft exited Norway and entered Russian airspace south over the Kola Peninsula.

By flying all north to Varangerbotn before turning south, the aircraft avoided Finnish airspace.

The detour added 2,5 hours to the flight. Volodin confirms in his own Telegram channel that the aircraft was denied to fly over Sweden and Finland and instead flew over Norwegian airspace. The plane landed in Moscow Friday evening. He also tells about the somewhat special flight to newspaper Gazeta.

While Vyacheslav Volodin has been on both the US and EU’s sanction lists since 2014 for his role in the annexation of Crimea. This week, the European Union agreed to put sanctions on all 351 members of the State Duma. Noway has made clear it will follow the same sanctions on Russia as the EU.

It is unclear why Norway allowed the Russian special aircraft to fly over the northernmost part of the country. Questions to authorities by the Barents Observer are for now unanswered.

Russia on Saturday closed its airspace to commercial flights from Bulgaria, Poland and the Czech Republic. Similarly, several European countries have banned Russian carriers like Aeroflot.

Sweden, Finland pull out of Arctic360 conference in Toronto where Russian diplomats scheduled to attend