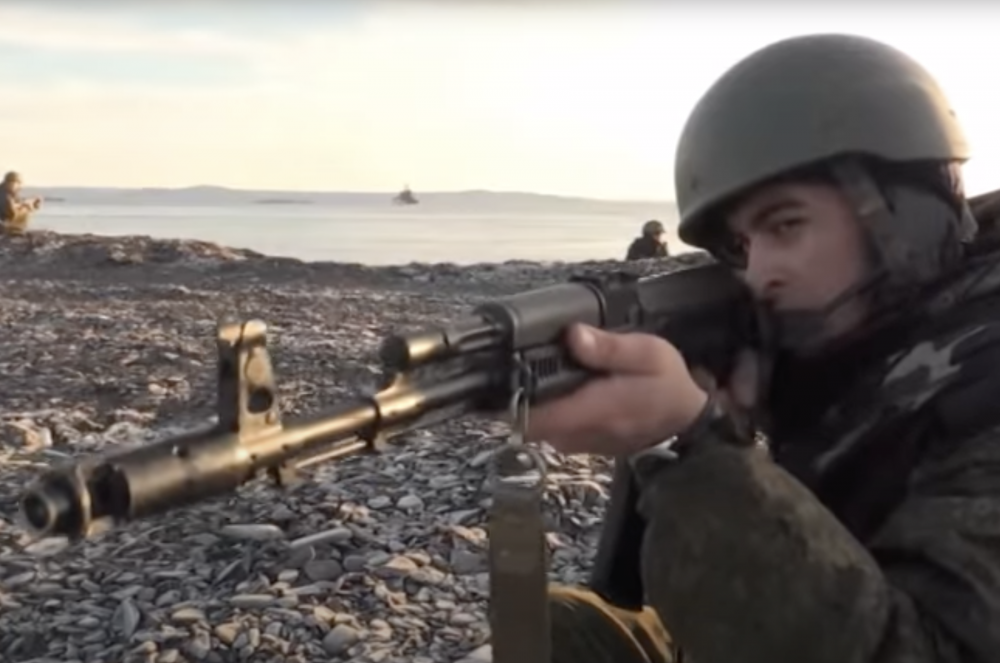 Three large assault landing ships from Severomorsk attack Ukraine with soldiers and amphibious vehicles from the 61st Naval Infantry Brigade. There are reportedly also soldiers, weapons and vehicles from the 200th Separate Motor Rifle Brigade in the border war zone to Ukraine.
Read in Russian | Читать по-русски
By

Two ships of the Ropuchas class, the “Olenegorskiy Gornyak” and “Georgiy Pobedonosets”, plus the Ivan Gren class “Pyotr Morgunov” are now involved in Putin’s illegal military attack on Ukraine.

The vessels sailed out from the Kola Peninsula last Christmas and sailed south along the coast of Norway. In January, the warships caused concerns as they were close to the Swedish island of Gotland.

Together with three other landing assault ships from the Baltic Fleet in Kaliningrad, the Northern Fleet vessels headed to the North Atlantic, the Mediterranean, made a short port call to Russia’s naval base Tartus in Syria before entering the Black Sea in early February.

Each of the Ropucha class ships can carry 10 main battle tanks and 340 soldiers. When sailing the Baltic Sea, the ships were reportedly heavy loaded and low in the water.

The “Pyotr Morgunov” is newer, larger and can carry 13 main battle tanks and up to 300 soldiers.

Likely, the soldiers brought to the shores of Ukraine in the early morning February 24 by the landing ships are from the Northern Fleet’s 61st Naval Infantry Brigade. The brigade is based in Sputnik military settlement, not far from the border to Norway.

Soldiers from this brigade has according to Bellingcat previously participated in the war in Donbass in 2014 and before that in the two Chechen wars in 1994 and 1999.

Over the last few weeks, several videos posted on Russian social media channels have displayed how military hardware, like tanks and armoured vehicles, have been loaded on train carriers near the 200th Separate Motor Rifle Brigade, also located in the Pechenga valley near the Norwegian border. The trains were filmed when heading south towards the Ukraine border.

The Northern Fleet’s third-largest warship, the guided-missile cruiser “Marshal Ustinov” is in, or west of, the Aegean Sea, as one of three Russian Slava-class warships currently in the eastern Mediterranean.

These are the same waters as the aircraft carrier USS “Harry S. Truman” operates. This carrier was supposed to participate in NATO’s Norwegian-led Cold Response exercise starting next month off the coast of northern Norway, but it is now unclear how the group will sail in the coming weeks. Pentagon has, for now, said the aircraft carrier group will stay in the area amid the Ukraine crisis. Also Norway’s frigate KNM “Fridtjof Nansen” is part of the carrier group.

Meanwhile, in the north, military tensions remain calm. The Northern Fleet ended an exercise in the Barents Sea earlier this week and the larger warships like the frigate “Admiral Gorshkov”, the nuclear-powered battlecruiser “Pyotr Veliky” and the anti-submarine destroyer “Severomorsk” are at port.

“There is no unusual activity in northern areas and we have not changed any patterns of our activity indifference to normal daily operations,” says spokesperson with the Norwegian Armed Forces, Major Elisabeth Eikeland in a comment to the Barents Observer.

“We are NATO’s eye and ears in the north, so we are monitoring like we always do, she adds.

Norway is one of few NATO member states with a direct land border to Russia and the two countries also share a long maritime border in the Barents Sea and Arctic Ocean. On Thursday, everything was calm and normal with the military border guards near Kirkenes, the Norwegian border town a 15 minutes drive from Russia.

Mayor of Kirkenes, Lena Norum Bergeng, says to the Barents Observer that she condemns Russia’s actions against Ukraine.

“I support and relate to the foreign- and defense policy of the government. I condemn Russia’s actions towards Ukraine, but I do not condemn the Russian people, who are our citizens, colleagues, neighbors, friends and family, Lena Norum Bergeng says.

“The dialogue and people-to-people cooperation will now be even more important than before,” she underlines.

Severomorsk is the headquarters of the Northern Fleet and home base to all the larger warships.

“Severomorsk is our friendship municipality and I will do what I can to continue our people-to-people cooperation with them and maintain our friendship,” the Mayor says.

Prime Minister Jonas Gahr Støre said at a press conference in Oslo Thursday afternoon that Norway will join the European Union’s package of sanctions on Russia.

“Russian authorities have the full and complete responsibility for throwing Europe into this very dark situation,” Støre said.

“We stand with the people of Ukraine in this terrible time.”