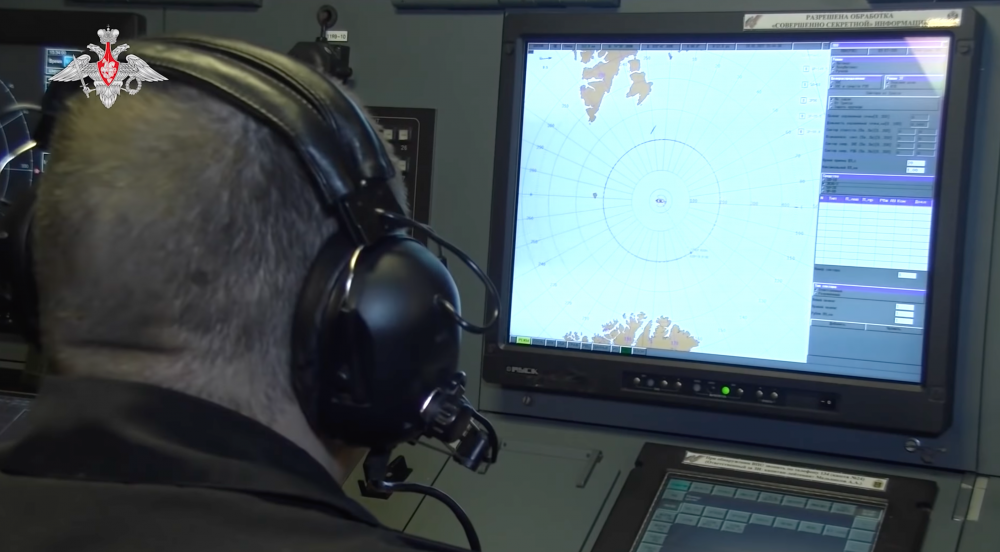 The Northern Fleet frigate "Admiral Gorshkov" was at a position of about 25°E between North Cape and Hopen when the Tsirkon cruise missile was fired. This is just east of the so-called Bear Gap which is of great strategical importance as the Barents Sea meets the deeper Norwegian Sea to the west. Photo from video by the Russian Defense Ministry

President Putin has praised the weapon as part of Russia’s new unrivaled missile systems but this is the first time ever such launch has taken place in waters between mainland Norway and Svalbard.
By

Firing of the Tsirkon missile took place during Russia’s large-scale strategic nuclear deterrence forces exercise (Grom 2022) on February 19. The drill included all three legs of the nuclear triad with a land-launched nuclear missile, a nuclear-missile-armed submarine and nuclear-capable strategic aircraft.

Unlike previous exercises with Russia’s strategic nuclear forces in the north, this year’s maneuvers included a frigate that sailed some 150 to 200 nautical miles west of the Russian sector of the Barents Sea. This is international waters but inside Norwegian Exclusive Economic Zone (EEZ).

About halfway between mainland Norway and Svalbard, the “Admiral Gorshkov“ suddenly fired the Tsirkon hypersonic missile.

The defense ministry in Moscow has posted a 50-second long video of the launch from the frigate. A short sequence of the film from the control room shows the warship’s location just east of the Bear Island.

Tsirkon, by NATO named SS-N-33, is a scramjet-powered, vertically launched maneuvering anti-ship weapon said to reach a speed of Mach 8 (eight times the speed of sound), or 9,800 km/h. Such speed means it can’t be intercepted by any existing missile defense systems.

The missile can be armed with a nuclear or conventional warhead and has been tested several times over the last few years in the Barents Sea and White Sea regions, both from surface warships and the latest class of multi-purpose submarine.

“The Tsirkon hypersonic cruise missile system falls into the category of “modern and sophisticated” weapon systems. If it has now been launched from Norway’s EEZ, this may indicate the beginning of a policy change with regard to the choice of test area,” says Senior Research Fellow, Kristian Åtland, with the Norwegian Defence Research Establishment (FFI).

“Whether this becomes a part of “the new normal” in the High North remains to be seen,” he adds.

Reportedly, Tsirkon has a range of about 1,000 kilometers for sea targets. It is not made public which target, if any, was hit by the missile launched from the westernmost part of the Barents Sea last Saturday.

Given the Tsirkon can hit targets at up to 1,000 km, the frigate’s position when firing was well within range to the waters where next month’s Norwegian-led NATO exercise Cold Response will take place. Here, near Vestfjorden, is it expected that both a British and a U.S. carrier group will operate together with other NATO navy, air and land forces.

Cold Response is the largest NATO exercise inside the Arctic Circle since the 1980ties. 28 nations and some 35,000 troops are signed up for the exercise which will test air, sea and land elements, for the most in the Ofoten and Troms regions and waters off northern Norway.

While the Russian Northern Fleet launched cruise and ballistic missiles, President Putin and Belarus despot Lukashenko followed the events on big screens from the Kremlin’s situation room in Moscow.

Putin was satisfied with what he saw.

“The tasks envisaged during the exercise of the strategic deterrence forces were completed in full, all missiles hit their targets, confirming the specified characteristics,” a statement from the Kremlin posted later the same day said.

Protection of the Northern Fleet’s ballistic nuclear missile submarines based on the coast of the Kola Peninsula is by Russia considered a must in case the country should engage in a larger international war scenario. Control of, and conducting denial of NATO forces, in the waters between North Cape and Svalbard is therefore of the highest priority.

The exercise on February 19, however, is the first time such bastion defense has been trained live with the newest set of missiles.

“Russia has been conducting weapon tests and live-fire exercises in Norway’s Economic Zone for quite some time. But the most modern and sophisticated weapon systems are usually being tested closer to home, in various parts of Russia’s Economic Zone outside the coast of the Kola Peninsula,” says Kristian Åtland.

As previously reported, the warning alert area issued for the Russian nuke exercise was the largest ever seen north of Norway in modern times. Norwegian Fishermen have repeatedly underlined that such large military closed-off areas trouble the fisheries substantially, both in time and money lost as the vessels have to sail over long distances to stay safe from missile shootings.

“The problem is not only that vast waters are occupied for exercises, but that the notifications come at very short notice,” said Sturla Roald, juridical advisor with the Norwegian Fishing Vessel Owners Federation in a previous interview with the Barents Observer.

“We experience that the exercises have increased both in scope and intensity in recent years, which means that Norwegian vessels more and more have to interrupt fishing and sail out of fish-rich areas.”

The Fishing Vessel Owners Federation has called on Norway’s Foreign Ministry to raise the issue with Russian authorities.

“This is normal. Russia had announced this exercise in normal ways. It took place in international waters,” Huitfeldt says to the Barents Observer. The Minister said the fishermen should raise their concerns with the Defense Ministry in Oslo.

In the last week of January, Irish fishermen and the Foreign Minister in Dublin protested against Russian plans to conduct live-fire shootings about 240 kilometers southwest of Irland in international waters.

The protests made Russia’s Defense Minister, Sergey Shoigu, change his mind and move the planned exercise outside the Irish exclusive economic zone.

Anniken Huitfeldt makes clear that she has no plans to act similar to her Irish colleague.

“That was a very different situation,” she says, but would not elaborate.

For Norway, keeping military tensions in the high north low is important.

The press service of the Northern Fleet in Severomorsk informs that all larger warships that participated in the Barents Sea exercise are now back in port.

In addition to the frigate “Admiral Gorshkov” that includes the nuclear-powered battlecruiser “Pyotr Veliky” and the anti-submarine destroyer “Severomorsk”.