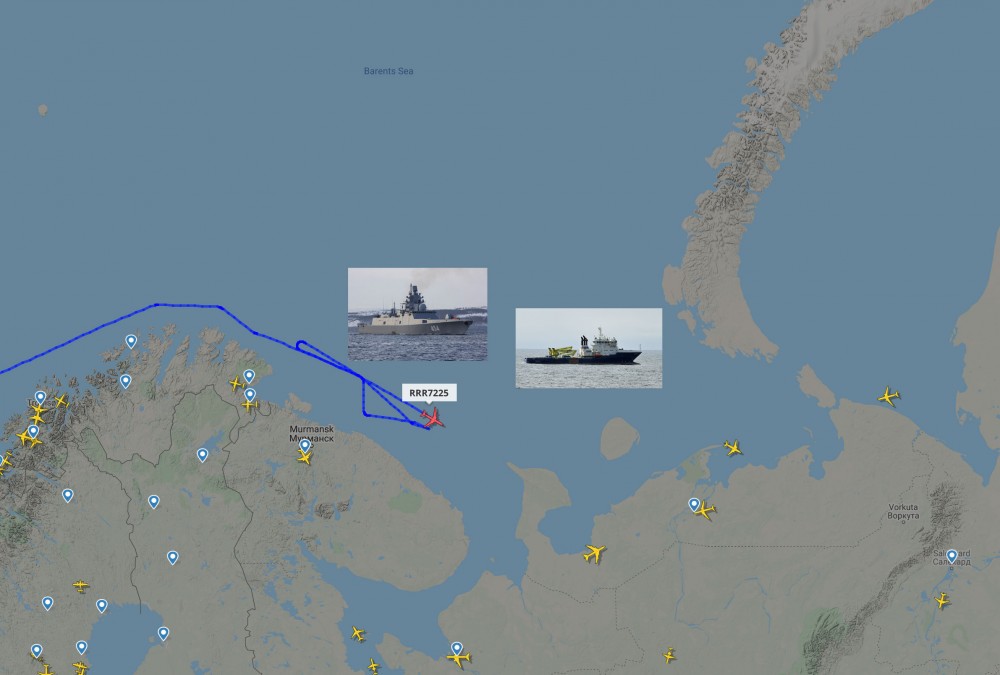 Russia new frigate "Admiral Gorshkov" on Thursday fired a Oniks cruise missile from the waters outside the Kola Peninsula. Two of the Northern Fleet's logistics support ships were in position west of Novaya Zemlya to monitor the missile's path.
Read in Russian | Читать по-русски
By

It is the press service of the Northern Fleet that informs about frigate “Admiral Gorshkov” was sailing the Barents Sea to perform combat training, including with missile and artillery weapons at sea targets. Later on Thursday, it was confirmed that the frigate successfully had launched a Oniks cruise missile and hit a coastal target on Novaya Zemlya, about 300 kilometers from launch position.

State-affiliated news-agency TASS on March 24 reported that “Admiral Gorshkov” was supposed to conduct a test of the new hypersonic cruise missile Tsirkon. That info, however, is removed in a later update.

Last October, the “Admiral Gorshkov” launched a Tsirkon from position in the White Sea and for the first time hit a sea target in the Barents Sea.

Additional to carry test versions of the Tsirkon missile, the Russian frigate can also be armed with the new advanced Kalibr and Oniks cruise missiles. The range and high-precision of these missiles are said to be a game-changer for the Northern Fleet’s warfare capabilities in the Arctic and North-Atlantic.

Also Thursday afternoon, the Northern Fleet’s two logistics support ships, “Elbrus” and “Ilya Muromets” were in position southwest of Novaya Zemlya, according to the AIS tracking of the two vessels displayed by exactEarth ShipView. The vessels were in the area to monitor the path of the cruise missile from ”Admiral Gorshkov” towards the southern island of Novaya Zemlya. The press service of the Northern Flett said in a statement the vessels were there to protect the waters from civilian shipping.

The two support ships were earlier this week sailing the Matochin Strait which divides the northern and southern island of Novaya Zemlya.

Currently, the Murmansk division of the Administration of Sea Ports of the Western Arctic has several warnings issued to civilian shipping for the Barents Sea, including areas marked with rocket shooting and artillery shooting. Interesting, also a huge area from around the coast of Novaya Zemlya is marked “forbidden to navigate for all vessels”. The banned waters are from the shore and out along the coast on both the Barents Sea and Kara Sea sides of the archipelago.

The Matochkin Strait, where the “Elbrus” and the “Ilya Muromets” were anchored just outside the military settlement of Severny, is the centre for Russia’s subcritical nuclear testings in the area. As previously reported by the Barents Observer, the launch site for Burevestnik nuclear-powered cruise missiles was re-established at the Pankovo launch site south of the Matochkin Strait last autumn.

It is also known that Russian military is making ready to test the nuclear-powered underwater drone Poseidon in real environment, although no details about location is made public.

A British RC-135W reconnaissance aircraft was Thursday afternoon circling in the skies over the waters where the Russian frigate “Admiral Gorskhov” was sailing outside the Kola Peninsula. This is the second time in a week, such British spy plane are flying back and forth north of the heavy militarized Kola Peninsula. The plane left the area around 3.30 pm CET, about the time the dark is coming to the eastern Barents Sea.

The events in the north take place simultaneously as NATO’s foreign ministers meet in Brussels, a meeting where Russia’s military buildup is highlighted.

Secretary General Jens Stoltenberg said at the press conference on Wednesday that NATO will continue to adapt its deterrence and defence “including when it come to the growing Russian missile threat.”

This article was updated on March 26, 8 am (CET) with latest news.