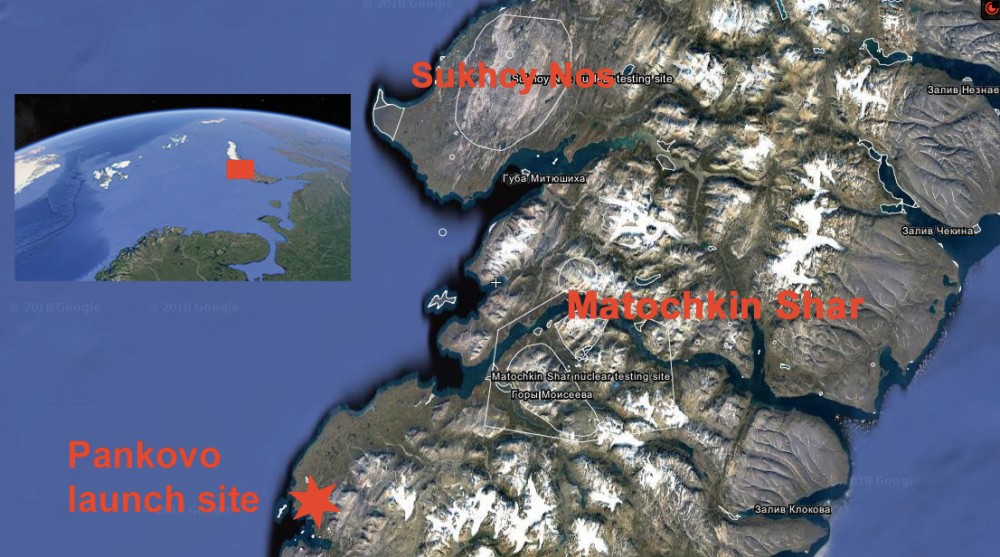 Satellite images from September this year shows high activity with new structures at the Pankovo site on Novaya Zemlya where Russia in late 2017 tested its nuclear-powered cruise missile.
Read in Russian | Читать по-русски
By

The satellite images are taken by Planet Labs and analyzed by the two researchers Michael Duitsman and Jeffrey Lewis with the Middlebury Institute of International Studies.

CNN was first to report about the two American researchers’ findings.

Duitsman and Lewis write in a blog-post about the findings: The launch pad where past missile launches were conducted is rebuilt and the pad is reoriented in a new direction more to the east, compared to the 2017 structure which had a more northern direction. A large number of the well-known blue shipping containers are visible in two areas, including at what could be a missile check-out building. Thirdly, a new helipad is constructed at the site.

The first known tests of the Burevestnik nuclear-powered cruise missile took place from Pankovo in November 2017.

The flight path was then north with a target impact area at Sukhoy Nos north of the Matochkin Shar, an area known from the days of atmospheric hydrogen bomb tests, including the giant Tsar Bomba in October 1961.

The November 2017 test, however, was not successful, and as previously reported by The Barents Observer, U.S. intelligence sources claim the missile to have crashed in the Barents Sea, a suggestion supported by the fact that several military-related support vessels were searching the west coast of Novaya Zemlya afterward. Among the vessels was Rosatomflot’s Serebryanka, a ship also involved in the ill-fated lifting of a Burevestnik missile from the seabed outside Nenoka test site in the White Sea in 2019 when five Rosatom employees were killed and a radioactive cloud spread across the nearby city of Severodvinsk.

The Serebryanka is equipped to handle radioactive material from the missile’s reactor core.

It was in March 2018 Russia’s President Vladimir Putin in his annual state-of-the-nation speech bragged about the un-stoppable nuclear-powered cruise missile with nearly unlimited range.

An advantage with such a missile, according to Putin, is its capabilities to avoid any anti-ballistic missile defense systems.

A big fear with testing a missile powered by a nuclear reactor is the possible releases of radioactive gasses into the atmosphere during the flight, since the uranium core has a partly open-air cooling circuit.  Also, upon impact, the small-size reactor will most likely be smashed and could release radioactivity, either that is on land or offshore.

Traces of radioactive iodine is in the air