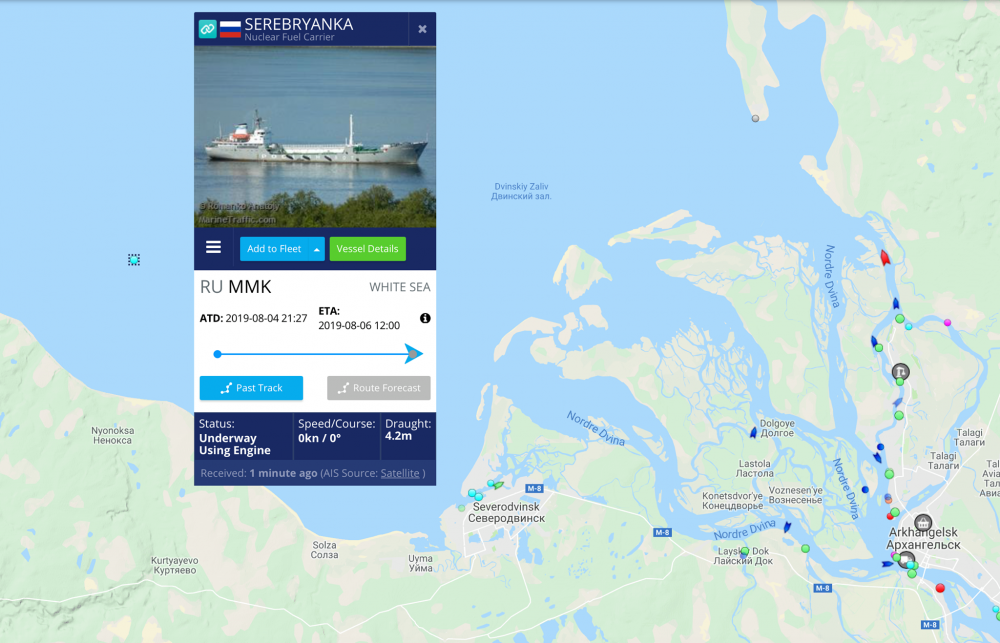 It is still a mystery what prompt the jump in radiation and why the nuclear fuel carrier “Serebryanka” is still at anchor in the closed-off waters a few nautical miles outside Nenoksa military test site in the White Sea.

It was Thursday at 9 am a missile engine exploded at the naval test range west of Severodvinsk.

Radiation levels were several times higher than background for about half an hour around noon on Thursday, according official data from a paper published by the Nuclear Safety Institute of the Russian Academy of Science. The data is based on the public automated monitoring system in Severodvinsk with eight sensors in town and at the Zvezdockha shipyard.

While normal background in the town with a population of 190,000 is around 0.11 µSv/h (microsivert per hour), the levels measured at the monitor on the Lomonosov Street near Lake Teatralnoye peaked at 2 µSv/h, nearly 20 times higher gamma radiation than normal. That, though, is still way within permissible levels for population exposure.

Radiation increase peaked between 11.50 and 12.30 local time and was back at normal levels at all location by 14.00, head of the Civil Protection Department of the administration in Severodvinsk, Valentin Megomedov, told regional news agency in Arkhangelsk 29.ru on Thursday.

Interesting, the information about the increased radiation, first published on Thursday at 14.23, was removed from the city authorities’ portal Friday afternoon and is now just a dead-link. One user at a blog forum saved a copy of the original message, regional news-site 7x7 journal reports.

Russia’s Defense Ministry was shortly after the explosion informing media that no “dangerous substances” were released to the atmosphere and that the radiation level is “normal.”

Nenoksa is about 25 kilometers northwest from Severodvinsk (about 45 km by road). The military testing area is closed for outsiders. A few mobile video- and photos, however, have appeared on social media.

Some photos published by Mash internet news-channel show emergency services personnel in radiation protection suits coming out of a helicopter, checking the surroundings with what appears to be a Geiger counter, before a injured person is transferred to a waiting ambulance.

Two people died in the explosion, while seven were injured and brought to hospitals in Severodvinsk and Arkhangelsk, according to official sources, quoted by TASS news agency.

A unconfirmed Telegram message says six of the injured are diagnosed with radiation exposure and were transferred with two planes to the Burnasyan Federal Medical Biophysical Cente in Moscow.

A tweet posted Friday shows a film of the victims being transported in ambulances. The text reads: “The drivers of the ambulances are dressed in chemical protection suits and the cars are wrapped in film… The victims of the explosion test in Severodvinsk were brought to Moscow. … Well you understand.”

“2 µSv/h in Severodvinsk might mean that the levels at the location of the incident, which is tens of kilometers from Severodvinsk, were even higher, and this increase might mean that beta- and alpha radionuclides were released into the atmosphere,” says Senior Nuclear Campaigner with Greenpeace Russia, Rashid Alimov to the Barents Observer.

He now calls for transparent information from authorities.

“Information on radionuclides present in the air, fall-out, in samples of soil and research into external and internal doses in the settlements closer to the place of discharge should be made public,” Alimov says.

Greenpeace has appealed to Rosportrebnadzor, Russia’s consumer watchdog, to establish how high the radiation has risen and whether it pose a health risk to people.

No radiation measured in Norway

In Norway, the Radiation and Nuclear Safety Authority (DSA) says in a press release Friday evening that the agency has reasons to believe the incident in Arkhangelsk [region] caused releases of radiactivity. DSA first said it had not got any official information about releases from Russia.

None of the Scandinavian measurement stations for radioactivity have seen anything unnormal, the agency says, but underlines that the monitoring will be intensified.

Many details of the accident at the naval test range remain unclear. The Defense Ministry says the cause of the accident was an explosion while testing a liquid propulsion system, and the explosion triggered a fire.

Nenoksa is well known for testing naval ballistic missile engines and cruise missiles of various types. There are, however, no logic reasons for any such missiles to have a source of radioactivity, unless it is an industrial source of radioactive Cobalt or Cesium in use for one or anther research reason during the testing.

If so, traces of the isotope(s) should be easy to discover.

After the fatal explosion, port authorities in Arkhangelsk informed all civilian vessels on the Dvina River basin and in the White Sea that the waters north of Nenoksa is closed-off to shipping for the coming month.

One ship, though, stayed at anchor inside the close area for more than 30 hours until it slowly started to move Friday afternoon: the special radiological service vessel “Serebryanka”.

“Serebryanka” has been at anchor a few nautical miles north of Nenoksa since before the explosion Thursday morning.

The ship belongs to Rosatomflot and is normally at port at the base for nuclear-powered icebreakers in Murmansk. In the 1980s and very early 90s, “Serebryanka” was used to transport liquid radioactive waste from the Atomflot facility in Murmansk to dedicated dumping areas in the Barents Sea.

In recent years, the ship has transported liquid radioactive waste from Atomflot to a treatment facility in Severodvinsk, as well as operated between Nerpa and Skhval naval yards on the Kola Peninsula and Atomflot in Murmansk. The ship has also transported containers with spent nuclear fuel from the closed-down naval base of Gremikha.

More interesting, the “Serebryanka” was sailing the waters west of Novaya Zemlya at the time after it is believed that Russia carried out a flight test of the Burevestnik nuclear-powered cruise missile (NATO name SSC-X-9 Skyfall) in November 2017.

As reported by CNBC, the missile crashed and was lost at sea shortly after launch from the temporary facilities at Pankovo south of the Matochin Shar at Novaya Zemlya. According to The Diplomat, “Serebryanka” was likely taking part in the recovery operation last summer.

The flight path starts at Pankovo, continues over shore for the first few seconds, then turn north over the waters at the inlet of the Matotchkin Shar dividing the northern and southern islands of Novaya Zemlya, before continuing towards the Sukhoy Nos, which is believed to be the impact area for the test, the Barents Observer reported at the time.

The last test shooting of the Burevestnik missile at Pankovo took place in February 2018 and the facility was dismantled and shiped away during last summer.

One problem, it appeared, was the presence of American WC-135 special-purpose aircraft frequently flying the easter Barents Sea close to Russian airspace. The WC-135’s mission is to collect samples from the atmosphere for the purpose of detecting and identifying radionuclides.

The White Sea area on the other hand, is Russian airspace. Since October 2018, satellite images show that a new construction has been erected at the Nenoksa test site, which resemble the facilities removed from Pankovo on Novaya Zemlya.

Many facilities at the Nenoksa test site were dismantled or left to themselves. But since Oct 2018, a new construction has been erected which resemble facilities seen at Pankovo or Kapustin Yar used to test e.g. 9M730 “Burevestnik”.
Probably related to 3M22 Zircon… pic.twitter.com/9QiKGfGIVA

“Serebryanka”, which left port in Murmansk towards the White Sea on August 4th, could have been in the area to either transport the missile or to pick it up from the sea after testing.

The Burevestnik missile is equipped with a small nuclear reactor.

If the missile fuel that exploded at Nenoksa site happened while testing a nuclear-powered cruise missile which uses a propellant engine in the start, radioactivity could have been released from possible damages of the small reactor.

The existence of the nuclear-powered cruise missile was first made public by President Vladimir Putin in his annual speech last year, as reported by the Barents Observer.

The President sent a clear message to the United States. Russia has developed new missiles and an underwater torpedo that would be immune to ballistic missiles shields and other means to stop a nuclear attack.

“Nobody has anything like this,” Putin said simultaneously as a video film of the test shooting from Novaya Zemlya as well as an animation was displayed on big screens. One of the screened weapons Putin presented was the new nuclear-powered cruise missile.