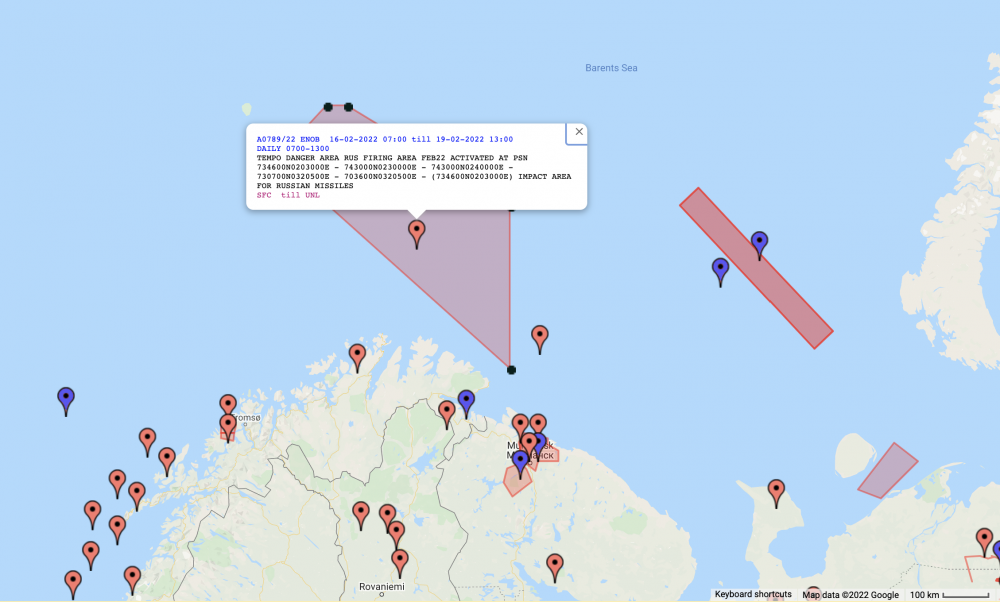 The danger zone warning is set for the period February 16 to 19, daily between 07.00 and 13.00. Screenshot from notaminfo.com

"Impact Area for Russian missiles" reads the warning covering an area from the Varanger fjord in the east almost to the Bear Island in the northwest. Norwegian fishermen say it is "totally unacceptable."
Read in Russian | Читать по-русски
By

“The Russian NOTAM is the largest since the Cold War. It is the largest ever in modern times,” confirms Major Elisabeth Eikeland, spokesperson with the Norwegian Armed Forces, in an email to the Barents Observer.

The alert zone is about 1,000 kilometers long and stretches from Russia’s Kolguyev Island in the eastern Barents Sea to the Bear Gap in the west. Half of the distance is inside Norwegian Exclusive Economic Zone (EEZ) in international waters.

The Bear Gap is a military term for the strategically important waters from the North Cape, via the Bear Island and north to Svalbard. This is where the Barents Sea meets the deeper Norwegian Sea, and by that access to the North Atlantic.

In a conflict scenario, keeping control of the Bear Gap would be important for the Russian Northern Fleet to protect its strategic missile submarines in the eastern Barents Sea from NATO forces.

The Russian NOTAM (Notice to Airmen) is aimed at alerting civilian aviation to stay away as military missiles shootings will take place. The alert does not specify which missiles might come. However, the Northern Fleet’s largest warship “Pyotr Velikiy” sailed out from Severomorsk this weekend to the Barents Sea. The nuclear-powered battle cruiser is armed with Kalibr missiles, among other weapons.

There are also other multi-purpose submarines and surface navy ships in the area that are armed with cruise missiles. Launching cruise missiles from east of the Varanger fjord against potential targets in the western Barents Sea is a scenario Russia’s Northern Fleet also drilled last February. However, last year’s NOTAM-alert near the Bear Island covered a much smaller area.

Senior Research Fellow Kristian Åtland with the Norwegian Defence Research Establishment (FFI) is an expert on Russian military. He has studied developments both near Ukraine and in the Arctic, including NOTAM alerts.

“This Russian NOTAM area is larger than usual, and it extends well into Norway’s Exclusive Economic Zone in the western Barents Sea, north of Norway’s territorial waters. As for the vertical extension, the announced danger area starts at the sea surface and has no upper limit, so it is likely to affect fisheries, ship and air traffic in the period between Wednesday and Saturday,” Åtland says to the Barents Observer.

“Further east, in the Russian Economic Zone, Russia has announced similar closure areas in the same period. Thus, most of the southern Barents Sea has temporarily been designated as a military danger zone.”

The Barents Observer has previously reported on the closure areas in Russia’s EEZ in the Barents Sea.

Signaling to the West

Kristian Åtland says the upcoming missile shootings might very well be part of Moscow’s signaling strategy to the West in times of increasing tensions.

“It remains to be seen what kind of missiles, if any, will be launched, and from where. The Russian NOTAM warnings may well be related to a preplanned strategic nuclear forces exercise. But in the current geopolitical context, it is natural to see the Russian exercise activity in and over the Barents Sea as part of a more comprehensive signaling strategy,” Kristian Åtland says.

“The problem is not only that vast waters are occupied for exercises, but that the notifications come at very short notice,” said Sturla Roald, juridical advisor with the Norwegian Fishing Vessel Owners Federation in a previous interview with the Barents Observer.

“We experience that the exercises have increased both in scope and intensity in recent years, which means that Norwegian vessels more and more have to interrupt fishing and sail out of fish-rich areas.”

The fishermen organization has also this week underlined that “it is totally unacceptable” that another country can act like this in such a large area on such short notice.

In January, Irish fishermen and the Foreign Office in Dublin protested a Russian announced exercise in Irish Exclusive Economic Zone (EEZ). The protests made the Russian Defence Ministry move the exercise to outside Irish EEZ.

The Barents Observer has repeatedly asked the Foreign Ministry in Oslo about possible similar requests to Russia on moving the Northern Fleet’s exercises out of areas important for fisheries in Norway’s EEZ, but the ministry did not respond to the inquiries.

The Norwegian Fishing Vessel Owners Federation writes in an article on February 15 that their letter to the ministry in Oslo has neither received any answer.