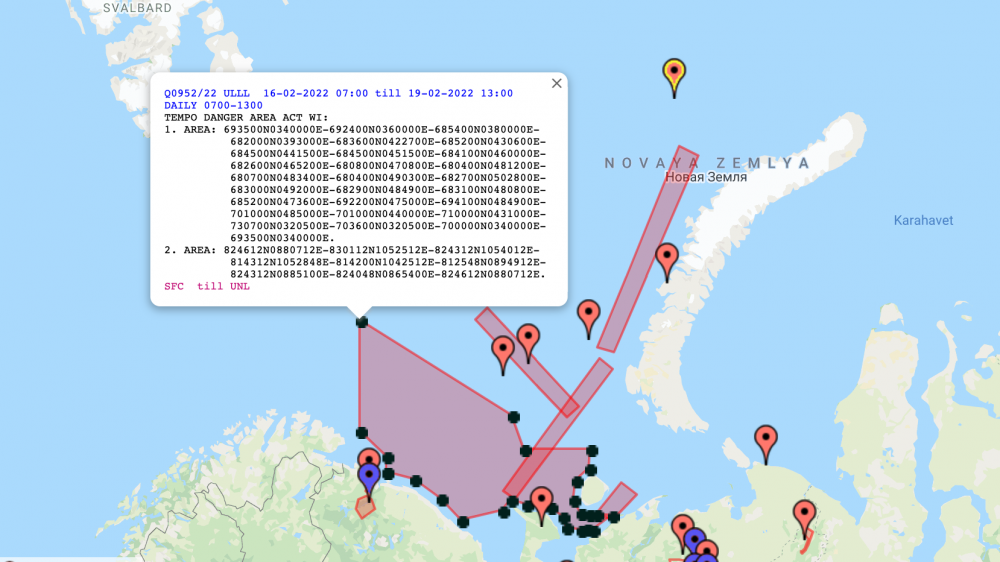 The largest area with aviation danger warning, issued for February 16-19, stretches into Norwegian Exclusive Economic Zone in the Barents Sea North of the Varanger Peninsula. Screenshot from Notammap.net

More or less the entire southeastern Barents Sea is affected by military activity from February 16 to 19.
Read in Russian | Читать по-русски
By

Russian aviation authorities on Sunday announced NOTAM (Notice to Airmen) warnings for the week ahead, with closure of an area from the Kolguyev Island in the east to several tens of nautical miles west of the maritime delimitation line with Norway, a distance of about 650 kilometers.

Only a narrow shipping lane corridor along the coast of the Kola Peninsula is kept open.

In addition to alerting civilian aviation, the Port Administration of northwestern Russia in Murmansk has issued coastal warnings (PRIPs) for seafarers in areas all as far into the Norwegian Exclusive Economic Zone as 23°W. That is west of North Cape where the Barents Sea meets the Norwegian Sea.

Also this warning is activated for the period February 16 to 19.

The alert is marked with “Rocket launches” and is valid from 7 am to 1 pm, which is the timing with daylight so far north this time of the year. Other coastal warnings for the week ahead are published for areas in the eastern Barents Sea and the White Sea.

“We are aware of the NOTAM warning. It is notified via the established channels for international aviation,” says spokesperson for the Norwegian Armed Forces, Preben Aursand, in a phone interview with the Barents Observer.

While there are very few direct military contact lines between NATO states and Moscow, the Norwegian Join Headquarters near Bodø maintains regular Skype talks with the Russian Northern Fleet’s Headquarters in Severomorsk.

Aursand says no information about the upcoming activity is this time given directly via the military-to-military channel.

“The warnings are in international waters and Russia is in its full right. But we expect that they will assure safety in the area.”

Aursand will not speculate on what sort of military rocket launchings will take place. “We will monitor the activities,” he says.

Normally, when a civilian space rocket with satellites is launched from Plesetsk in a northwestern direction towards orbit, a much smaller danger zone is activated north of the Kola Peninsula, and possibly further into the Arctic north of Svalbard.

The enormous size of the military alert for the Barents- and White Seas could be an indication that long-range missiles are to be launched. Previously when testing the naval hypersonic Tsirkon cruise missiles, waters both south and north of the Kola Peninsula have been closed off for civilian aviation and shipping.

Another possibility is testing of one or several ballistic nuclear missiles from submarines, or even a full-scale exercise for the triad of nuclear forces with launchings of ballistic missiles from both subs, the Plesetsk cosmodrome south of Arkhangelsk, and nuclear cruise missiles from launched strategic bombers.

Last time Russia carried out a massive nuclear forces exercise was the Grom-19 in October 2019, a drill led by President Putin.

One of the NOTAM warnings is for a spot at 83°N northwest of Novaya Zemlya in the Arctic Ocean, a typical location where the second stage of a ballistic missile on its way to the Far East of Russia will fall down.

Russia’s closure of the Barents Sea comes amid tensions over Ukraine as both Moscow and Western officials push for diplomatic solutions.

This weekend, Washington and several European capitals told citizens to leave Ukraine. Also, embassy staff from many countries in Kyiv are told to leave.

On Friday, Vladimir Putin and Joe Biden talked on phone in an attempt to de-escalate tensions. The call between the two presidents was “professional and substantive”, but there was “no fundamental change in the dynamic” according to a release from the White House.

Norway’s Prime Minister, Jonas Gahr Støre, recently underlined that “a new war in Europe will have consequences for our relationship with Russia, also in the North.”

He quickly added that the conflict must “move into a political track,” and that Norway will “continue to work for a good and cooperative neighborly relationship with Russia.”