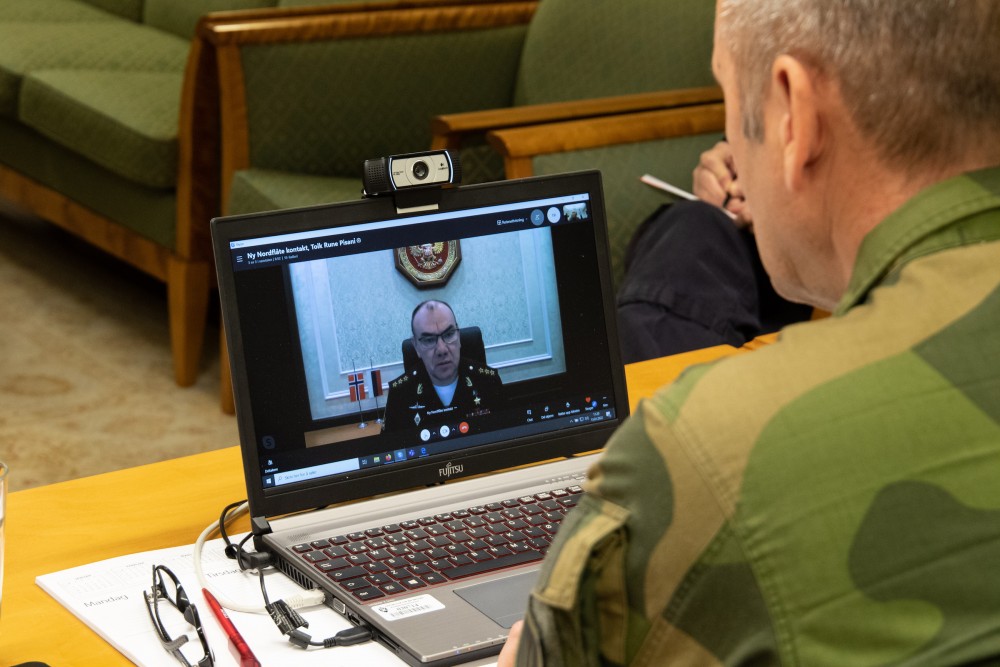 As a week of high-profile diplomacy between Russia and the West ended in deadlock, a way more successful Commander-to-Commander meeting in the high north went under the radar of attention.
Read in Russian | Читать по-русски
By

“We want an open and transparent dialog around what is the practical arrangements in connection with the upcoming exercise in order to avoid misunderstandings,” said Chief of the Norwegian Joint Headquarters, Lieutenant General Yngve Odlo, after Thursday’s talks with the Russian navy’s strongman, Commander of the Northern Fleet Admiral Aleksandr Moiseev.

Odlo and Moiseev have maintained Skype contact after NATO in April 2014 decided to suspend all practical cooperation with Russian military officials in response to the Ukraine crisis.

From his desk at the Norwegian Armed Forces operational commando-center, located inside a mountain at Reitan near Bodø, Lieutenant General Odlo in detail informed Admiral Moiseev about NATO’s Cold Response 2022, a large-scale exercise where most of the training will take place north of the Arctic Circle, on land, at sea and in the air.

As reported by the Barents Observer earlier this week, NATO will send two aircraft carrier groups to the exercise in March and early April. With more than 35,000 soldiers, Cold Response will be the largest so far north in Europe since the 1980ties.

And never since before Ronald Reagan and Mikhail Gorbachev met in Reykjavik in 1986 have tensions between Moscow and NATO been more troubled than over the last few weeks, following Russian military buildup along the border to Ukraine.

Security talks aimed to deescalate tensions ended without results. First, the bilateral meeting between U.S. and Russia in Geneva on Monday, followed by talks at the NATO headquarters in Brussels on Wednesday. On Thursday, Council members at the Organization for Security and Cooperation in Europe (OSCE) met in Vienna.

“There is a real risk of a new armed conflict in Europe,” said NATO Secretary-General Jens Stoltenberg at a news conference following the meeting in Brussels.

On Friday, Russia’s Foreign Minister Sergey Lavrov said at a press conference in Moscow that he was displeasured with the way the talks had ended. “We’re very patient, but our patience has run out,” he said.

During last NATO exercise in Norway, the Trident Juncture 2018, Russian Northern Fleet warship sailed in and suddenly announced plans for missile launches in areas of international waters overlapping the NATO warships and aircraft were exercising.

While Russian military activity outside the coast of Norway is normal during exercises, both sides are well aware that it is in times of tension that incidents and misunderstandings could trigger unwanted escalations.

Asked by the Barents Observer if possible Russian NOTAM-warnings (Notice to Airmen) in the Norwegian Sea at the upcoming Cold Response was a talking point in the Skype meeting, spokesperson of the Norwegian Armed Forces, Preben Aursand, said no such topic was brought up.

Aursand, however, said that Russia will officially be invited to send OSCE-observers to the exercise in accordance with the Vienna Document. The invitation will be sent to Moscow in early February.

The press service of the Northern Fleet in Severomorsk confirms that the Skype meeting included assurances from the Norwegian side that Cold Response strictly will adhere to principles of confidence and security building, as adopted in the OSCE Forum in 2011 outlining transparency when arranging major military exercises.

In December last year, Norway and Russia signed an updated version of the bilateral Incidents at Sea agreement, aimed to avoid actions that could trigger dangerous situations, accidents, or military misunderstandings. First signed in 1990, the amended agreement now includes drones, a ban on dangerous use of lasers and other technical updates.

In the period after 2014, several dangerous incidents between Russian and NATO aircraft or warships have happened both in the Black Sea region and in the Baltic Sea. In the Arctic and Barents Sea region, however, only a few military incidents are reported. Russian ships or aircraft have not violated Norwegian territorial waters or airspace.

The main action during Cold Response 2022 will be by navy and air force capacities in the Ofoten area between Bodø and Tromsø in northern Norway.

Spokesperson Preben Aursand said some activities will take place in Porsanger in Norway’s northernmost region Finnmark. Participating soldiers in this area, though, will primarily be Norwegians, Swedes and Finns.

Although Porsangermoen military camp, its training area, and the nearby Banak airport all are more than 200 kilometers from the border to Russia’s strategically important Kola Peninsula, the Norwegians are keen to reassure Moscow that activities here are purely defensive in nature. Therefore, no NATO activities or exercises take place anywhere near the Russian border.

The aim of the Norwegian-led defensive exercise later this winter is to train reinforcement of an allied/partner under challenging Arctic climatic conditions. Cold Response 22 will have more emphasis on the sea and air domains than Trident Juncture 18, which had a greater footprint on land.