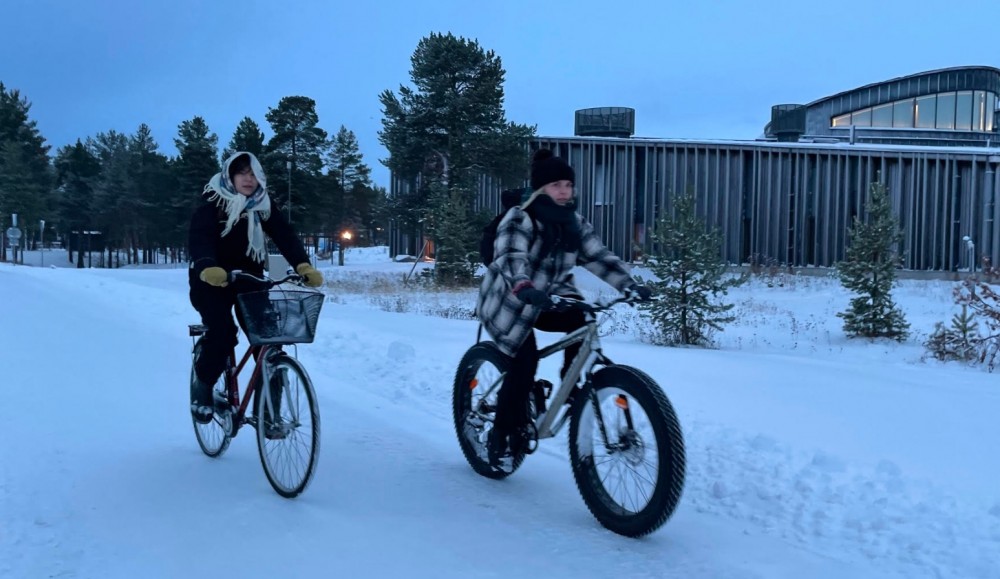 Cycling in the town of Inari. Photo: Atle Staalesen

Utsjoki is the northernmost municipality in Finland, where River Teno marks the border between Finland and Norway. Known as the best salmon river in the North, tourists have previously flocked to the river banks every summer for decades. In the summer of 2021, the drastically diminished salmon stock caused the decision to ban salmon fishing. With next year’s salmon fishing season’s fate still unclear, the municipality is acting fast to offer alternative options to support the local economy.

Part of this change is the possibility to develop the route 970 as an international level bike road. It is expected that in the next few years, cycling will become an increasingly popular form of travel and so called ‘soft adventure’. Natural Resources Institute Finland has launched a project called STIL - Slow travel in northern rural landscapes. The project maps out possible cycling routes all around northern Finland, and considers the safest routes which will be promoted to potential visitors. Similarly, an EU funded project called ‘The Arctic Bikepacking Trail’ predicts that cycling is an increasingly popular form of tourism which can bring more clients to the northern businesses.

Regional road 970 runs from Karigasniemi to Utsjoki and further to Nuorgam, running on the southside of River Teno. The road has often been dubbed as the most beautiful road in Finland, and for a good reason. Driving along the road in a car seems like a waste - the scenery along the River Teno should be taken in slowly, and that is not something that should be seen from a car going 80 kilometres per hour.

Northern municipalities are working to make travel more sustainable and encouraging cycle rides is a great way to begin. There are also hopes that an increase in cyclists will revive the area, bringing cafés and stop spots to the route. It will be an interesting opportunity to locals as well - most likely people will not yet be making their work commutes with the route but it could offer more recreational activities for the locals. With the electric bicycles becoming more popular, the longer distances will be easier to cycle through. Inari municipality is having similar ideas to Utsjoki- the local council is looking to construct a paved pedestrian and cycling route from Saariselkä to Inari. For years, cyclists from all around the world have been making their route to the North Cape through Finland, cycling through the main roads. The narrow roads between the towns, together with wildlife and the already increased summer traffic has caused the cyclists to move at their own risk. If successful, the project could help the sustainable tourism industry and pave the way for a safer, more organised cycle route in northern Finland.

Sistonen explains that the project works to inform visitors of how to act responsibly - not to leave rubbish in nature or leave any trace of their visit. But one important aspect is the sociocultural aspect; “We wish that [the visitors] would get to know the culture and learn before they come here,” Sistonen says. “That way the expectations would meet the reality” she continues. Sistonen hopes that this would ensure that travellers would respect the local culture. Utsjoki is the only municipality in Finland that has a majority population that is Sámi. “We think that cycling and other zero emission ways of travel could bring customers to the companies along the River Teno that are suffering because of the salmon fishing ban,” Sistonen explains.

It seems that tourists coming to Finland are increasingly looking for sustainable options and soft adventures - and the northern municipalities are working hard to meet these new demands. Because of the threat of climate change and increased interest in sustainability, it is important that the municipalities are responding to this change. Cycle routes in the north would make cycling safer and be a great way to spend time for both the tourists as well as the locals.