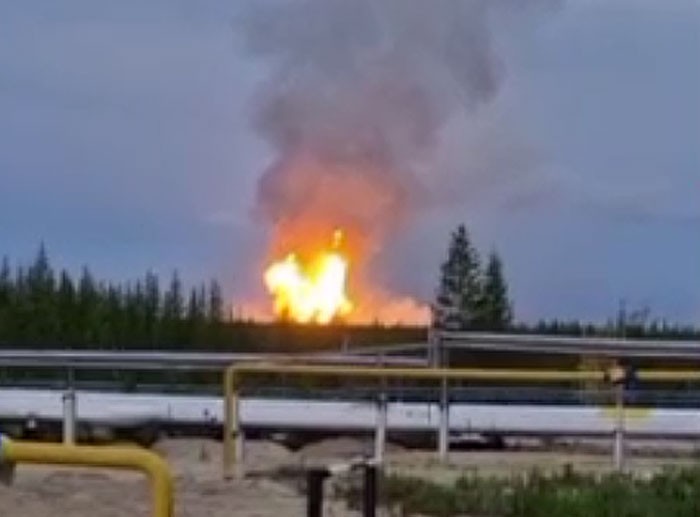 Screenshot from video of fire in June 2022

A raging blaze at the far northern Urengoy field is to be put out by a shot from an anti-tank gun.
By

A Il-76 airlifter on the 15th of September took off from the Samara region with course for the Yamal-Nenets province. On board was a 100 mm Rapira anti-tank gun.

The flight comes after the Russian Central Military District responded positively to a request to assist in the extinguishing of the fire that has raged at Urengoy since September 11th.

The outbreak of the fire followed a loss of pressure at the well, Interfax reports.

According to the Russian Armed Forces, the anti-tank gun will fire a shot at the wellhead equipment, which is to help operators install anti-blowout equipment.

A person involved in the operation says to Interfax that equipment and infrastructure on site remains intact and that production at the huge natural gas and condensate field is not threatened.

The fire at Urengoy is the second in only few weeks. On the 16th of June, a fire erupted after a pipeline burst near one of the production units.

A person involved in the operation indicated to Telegram channel Gaz Batyushka that the fire was triggered by Gazprom dispatchers that did not timely reduce production volumes following a halt in operation of Siemens compressors.

The Urengoy is Russia’s biggest natural gas field with reserves up to 10 trillion cubic meters. It is operated by Gazprom Dobycha Urengoy, a regional subsidiary unit of national energy company Gazprom.

The natural gas company is today under mounting pressure as exports are slashed following the standoff with the EU.

Russian natural gas storages are today bristling full and Gazprom is forced to either cut production or burn the gas.

A lion’s share of the company’s fields are located in the Yamal Nenets Okrug, the region that stretches into the far northern Kara Sea. According to regional authorities, production in 2021 amounted to 617,5 billion m3, a 13 percent increase from 2020.

It is far from the first time that heavy armament is applied to halt a blowout at a Russian oil or gas field. In 1980, a blowout triggered a violent fire at the Kumzhinskoye field in the Nenets region. It was not extinguished until a 37,6 kiloton nuclear detonation was conducted at 1,500 depth in the well.